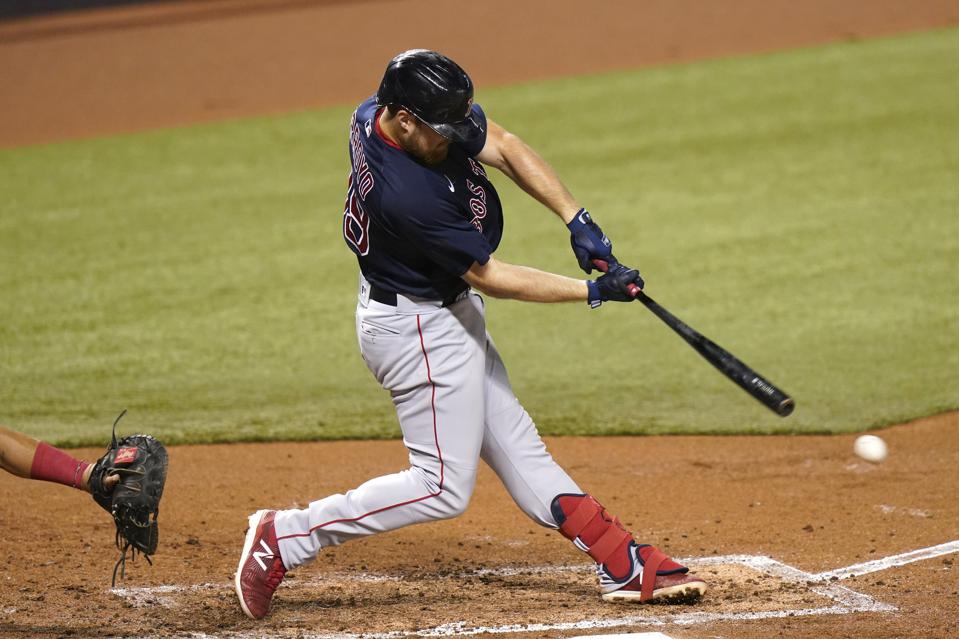 2021 was an exciting year for Red Sox fans and the city of Boston. They played (mostly) great playoff baseball, had some signature moments, and got themselves to within 2 wins of the World Series. The Red Sox undoubtedly wouldn't have made it as far as they did without meaningful contributions from unlikely players. Let’s take a look at 5 of those players that helped the Red Sox in 2021.

While his stats don’t jump out at first glance, Christian Arroyo provided a much needed defensive presence at 2nd base, with flashes of power. He was a clubhouse leader and a fan favorite throughout the year, with his positive attitude and happy-go-lucky demeanor. Acquired off waivers in 2020, his performance in 2021 was an unexpected surprise, and another brilliant acquisition by Chaim Bloom.

While nagging injuries limited him to just 57 games, he slashed .262/.324/.445 with a 106 wRC+ and 6 home runs. He raked off lefties, batting .319 with a 136 wRC+. He produced 1.2 WAR, which translates to nearly 4 WAR in a full season, a fantastic mark. He had some timely hits, most notably being his go-ahead and eventual game-winning grand slam against the Braves on June 16. But his most impactful contribution to the Red Sox was his defense. With the Red Sox being thin at 2nd base all season, he stepped up and produced 5 DRS in just 387 innings. For example, a superstar second basemen like Marcus Semien produced 11 DRS in nearly 3.5 times the innings.. Arroyo provided defensive stability, and was the only starting infielder on the Red Sox with a positive DRS.

An off-season of recovery and a healthy full season will only boost Arroyo’s value to the team, and he could emerge as an above-average everyday second basemen. While he has been injury prone for most of his career, being able to focus on a single position rather than his former utility role should help limit injuries and hopefully help him flourish even more in the next few years.

Arauz is another guy whose stats don’t necessarily tell the whole story of his impact. He had a -3 DRS at 2nd base. He hit .185 with a 72 wRC+. Not exactly impressive. But Arauz stepped up when the Red Sox were rampaged with COVID in mid August and early September, and provided stability when they had almost no middle infielders.

Arauz’s best moment with the Red Sox came in a crucial game against Cleveland on August 27. They had struggled in the month of August, going 11-16. They were in the worst of the COVID outbreak, and in this particular game fans saw Yairo Munoz, Jarren Duran, and Arauz get penciled in as starters, a fairly tell-tale sign of lack of depth. And with the Red Sox down 3-1 in the bottom of the 8th inning, things were looking grim. But after the Red Sox put two on with none out, Arauz stepped up to the plate looking to bunt, and flip the lineup back to the top. Even after his first two attempts failed miserably, Arauz kept his approach the same and tried to make solid contact.

"I was actually upset at myself during the first couple of pitches. I couldn't get the bunt down. I didn’t necessarily change anything — my approach or my focus," Araúz said. "I just wanted to make sure to put a good swing on it. … I know I took the at-bat to a 3-2 count, and at that point I said, ‘Alright, I’m just gonna make sure I get a really good swing on this and hit the ball hard some more.’" (Boston Globe) Arauz proceeded to smash a frozen rope over the right field wall, which gave the Red Sox the lead and eventually the win.

That wasn’t the last of Arauz’s big moments with the Red Sox. He hit 2 more home runs in 2021, both giving the Red Sox insurance en route to victories. And even though he played sparingly in the last month of the season, he has potential to be a solid utility option for the Red Sox, with a flair for the dramatic.

Red Sox nation collectively does not talk enough about Nick Pivetta. While he sometimes lacked consistency, he came up huge down the stretch for the Red Sox, and showed his ability to be a middle of the rotation starter. Acquired along with Connor Seabold in an extremely lucrative trade made by Chaim Bloom, he took a big step forward in 2021 after a rough start to his career.

When Nick Pivetta was picked up from the Phillies in August 2020, it largely flew under the radar. He was coming off a dismal 2019 where he produced a 5.38 ERA and a 5.45 FIP, and didn’t produce a positive WAR. He barely pitched in 2020, and expectations going into 2021 were low. He was projected as a fringe back end starter, or potentially a long relief option. But he was given an opportunity to start early in 2021, and ended up pitching well, with a 2.81 ERA in April.

While Pivetta struggled in July and August, he came back strong in September after a bout with COVID. He put up a 3.79 ERA, with quality starts against the playoff-bound Yankees and White Sox. An unforgettable moment came when he struck out Juan Soto looking to clinch a Red Sox playoff berth on October 3rd. Pivetta ended the regular season with above average peripherals in fastball velocity, fastball spin, curveball spin, and K%, an intriguing sign of a developing pitch repertoire. Pivetta’s curveball was his best pitch in 2021, with opponents batting a measly .165 against the pitch. Continuing to develop his sinker and slider will help Pivetta get more swings and misses in the future.

Even with an inconsistent regular season, Pivetta put together an incredible postseason, highlighted by his performance in ALDS Game 3. While the Red Sox and Rays fought through 13 innings, Pivetta not only saved the Red Sox bullpen for an eventual game 4 victory, he pitched exceptionally. Pivetta went 4 innings, each with a different celebratory trot off the mound. He struck out 7 with just 3 hits and 1 walk. His gutsy and emotional presence on the mound helped fuel the Red Sox to a classic walk-off win, with Christian Vazquez launching one into the monster seats in the 13th inning. Pivetta rolls into 2022 coming off the biggest games of his career, and his value to the Red Sox organization has skyrocketed since his rocky 2020.

Coming off a rough year in 2020, Josh Taylor was looking to bounce back. He had only thrown 7 ⅓ innings in the shortened season, and had dealt with left shoulder tendinitis. His 8 appearances that year weren’t pretty. 9.82 ERA, 5 walks to just 7 strikeouts, and career low peripherals. It was only a small sample size, but Taylor was a big question mark coming into 2021, and his role in the bullpen wasn’t determined.

Taylor struggled early in the season, giving up 6 earned runs in his first 3 appearances of 2021. His sinker was getting hammered, and with 2 remaining minor league options, his future in the majors remained to be seen. Taylor was running out of chances with the Red Sox. But after a rough outing against the Mariners on April 24th, something changed. From April 30 to July 5th, Josh Taylor didn’t give up a single run, earned or unearned. In May and June, Taylor only gave up 8 hits. His slider was practically unhittable, with a -12 run differential and a .198 opponent batting average. His 26 consecutive scoreless relief appearances was the 2nd longest in Red Sox history, to Koji Uhera’s 27 game streak in 2013.

Josh Taylor was one of the most important Red Sox pitchers of 2021. Along with his absolute dominance, he was the only reliable lefty for the majority of the season. His ability to get swings and misses (92nd percentile in Whiff%, 83rd percentile in K%) contributed to his immense success. With a lackluster defense and low peripherals in exit velocity, limiting balls put in play helped Taylor immensely. He posted a career high WAR and career low FIP, at 2.83. He excelled in high leverage situations, with opponents batting a measly .111 with a .139 wOBA (weighted on-base percentage). Under team control through 2026, Taylor is developing into an elite set-up/stopper for the Red Sox, and should be a staple of the Red Sox pen for years to come.

This wouldn’t be a proper list if Garrett Whitlock wasn’t included. Whitlock was not only the most unlikely contributor for the Red Sox in 2021, and he was one of the most important players on the entire team. Selected from the Yankees in the Rule 5 draft, Garrett Whitlock put together one of the best Red Sox rookie seasons in recent memory, and had a massive role in the Red Sox success.

When the 25 year old righthander arrived at spring training in February, he was thought of as a question mark, kind of an experiment by Chaim Bloom. He hadn’t pitched since mid-2019, recovering from Tommy John surgery. He had never pitched above Double A. There were concerns about his health and how he would perform in the Major Leagues. These doubts were all valid, and it remained to be seen how Whitlock would adjust to life in the MLB. But once Whitlock made his major league debut against the Orioles on April 4, it was clear the Red Sox truly had found a diamond in the rough.

From April to October, Whitlock was the most reliable and versatile Red Sox pitcher. He could close games. He could give you distance, often going 3+ innings. He finished with an elite 1.96 ERA and 2.64 FIP. He limited home runs and barrel rate (95th percentile). In fact, the Georgia native had a long list of elite peripherals; 90th percentile in xWOBA, 90th in xERA, 85th in xSLG, 86th in BB% and 86th in fastball velocity. It doesn't end there. Opponents batted just .185 against his change-up, and he produced an overall -24 run differential with his pitch mix. Red Sox fans should be forever thankful for ex-Red Sox reliever Matt Andriese after he taught Whitlock his devastating change.

Garrett Whitlock truly came out of nowhere in 2021, and was essential to the Red Sox throughout the season. Perhaps the most exciting part about Whitlock’s potential is his ability to start games, which he didn’t do at all this past year, to properly recover from his injury. If Whitlock put together another season like 2021, he has the ability to be a top of the rotation pitcher with an elite pitch mix and velocity.