It's almost June, which means we're exiting phase 1 of the season and entering trade season. That also means it's time to take stock of the Red Sox budget & payroll and examine how that might affect what they'll do before the trade deadline.

Let's get right to the meat: where does my payroll model say the Sox are with budget? Amazingly, my model projects them a miniscule $0.02M ($20k) under the first tax threshold! Of course, that's just a projection, and the real value is unknowable (even to the Red Sox), but we'll get into that later. In reality, this number is roughly +/- $2M due to injuries and bonuses and barring any trades or major moves. 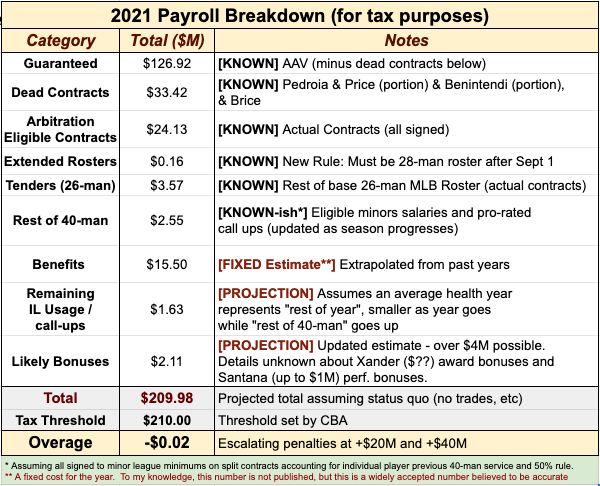 The table above is roughly ordered in terms of how well we know each value. In reality, we know all but the last two lines almost exactly. In the end, the true status quo budget is not precisely knowable because it depends on how the season plays out in terms of injuries (more injures means more players making major league salaries) and performance bonuses. These are represented as the last two rows and only total $3.74M in my model. This doesn't really leave a lot of wiggle room. Neither number can possibly end up near zero, as you will inevitably have injuries and we have too many achievable bonuses.

My current projected bonus total is based on projecting the current playing time through the rest of the season. This value is dominated by Marwin Gonzalez (projected $950k bonus), Renfroe ($600k), Sawumura ($250k) and Perez ($300k). There's also reportedly up to $1M in bonuses included in Danny Santana's contract, but the thresholds are not published to my knowledge. Xander Bogaerts also reportedly has Award bonuses (e.g. MVP, All-star, etc) whose details haven't been published. As it's going, Xander might have some real shots at some major awards. In the end over $4M are possible. While you might claim Gonzalez and Renfroe's playing time might go down due to Santana (and later Duran?), those bonus savings might be lost to the uknown bonuses to Santana and Xander that are not currently in my model.

We already know the Sox are trying to stay below the first payroll tax threshold this season. Now that the season is going well, maybe they'll be willing to change course and blow past the threshold and acquire some big money players. But that would render this entire article moot, so let's assume they are sticking to staying under the first level luxury tax.

The biggest recent change is that the Sox purchased the contract of Danny Santana at a prorated value of $1.75M. Coupled with the DFA of Brice and eating his $870k contract means we're closer than ever to that first luxury tax threshold. If interested in where we stood a few weeks ago, check out this post.

But what does all this mean? For one, the Sox have roughly a 50/50 chance of "accidentally" going over the first tax threshold this season just by chance even if they do nothing. Of course, they won't let this happen. They will either find a way to shed some money in some trades, or will decide to go all-in and cruise past the first tax threshold in a playoff run.

Personally, i'm guessing they'll stick to the original plan of staying under the tax threshold. They seem worried enough about the unknown new CBA coming this offseason that they don't want to risk future penalties, even if a rational person sees them as likely quite minor.

In a perfect world, the Sox find a way to shed Marwin Gonzalez to a team willing to eat the rest of his salary this year. Together with his likely bonuses, that'd save the Sox nearly $2.5M in tax dollars and provide a decent safety net to stay under the tax threshold. Unfortunately, Gonzalez has looked awful, and unless he turns it around we'll have to pay off a team with serious prospects in order to get them to take him off our hands. Therefore, I expect the Sox will sneak shedding money into a larger trade so it's a little less noticeable that we're paying prospects to unload a contract. For example, maybe they go for a solid and low-salary bullpen arm, trading a top-20 prospect (or two) along with Chavis and Gonzalez. The other team maybe immediately DFAs Gonzalez, but they don't care. They can sell it as getting a prospect and a reclamation project in Chavis.

But that's just one of nearly infinite possibilities. What are your proposals for trade season that both add needed talent and shed at least a couple million in the end payroll?