My memories of Rick Miller as a very young-to-maturing fan was:

A. He always seemed to be there

B. He always played a reliable, and sometimes excellent, center field

D. He always had a knack for getting on base and was generally a tough out.

E. But had absolutely no power

F. And finally, but surely not least...he had a very respectable moustache!

And a lot of that stands up once you start diving into his stats and history. Miller played most of his career in Boston, and for a surprising duration. Twelve of his 15 years were spent in Boston (1971-77, 1981-85), which is frankly pretty impressive. He appeared in 1101 games for Boston, and was generally the starting center fielder or frequently-deployed 4th outfielder.

Miller walked a fair bit during his career, pretty consistently at or over 10%. The .081 ISO tells the other side of the story. He had speed, but wasn't an accomplished base stealer. But remember - this was before precision. There was a LOT of bad base-running in those days. The 70's and early 80's were a black hole for offense. Rick Miller was very much a THAT era kind of guy.

Miller first cracked the big leagues in 1971 for a cup of coffee, and got more exposure the next year as a defensive replacement/part-time outfielder (89 games, 111 PAs). In 1973 he became the starting center field and had a very respectable 2-WAR season. He was the primary starter the next year, and was also pretty good, although in more limited fashion. But it also marked a coming change. Namely, some fellow called 'Fred Lynn'.

Sure enough, starting in 1975, the Sox outfield was Jim Rice, Fred Lynn and Dewey Evans, left to right. And ain't nobody was gonna break through that! Even Yaz, he by then was a first baseman, would play in the outfield. It was a tough hurdle for someone like Miller to jump. So he left via free agency after 1977, signing with the Angels.

It was in Cali that Miller saw his most consistent playing time as the pretty decently established center fielder. He even netted a Gold Glove - a testament to his fielding ability. But he came back to Boston after the 1980 season, in the most conflicted Boston trade for me - favorite player Rick Burleson departed, bringing back Carney Lansford - a non-Sox player I liked quite a bit, Mark Clear, a very respectable relief pitcher, and Miller.

He was the unambiguous starter in center in '81, in the strike-shortened year, and the following season as well. But the Sox traded for Tony Armas, and 35-45 dinger power trumps "slap-hitting solid fielder" any and every day. Even now, and especially then. Alas, after that, Miller saw a steady decline over the final three years from 'rotational 4th outfielder' to 'veteran hang-around'. He hung it up after the 1985 season.

Rick Miller always seemed to be the 'transition guy' - If he was starting for you, you were probably looking for his replacement, but not too hard, because he generally did a pretty decent job. He could hold down a key defensive position with authority, and not hurt you at the plate (or even help). Amusingly, he was replaced as starter by Fred Lynn twice - first in Boston, 1975, and then again in California, a month before the Angels traded for Lynn. Then, later by slugger Tony Armas. At least it wasn't for some schlubs.

All in all, my memory holds up pretty well on Miller. There were a few other things noteworthy regarding him, both pretty cool. First, he was very involved with the Jimmy Fund and other charities, frequently visiting sick kids in hospitals. Also, he married Carlton Fisk's sister, Janet Marie.

Oh, and the moustache? You be the judge: 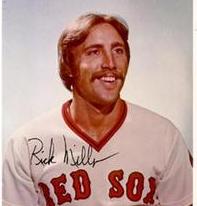