With constant talk of the lack of an ace, the biggest advantage for the Red Sox is the great unknown 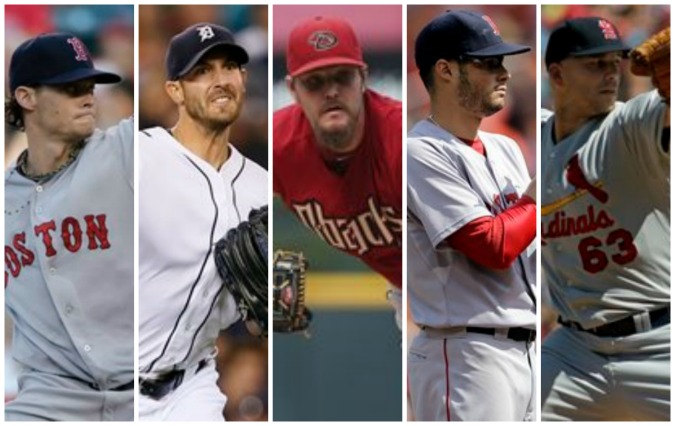 With spring baseball in full swing and Opening Day just a few weeks away, the definition of beating a dead horse has directly been involved with the Boston Red Sox. That figurative dead horse is the notion that the Sox have a potent offensive lineup, but are doomed for failure this season because of their lack of an essential "ace" in their starting pitching rotation.

We have all heard it a million times. Clay Buchholz, Joe Kelly, Rick Porcello, Wade Miley and Justin Masterson are all average pitchers, "number 3 starters", none capable of commanding a pitching staff and being the number one guy. While that statement may relatively be true, as none of those five starters have won Cy Young awards or pitched lights-out over the course of their young careers, I am here to explain one thing and one thing only.

Why can't one of these "average" starting pitchers eventually turn into and perform like an ace? Who says that can't happen?

Listen, I agree with what some naysayers and experts have been saying about Boston's rotation. In today's MLB, you absolutely need a guy on your pitching staff who you can rely on to shut down the opposing team every time he takes the hill. You need a guy who you know will give your team a chance to win every time out. You need a guy who can take the mound in Game 1 of the World Series and strike fear in the opposing offense. You need that, you really do. All I am saying is, I firmly believe that at least one of the five starters currently projected to lead the Red Sox rotation in 2015 can evolve himself into being the ace that everybody around baseball has been begging for. Here are just a few reasons why.

AGE, AND ELEMENT OF DISRESPECT
To start off, the Red Sox staff is young. The average age of their five starters is just 27.8 years old. Most MLB pitchers enter the prime of their careers around this age. After surviving the initial growing pains that come with being a major league pitcher, guys tend to have their breakout seasons in their years approaching 30. Last year's Cy Young award winner, Cleveland's Corey Kluber, won the award at 28 years old after a 2013 season with a 3.85 ERA. Rick Porcello is just 26 years old coming off a 3.67 ERA in 204 innings pitched. Just sayin'.

Additionally, these guys have been disrespected and bad-mouthed for the last month. Everyone is doubting them and calling for Boston to make a trade for Phillies left-hander Cole Hamels to save their rotation. Clay Buchholz recently made headlines by making "He's the ace" t-shirts for the group and giving one to each starter. These five guys are rallying around each other and pitching with a chip on their shoulder, which should only motivate them even further to prove everybody wrong.

DEFINITION OF A "BREAKOUT" PITCHER
In today's day in age, pitching success is hard to sustain over the course of time. Take Justin Verlander, for example. In 2011, Verlander won the Cy Young Award after posting a 2.40 ERA with a gaudy 250 strikeouts. Fast forward three years to 2014 and Verlander has lost his form while watching his earned run average and strikeout numbers decline each year. Now, look at Houston Astros number one starter Dallas Keuchel. Keuchel started 38 games in his first two seasons in Houston and had a 5.21 ERA. In 2014, Keuchel posted a sub-3 ERA while logging 200 innings as the ace of the Houston rotation. Like I said, dominant pitching in the MLB can come out of nowhere. Lets take a look at the top 10 finishers in ERA each of the last three seasons:

The point is, breakout pitchers happen every year. Aside from the freak show that is Clayton Kershaw along with the Felix Hernandez' of the world, starting pitching success in the MLB is difficult to maintain. Every single season, there are a few guys who come out of nowhere and post sub-3 earned run averages and win 15+ games. These guys on the Red Sox staff know how to pitch. They also have one of the best pitching coaches in the league as their manager in John Farrell. They don't need all 5 guys to have the best season of their careers, but it is very likely that at least one will perform well enough to make the Fenway Faithful forget about losing Jon Lester.

HARD TO PREDICT PITCHING SUCCESS, HEALTH
As I have touched on earlier, pitching success in modern-day major league baseball is hard to predict. So many different factors come into account as a pitcher; factors that go much further than just earned run average, WHIP and strikeouts. A large part of success relates to the defense behind you, 50-50 strike/ball calls, and in reality, luck. For example, a pitcher giving up a HR, single, then walk is much better than vice versa. Innings pitched is another key barometer to being an "ace", but a huge part of how many innings a guy throws directly relates to the health of the pitcher. Justin Masterson had easily the worst season of his career in 2014, as he was plagued by knee and shoulder issues that resulted from discomfort in his rib cage. Masterson promised his dismal 2014 campaign was purely health-related, and now says he is in great shape and is rearing to go in 2015. Who says he can't regain his all-star caliber form?

The biggest question mark of the Sox rotation is the incumbent Clay Buchholz. In my opinion, Buchholz has the stuff and talent to easily be the #1 pitcher for the Red Sox in 2015. The problem is, he can't stay healthy. A rival executive even went as far as calling him a "tin man". Having taken at least one trip to the disabled list in each of the last five seasons, Buchholz's health is key to his success- an obvious statement. Anyways, injuries can happen at any moment of a game and can make or break a pitchers season. If the starting five can stay healthy for a majority of the season, they have the talent to win quite a few games.

GROUNDBALLS & DEFENSE
Another element to projected success in my eyes for the Boston staff is their ability to induce hitters into ground balls. Among the five projected Red Sox starters, the mean of their career ground ball percentages is an astounding 51.7%, with Masterson, Porcello, and Kelly all having their career rates above 52%. Over half of the balls hit in play against these five pitchers are on the ground, which is a huge element for success. If you are keeping the ball in the infield over half of the time, you are doing something right as a pitcher.

A point that I touched on earlier was the fact that a lot of pitching success relies on great defense. Having gold-glove caliber defensive players behind you as a pitcher is an extreme advantage. Since the Red Sox staff likes to force hitters into ground balls, the Boston infield defense is extremely important to their success. An infield of Mike Napoli, Dustin Pedroia, Xander Bogaerts, and Pablo Sandoval should prove beneficial to the ace-less Red Sox starting rotation. Lets look at each of the 4 Sox infielders and their UZR/150 rating, which is defined as the number of runs above or below average a fielder is, per 150 defensive games, along with their rank at their respective positions:

The average UZR/150 between these four infielders is 6.9, with a large disparity in the middle infield with Pedroia and Bogaerts. The young Aruban shortstop struggled a bit last season defensively as he split time between short and third base, but is still regarded as a slick defender and should absolutely see an improvement in his defensive ratings this season. According to Fangraphs.com, the Red Sox finished third in UZR/150 ratings last season. For perspective, Rick Porcello's former team, the Detroit Tigers, finished 28th, and Justin Masterson's former team, the Cleveland Indians, finished 29th. It is safe to say that these two pitchers will enjoy having one of the best defenses in baseball behind them over the course of 162 games.

With the small dimensions of historic Fenway Park, (310 feet to the Monster and 308 feet to Pesky's Pole), it is imperative for the Boston rotation to keep the ball on the ground and not in the air. Hanley Ramirez is playing his first full season in the outfield, and playing the ball off the Green Monster can take some time getting used too. Mookie Betts has yet to play a full MLB season, and Shane Victorino isn't getting any younger. Since history tends to repeat itself, it is safe to say that with the career ground ball rates of each pitcher, combined with the excellent infield defense of the Red Sox, the Sox rotation should see increased success in the 2015 campaign if they can keep doing what they do best- inducing ground balls.

CLOSING STATEMENTS
Do the Red Sox even want Cole Hamels? Is he really worth giving up a top prospect like Blake Swihart or Mookie Betts? My answer is no. Hamels is an all-star pitcher, but look at his success versus the American League in his career. He is 8-13 with a 4.54 ERA during interleague play over the course of his 9-year career. Against the other four teams in the AL East, Hamels is an astounding 0-6 with a 5.05 ERA in 10 starts. You don't have to be a genius to realize that isn't very good. He is 31 years old and tends to be somewhat injury prone. If I am Ben Cherington, I am holding on to my prized prospects and rolling the dice with the five misfit toys that is Kelly, Buchholz, Porcello, Miley and Masterson.

Who's to say Rick Porcello won't break out this year and become the Red Sox ace? The talent is there. You never know who will break out each season. Who would've predicted the Kansas City Royals to come within one game of winning the World Series last year? Who would've thought everything would come together for the 2013 Red Sox en route to their World Series win? In the NFL, the touchdown pass leaders are almost always the same every year. LeBron James and Kevin Durant lead the NBA in scoring every year. Baseball, on the other hand, is unpredictable. There are hundreds of things that can go wrong and hundreds of things that can go right from March to October. This pitching staff has proven they have the stuff to succeed. It is just a matter of them breaking out.

In the end, the Red Sox need to put on their poker face and play the hand they were dealt. They might be surprised with the results.

Which Red Sox starter will have the most success in 2015?