The Red Sox have gained plenty of information on their young arms these last few months. Unfortunately, little of it is positive.

Share All sharing options for: Red Sox finding no answers in rotation

The one positive of being out of the playoff race early on is the ample setup time it provides for the year to come. With months of 2014 relegated to meaningless losses, the Red Sox could afford to play around with their roster and rotation to see which players could be expected to help in 2015, and what holes need to be filled in free agency.

For the Red Sox, the rotation had to be the real focus here. The major league starting five had been emptied out by mid-season trades, making room for Boston's huge collection of upper-level pitching prospects. Sure enough, the Sox have had plenty of time to see the likes of Brandon Workman, Rubby De La Rosa, Allen Webster, and Anthony Ranaudo. The quartet of young arms has combined for some 228 innings of work, giving the team plenty of information to go on.

The problem? Most of that information is the sort you'd rather forget. Of the four, Rubby De La Rosa has been the most successful with a 4.01 ERA. With a 6.26 K/9, 3.23 BB/9, and 0.98 HR/9, his peripherals are, likewise, the best in the bunch. The problem being that none of that is particularly positive. The ERA is slightly below league average. The K-rate is on the low side, the walk-rate on the high side. All-told, De La Rosa's mediocrity only stands out because everyone else involved are varying degrees of awful.

It's not exactly a shock when young players struggle, granted. None of these four can be stamped as finished, failed projects, and it's not hard to imagine the steps forward most of them could take to be pitchers who could help the 2015 Red Sox win. If only Allen Webster could throw a strike! 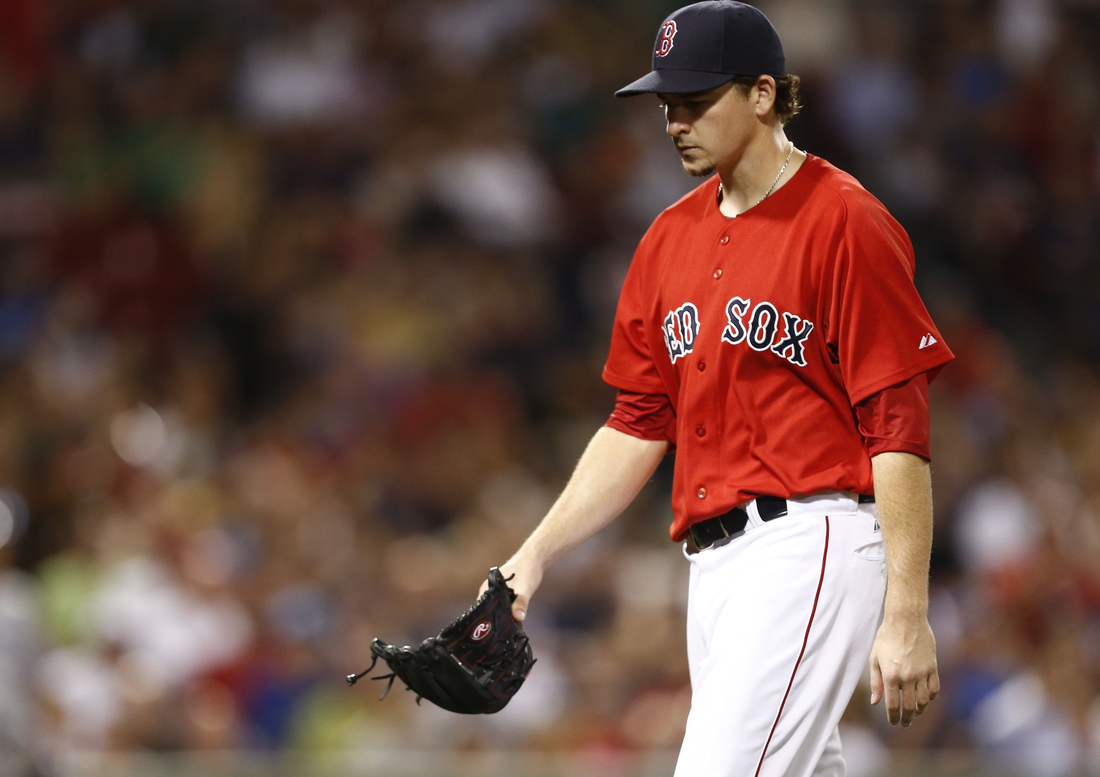 The problem is that the time for cuts is coming. The Red Sox can only afford to keep throwing the same guys at the same problem for so long before moving on, and with Matt Barnes, Henry Owens, Edwin Escobar, Brian Johnson, and Eduardo Rodriguez all demanding opportunities in the near future, it's going to be hard to justify leaving guys like Allen Webster and Brandon Workman at the top of the list in the near future.

For some, there is more reason to doubt than others. Workman, for instance, was never supposed to be an impressive starter. His repertoire is limited, and while his changeup has perhaps played up more than it was expected to, it's not been enough to mask his reliance on an underwhelming fastball. At 26 and with 120 major league innings to his name, he also lacks the age excuse Webster (24 years old) can rely on and the experinece excuse that Ranaudo (23 innings) can use. His early returns in 2013 were exciting, but really just come down to three good starts that he's more or less been riding ever since.

By virtue of viability, Rubby De La Rosa is probably safe from anything short of a trade. He will still be in the rotation plans in 2015, whether as a fifth starter or a sixth, just because he's shown the ability to be decent. It would also be pretty rash of the Red Sox to pass such quick judgement on Anthony Ranaudo unless his September is a real disaster.

But Workman and Webster might be different stories. Maybe that means a move to the bullpen, or a trade away from the organization. In the case of Allen Webster, whose problems are likely to shine through no matter the level of competition, perhaps even a trip to Double-A is in order to fix the issues that have ruined a pitcher with some really impressive stuff.

The top levels of the minor leagues are full-to-bursting with starting pitching, but it hasn't provided the Red Sox with any answers for 2015. Whether the Red Sox go all-in on marquee free agents, or go a more mid-range route, it seems very likely that these struggles will force them to pick up a pair of starting pitchers on the open market in the offseason to come. That will leave one spot in the rotation for one of the minor league arms, five spots in Pawtucket to store the backup arms, and eight players with a reasonable claim to said spots. For two of them, it's going to be time for the Red Sox to acknowledge that things aren't working out, and it's time for a change.

Editor's Note: SB Nation's partner FanDuel is hosting a one-day $18,000 Fantasy Baseball league for tonight's MLB games. It's $2 to join and first prize is $2,000. You can join in now using this link.