No reason for the Red Sox to entertain trading Dustin Pedroia

With the rise of Mookie Betts and Dustin Pedroia's offensive decline, some have decided it's smart to try to trade the veteran second baseman now. That would be a mistake.

Share All sharing options for: No reason for the Red Sox to entertain trading Dustin Pedroia

At some point in the last 10 or 20 years, the Patriots passed the Red Sox as the kings of Boston’s sports scene. With the rapid rise in popularity for the NFL and the Patriots’ run of success, it was inevitable. At times it an be annoying to hear football talk in the middle of the summer, especially when the Red Sox are in contention, but it’s the way it is and we all have to deal with it. The consequences of it, though, are quickly becoming old. The Patriot Way has become a famous philosophy around these parts, and we see more and more demands for the other franchises in the area to mimic New England’s tendencies. What it basically boils down to is that no one is bigger than the team, and anyone is vulnerable to be cut or traded at any time. Of course, football is an entirely different animal than most any other league, with their hard salary cap and lack of guaranteed contracts. Still, the comparisons happen, and one of them came last week. Tony Massarotti, writing for boston.com, opined that it’s time for the Red Sox to consider trading their franchise second baseman. While it seems like it’s a move that the Patriots would make, dealing Dustin Pedroia is not something that makes sense for the local baseball team.

The premise behind the argument for trading the 31-year-old is fairly straight-forward. It mostly comes down to his offensive numbers, which have been dropping do to a sharp decline in his power over the last few seasons. On top of that, he is on the wrong side of thirty, and the Red Sox have a stud prospect in Mookie Betts who is a second baseman by trade, and could step right in and take Pedroia’s spot in the lineup. As Massarotti points out, being able to move Betts to the keystone would clear things up in a very blurry outfield picture as well. 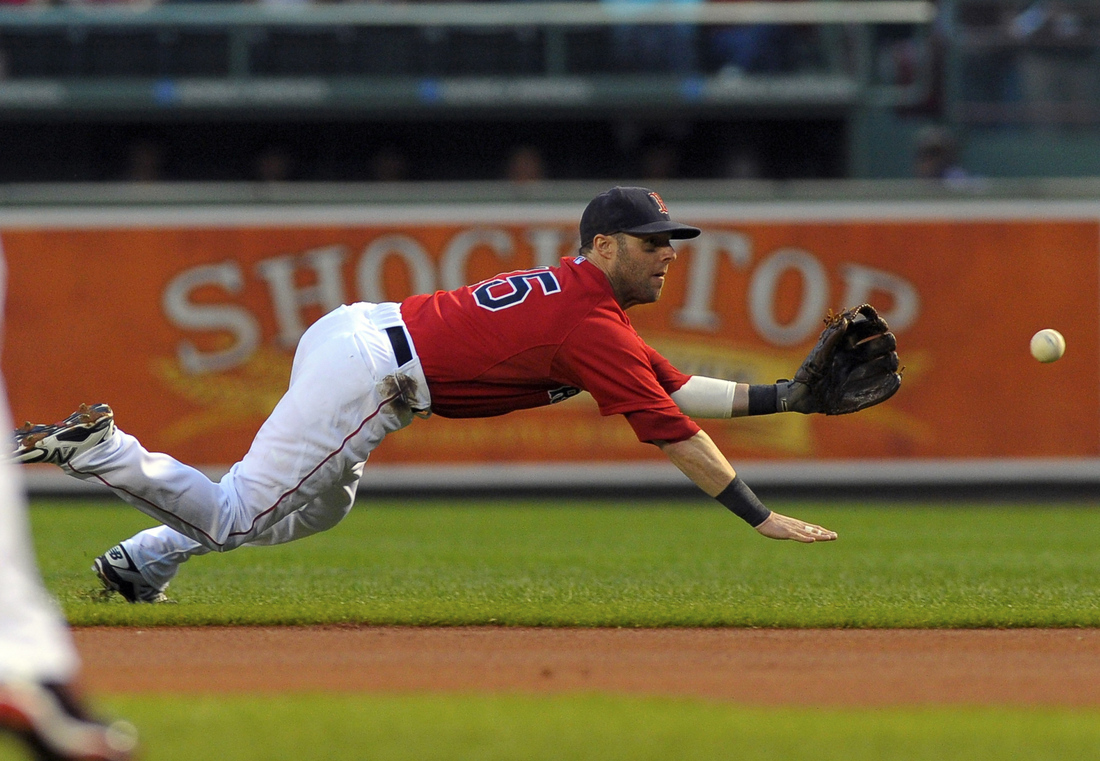 I’ll tackle these points one by one, starting with the concerns over Pedroia’s power. There’s no doubt it’s a real concern, and there’s really no realistic way to look at it as anything but that. I’ve written about it in the past, as have countless other writers. Whether it’s for injuries, general decline or something else, it’s something that looks permanent and needs to be factored in when projecting his future production. With that being said, it hardly makes Pedroia a liability, as he remains a very valuable player. The drop off in power merely makes him a very good player rather than a bona fide star. He consistently hits for a high average by limiting his strikeouts and converting balls in play into singles, and his on-base percentage remains above-average. Since the start of 2012, he is still hitting .291/.354/.415, good for a 111 OPS+. It’s not an elite bat, but it’s still a productive one. When you add his stellar defense at a premium position, which only seems to be getting better, you have a possible All-Star every year. His age indicates that he will continue a decline, but he’s showing no signs of falling off a cliff, and he has a long way to fall before becoming unplayable.

Massarotti’s argument becomes intriguing when Betts comes into play, given how well he’s played since being called up to the majors. He’s shot through Boston’s farm system in the last few years, and has flashed the talent that could potentially make him a star one day. It makes sense to try to find a spot for him on the roster. However, there are other ways to make it happen. They could very well start next year with an outfield of Yoenis Cespedes, Rusney Castillo and Betts. They could also try the rookie out on the left side of the infield, solving two issues with one move. There is also the possibility of trading him. He’d be a tough guy to watch go, but he’d bring back a valuable piece, and there’s no guarantee of consistent production from him. We all like to imagine a prospect’s best-case scenario as the most likely, but that rarely comes to fruition. In reality, if Betts becomes a player of Pedroia’s current quality - roughly a four-win player - that would be great. There’s a pretty good chance he never even reaches those heights.

There’s also the importance of Pedroia’s role in the clubhouse and away from the team, something that Massarotti didn’t really touch on. While the rise of sabermetrics and new-school thinking has rightfully diminished the role clubhouse personalities play on winning teams, it doesn’t make the concept completely meaningless. There is something to be said about continuity in the locker room, and a strong group of leaders. Pedroia definitely belongs in that class, as he is constantly talked up as a captain-like personality. He is a presence that helps young player adjust to life in the majors, and keeps veterans loose in the daily grind of the major-league season. On top of that, he helps ownership’s bottom line. I know it’s annoying to hear about the rich owners needing to make more money, but that’s a reality. Pedroia is the definition of a fan-favorite, and trading him would likely result in a fair amount of backlash from the fan base.

I’m as excited as anyone for the Patriots’ first game this weekend, and they are clearly a terrific organization who can teach a lot of lessons. That doesn’t mean everything they do needs to be copied by the other teams in the city, though. It’s entirely possible that if Robert Kraft and Bill Belichick were running things for the Red Sox, Pedroia would have already been shipped out of town by now, but that doesn’t make it right. He is a player who still provides consistent production, even if it’s less than what he provided in the past. He is a strong clubhouse presence and an important part of the community. Ben Cherington will surely be a busy man this offseason with a lot of potential moves to make. Trading Dustin Pedroia should absolutely not be one of them.