He struggled at the start and it obscured things, but Hassan's 2014 was a huge step forward.

You probably didn't pay much attention to Alex Hassan this summer. Don't worry, it wasn't obvious that you should be paying attention to him, as he's always been something of an under-the-radar, wake-me-when-he-breaks-out kind of prospect in the Red Sox system. When he struggled during the season's first few months with Pawtucket, it was easy to forget about him. When he jumped to the majors briefly while the Red Sox struggled with injuries, and was sent back down shortly after, it was merely a blip in a season full of much larger problems, disappointments, and rookies. When he didn't get the call to the majors when rosters expanded in September, it was easy to assume it was because he's "just" Alex Hassan, not because the hit by pitch he took in the Triple-A playoffs might have been a problem.

While we were all forgetting about Hassan, though, his season changed. Last August, we wrote about the transformation of Hassan into a player that might mean something in Boston's future. After he was sent back down to the minors, that transformation continued, giving hope to the idea that Hassan is the kind of late bloomer his career has suggested he could be.

From April 3 through May 28, Hassan hit just .217/.318/.303. He wasn't unlucky, either, as he had a .323 batting average on balls in play, but something was off in his swing and he was striking out over 30 percent of the time: in his 50 games at Triple-A in 2013, Hassan whiffed in just 22 percent of his plate appearances. He showed little power during this stretch, with one homer, 10 doubles, and an Isolated Power of just .086: it was a small sample, yes, but the strikeouts in conjunction with the power outage did not auger well for a 26-year-old in what was expected to be his second full season at Triple-A, and fourth appearance overall at the level. 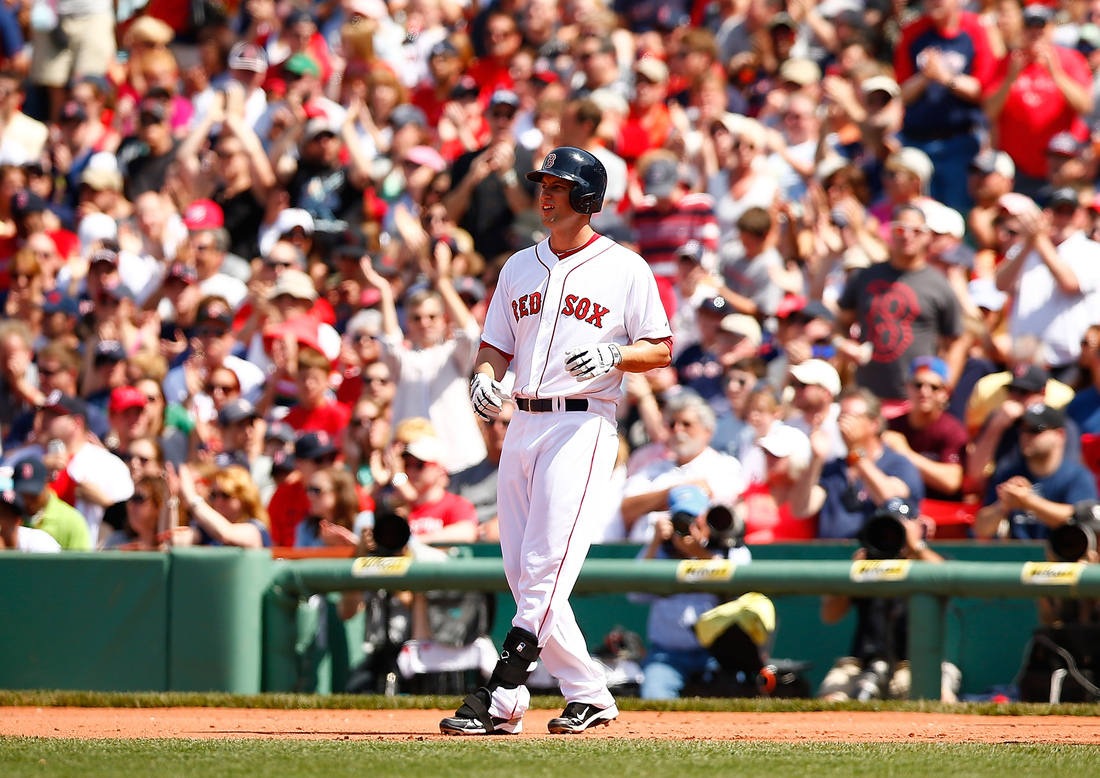 From that point forward, though, Hassan returned to form, matching his previous promising work at Triple-A. He batted .327/.411/.521 with seven homers and 27 extra-base hits overall in his next 59 games, and struck out just 49 times in that stretch, for a much more normal rate of 19 percent. His BABIP also skyrocketed to .390, but even if you shave that down to normal levels for Triple-A, Hassan still looks like a quality hitter who can hit for some power and get on base. He had another brief promotion to the majors interrupt his minor-league season, but, all told from the first promotion forward, he batted .327/.411/.498 over his final 70 games.

This all stems from the changes he made in his swing before 2013. Hassan had always had an issue getting his lower half involved in his swing, and it limited his power production. As was detailed just over a year ago by Sox Prospects' Ian Cundall, though, he switched from a toe tap to a leg lift that better prepared him for using his whole body in a swing to drive the pitch.

This small change has had a two-fold impact, as it has improved his timing at the plate and allowed him to get more leverage, and thus hit for more power. Hassan is much quicker to the ball and has shown the ability to drive the ball with backspin to all fields. To illustrate the second part of that point, Hassan has 20 extra-base hits on the season in 183 at-bats over two levels. Last season in 312 at -bats, he also had 20 extra-base hits.

While he might have had some trouble early in 2014, this plan continued to pay off, and Hassan remains an intriguing contributor who can help in the outfield, at first base, and as a designated hitter. Well, in theory, anyway.

Hassan will be 27 next year, and there is no obvious spot for him on the Red Sox roster thanks to the plethora of outfielders combined with both David Ortiz and the final year of Mike Napoli's contract. There doesn't have to be room just yet, though, as Hassan still has one option remaining -- that can get him through a crowded 2015 and leave him in position to contribute in the majors in 2016, when some of the outfielders have cleared out and Napoli is possibly elsewhere. It's likely this is more time than Hassan needs in the minors, but that's just how the roster has shaken out: if there are injuries, there might just be room for him in 2015 anyway, and he's already on the 40-man roster, too.

On a weird Sunday, two rookies chipped in to help the Red Sox win.

Now, Hassan might not be a starting first baseman or left fielder in the majors, as he still has to prove he can hit major-league pitching as well as he's managed against their Triple-A brethren. He could still turn out to be the kind of player the Red Sox hoped he would be when the protected him from the Rule 5 draft before 2012, though: a disciplined batter whose patience leads to not just walks, but also plenty of hits and some power. Hassan could end up being something like Mike Carp was to the 2013 Red Sox, capable of filling in at first, DH, or a corner outfield spot when necessary, or he could maybe even be something like Daniel Nava, who took forever to get to the majors, but succeeded there on the cheap thanks to his own disciplined approach. Neither of those players are stars, but they're useful players, and when you can produce them from our own system rather than paying on free agency for them, it's even more helpful.

We probably won't get to find out Hassan's fate in 2015, but we don't need to, either. He'll likely be there when there is finally a spot, and we'll then see what he can do with a chance.