As we watch the end of Derek Jeter's career, we begin the think about life without David Ortiz. As much as the Red Sox may try, they won't be able to replace him.

Share All sharing options for: There's no replacing David Ortiz

In case you haven't heard, Derek Jeter is retiring after this weekend's series in Boston. He's gone through an entire season of farewells across the league, something many have felt the need to bash and criticize. (Those people are wrong, but that's neither here nor there.) However you feel about it, there's no denying that this is a big deal, and it's the topic around the league as the regular season winds down. With all of that talk, it has me thinking about David Ortiz. He may not be quite on the same level as Jeter, but Ortiz has been a damn important player in Red Sox history, especially for those of us in our early-to-mid 20's. It's to the point where we've kind of taken it for granted that, barring injury, he will be right in the middle of the lineup every day. Eventually, though, he's going the retire, and that time is quickly approaching.

It's a sad reality, but it's coming. In the not-too-distant future, we'll be looking at lineups without David Ortiz's name in it. Earlier this week, Scott Lauber of the Boston Herald wrote about this unfortunate reality, and looked at how the Red Sox could possibly replace the most famous designated hitter of all time. It's a question that the front office will spend a lot of time trying to figure out. I've got some bad news for them, though. It won't happen.

Ortiz is truly one of the last of his kind. The game is moving away from players like him, and while baseball is cyclic, and will likely move back towards his style of the game, it doesn't appear to be moving that way any time soon. At this point, millions of words have been written about the lack of power in the game today, so I don't need to get into the gory details of the situation. Obviously, this was the calling card of Ortiz's game. He was a great all-around hitter, of course, but in twenty years we'll remember his home runs, and the epic pimp-jobs that often followed. Whoever comes in fill his shoes at DH will not be the same kind of thrilling power hitter he has.

Could the Red Sox pursue shortstops this winter?

Sox should leave offseason plans to Middlebrooks Could the Red Sox pursue shortstops this winter?

That brings us to our next point: the DH position is changing rapidly before our eyes. No longer is it a position for lumbering sluggers who can't physically play the field. Instead, teams are using it as a position of flexibility, swapping guys in and out based on daily needs. Sure, guys like Ortiz, Victor Martinez and Adam Dunn still exist, but they are quickly becoming the minority. The Red Sox are an innovative team, and not one afraid of embracing an evolving game, so there's no reason to believe they'll buck this trend.

Ortiz wasn't just a great hitter, though. He was also unbelievably consistent. In his 12 years in Boston, Ortiz had exactly one (1) down season. In 2009, a year which many - myself included - assumed would be the beginning of the end for Big Papi, he hit a paltry .238/.332/.462. As bad as it sounds, though, that was still good enough for a 102 OPS+. In fact, over his entire career, 1999 was the only season in which he finished with an OPS+ below 100, and he had all of 25 plate appearances that year. Ortiz's year-to-year performance has been extremely rare in baseball history. In his career, he's had eight seasons with at least 30 home runs, an OPS+ of at least 135, and an Isolated Power of at least .200. Only ten players in the last fifty years have had more such seasons. This is made even more amazing by the fact that he didn't have his first such season until he was 27, and he missed meeting these numbers by one home run in 2011.

Still, though, the Red Sox are going to have to find a way to fill that void. On the top of everyone's list is the man in Miami, He Who Shall Not Be Named. Let's not get too deep into that scenario though, since the chances of actually getting him are a lot lower than some would have you believe. In-house, there are a couple of power bats who could stick around long enough to take over the role. Mike Napoli's hip issues may force him off the diamond at some point, and he could be an attractive designated hitter. Yoenis Cespedes probably won't be moved to DH, but he has the power to stick in the middle of the lineup. However, while both of them are damn fine hitters, holding them to Ortiz's standards would be blatantly unfair. 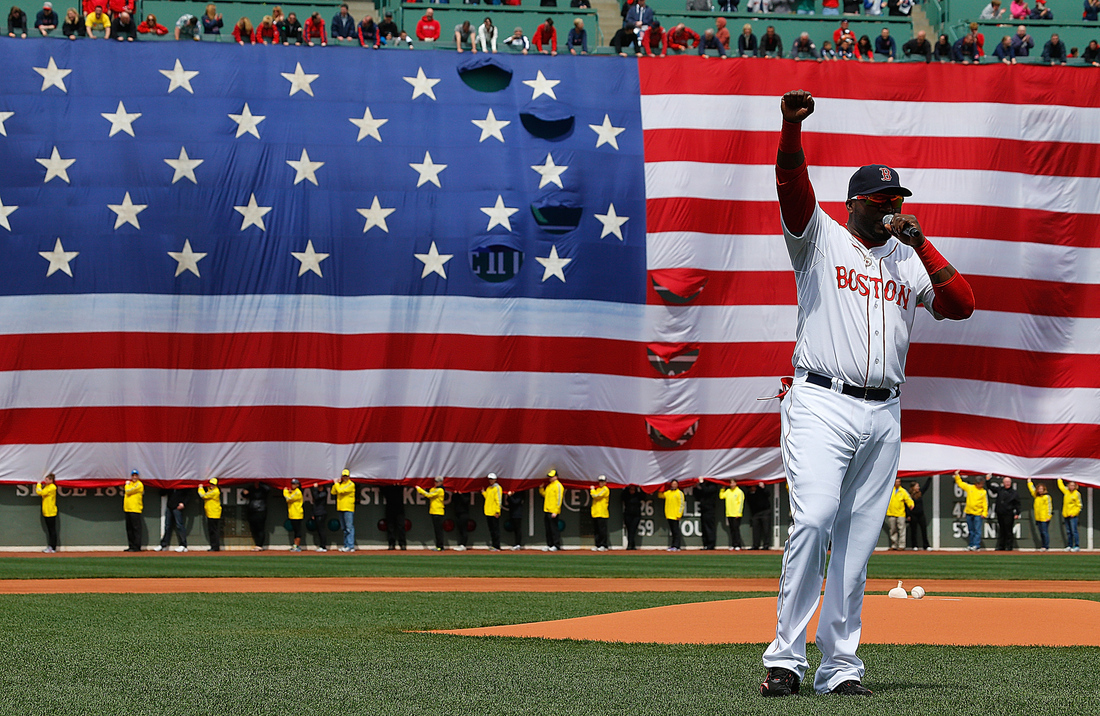 All of this does not even take into consideration every thing else David Ortiz meant to the Red Sox. The last 10-15 years have seen an unprecedented run of success. Many players have come and gone during this time, including players that were better than Ortiz. To this day, Manny Ramirez is still the best hitter I've ever seen wearing a Red Sox uniform. However, the big DH has been the one constant throughout all of this success. He's also had seemingly every big hit, from the walkoff in Game Four of the 2004 ALCS to the elimination-avoiding grand slam in last year's ALCS. He's been involved in some off the field moments, too. Most notable would be his "This is our f*cking city" speech after the marathon bombings last spring. In many ways, he is similar to Jeter. Both players had superior teammates throughout their tenure, but both embodied the team and came through in every big spot.

As we say goodbye to Derek Jeter, the harsh reality of Ortiz's mortality in the game becomes increasingly clear. It's hard to come to grips with, but we only have a maximum of a few more years left of watching him crush baseballs. Eventually, he'll be gone, and the Red Sox will give it their all to fill the void he leaves. If their smart, they'll come to the realization soon that it can't be done. Sure, there will be other stars in the lineup, and other players will come through in huge spots, but no one will be Big Papi again. He broke the curse, and then added on two more for good measure. He ruled this city along side Tom Brady for a decade. As hard as they may try, the Red Sox aren't filling David Ortiz's massive shoes.