These Red Sox are likely losing their roster spot soon

The season is coming to a close this weekend, and that might be it for quite a few players on Boston's 40-man roster.

Share All sharing options for: These Red Sox are likely losing their roster spot soon

As September comes to a close, it's worth remembering that not everyone on the Red Sox expanded roster will be part of the team next spring. Between the influx of new talent like Rusney Castillo, Yoenis Cespedes, Allen Craig, and the rest of the trade deadline returns, as well as the development of players like Mookie Betts, Boston's 2015 plans look significantly different personnel wise than they did at the start of the season. Throw in that some players failed to perform in what was, or was getting close to, their make-or-break season, and that younger, better prospects are lining up behind them for their roster spots, and you can see a shakeup coming.

Departing free agents can help with some of this roster crunch -- Burke Badenhop, David Ross, and Koji Uehara are all free agents, and the Red Sox might not re-sign them or replace them externally -- but Boston is likely going to need more than three open spots to finish transforming this team into a contender. They can get a fourth by declining Craig Breslow's 2014 option, but they could all theoretically be filled up by protecting Blake Swihart, Eduardo Rodriguez, Sean Coyle, and maybe Travis Shaw from the Rule 5 draft in November.

Why the Sox adding seats to Fenway is great news

With that in mind, there are plenty of players the Sox can choose to part ways with to open up space for new blood, whether it be through trade, removal from the 40-man and exposure to waivers, or outright release. They don't have to excise all of them from the roster, but depending on how many spots they want and what directions they go in, these are the likely players to be removed.

Brentz is 25 years old, and just finished his second season at Triple-A Pawtucket. He had a better year than in 2013, increasing his walk rate to finally get his on-base percentage to a good place at the level, but .243/.341/.465 still has plenty of holes in it at his age and his known limitations. He's not a great defensive player, but his arm means right field is at least an option, and he's best suited against left-handed pitching. There can be space for a player like that on a major-league roster, but probably not the 2015 Red Sox, given how crowded their outfield picture is without even bringing the Pawtucket outfielders into the discussion. 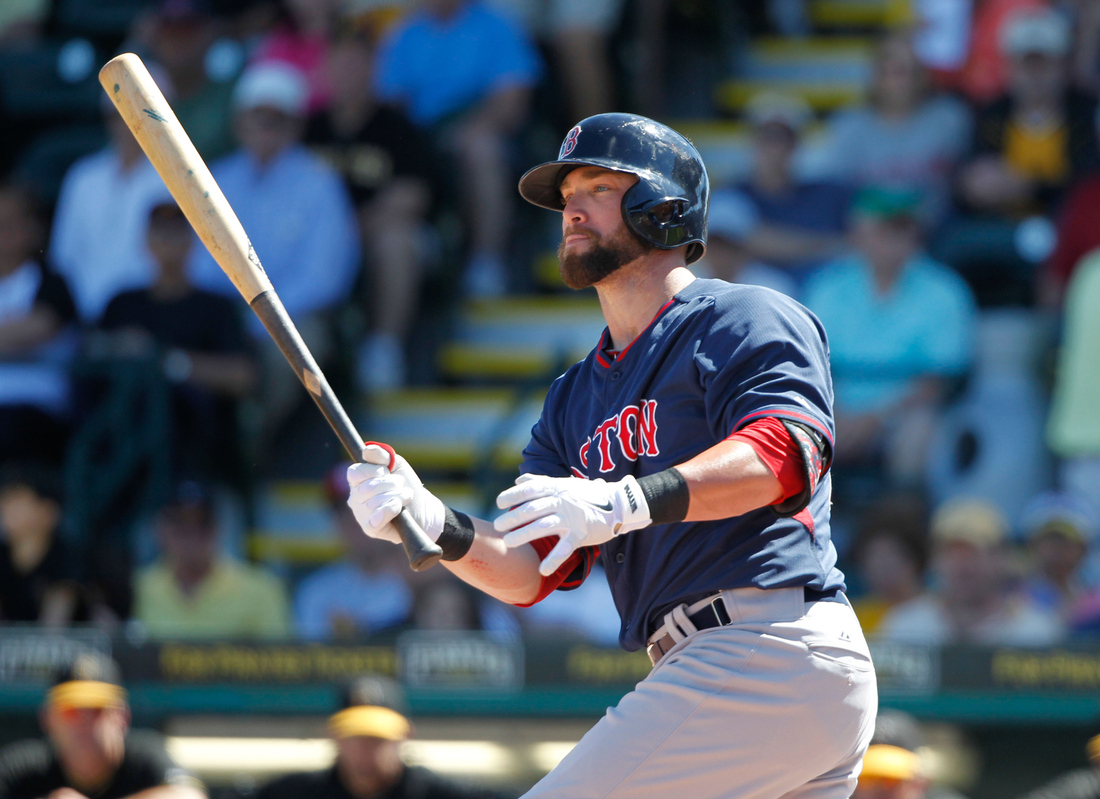 Now, Brentz first on this list does not mean he's the most likely to go: he could still grow up to be a lefty masher in the majors, and a low-cost one at that, and that has some value. He can also serve as some depth, and given he does have power, even if it's in a platoon role, the Sox aren't likely to just cast him aside. It's for those reasons he might end up in another uniform by next spring, however, as Brentz might appeal to another team who is desperate for power or at least some pop against lefties. He's not enough to anchor a major trade by himself, not even close, but he could be part of something larger, or in a swap for another minor part the Sox lack.

Wilson was solid in his 26 big-league innings this year, but it's hard to rely too much on someone who showed uncharacteristic control and struck out just 5.5 per nine over a small sample -- especially when that pitcher has a history of missing both bats and the plate. In fact, that's what he spent his time at Triple-A doing in 2014, striking out almost nine per nine while walking more than half of that for 41 frames.

In 2011, Lavarnway hit 18 homers for Pawtucket in 61 games after a midseason promotion: in the ensuing 195 games at Triple-A, he's collected just 14.

This is the third year that Wilson has been a full-time reliever, with the transition coming shortly into his 2012 campaign, and he is now 27 with one option left and little to tell the Red Sox he's a capable big-league bullpen piece. They could easily stick him in Pawtucket once more to see if he's turned a corner with his control by sacrificing whiffs, but he also hasn't performed so well that he's a lock to be scooped up by another team were he to be designated for assignment, either. If he's plucked from waivers, so be it: the Red Sox are loaded with arms who could turn into useful relievers, and Wilson is far down that particular list at present.

Similarly, Drake Britton has maybe run out of time on the 40-man. It's not that he's hopeless, but he's coming off of an awful 2014 in which he walked more batters than he struck out at Triple-A, so using a 40-man spot on him might not be all that appealing to anyone else, either: maybe the Sox can sneak Britton through waivers by designating him now, giving them another chance to look at him when he's 26 and not taking up a precious roster spot.

Britton's control was assumed to be a problem before 2014 happened, but he is capable of missing bats and inducing grounders, especially against his fellow lefties. It's unlikely he'll be a viable trade piece after his disaster year, so if the Red Sox start running out of roster space, we might see him designated with the intention of holding on to him.

Lavarnway has hit .204/.253/.321 in the majors over 296 plate appearances and parts of four seasons. In 2011, he hit 18 homers for Pawtucket in 61 games after a midseason promotion: in the ensuing 195 games at Triple-A, he's collected just 14, and batted .280/.372/.396. It's not bad thanks to that on-base percentage, but you have to remember that it's not going to translate perfectly to the majors, either, and also that his most recent success in the minors came as a 26-year-old playing primarily first base and designated hitter. 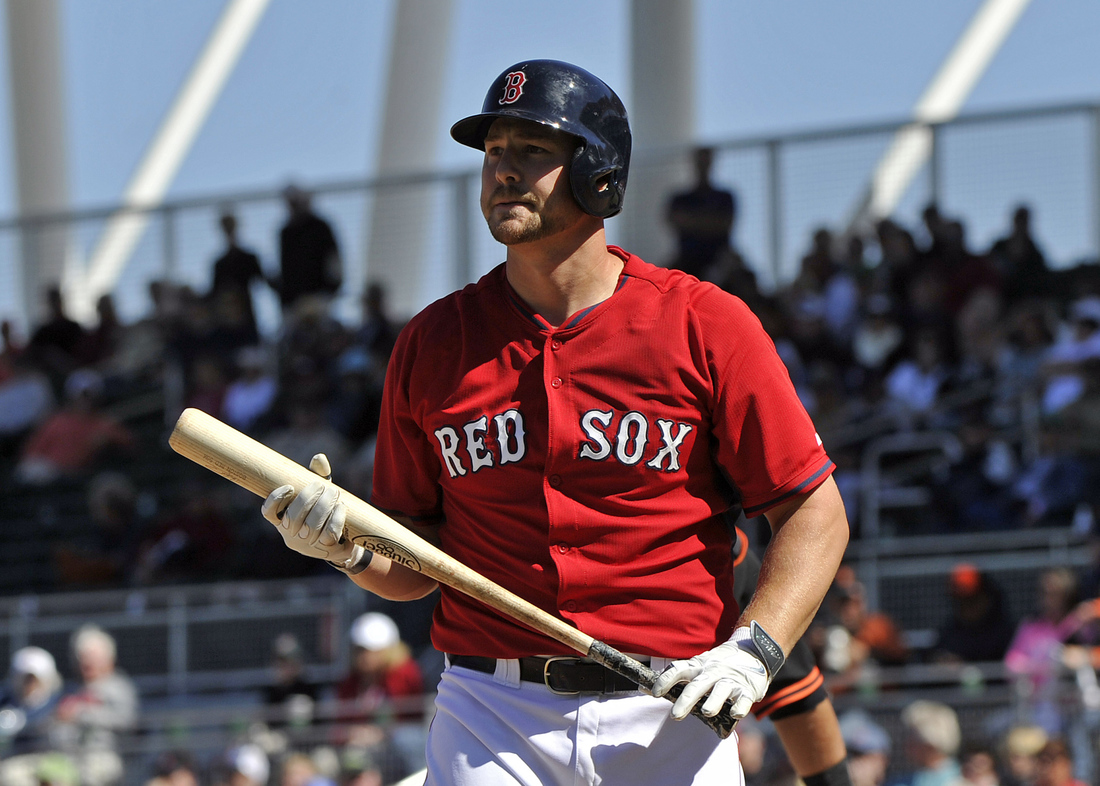 The dream of Lavarnway as a starting catcher is dead, and while he can probably provide solid offense for a backup in that role, the defense just isn't there, and he's not going to be much help at other positions offensively. Lavarnway is also out of options, so the Red Sox can't just stash him at Triple-A again in the hopes that he figures out a way to deal with his lack of bat speed, a problem that big-league pitchers are all too ready and able to exploit. Chances are very good that Lavarnway is with another organization after this winter, and possibly even before rosters need to be set for Rule 5 draft purposes.

Layne had a good season for Pawtucket, striking out almost 10 batters per nine in 48 innings while posting a 1.50 ERA, but he hasn't had the same swing-and-miss in the majors, either in 2013 or this year. His career major-league numbers still look good thanks to a wonderful start to things with San Diego in 2012, but since, he's been underwhelming, posting a 1.5 strikeout-to-walk ratio that suggests trouble will eventually come.

Time to root for the Sox to lose

The season is almost at its end, so you can cast aside any guilt you had about rooting for Boston to lose in order to bolster their draft position.

Why are the Red Sox bothering with Middlebrooks?

The Red Sox seem to want to keep Will Middlebrooks around for another season. Is there good reason to keep the struggling third baseman on board?

Time to root for the Sox to lose Why are the Red Sox bothering with Middlebrooks?

Layne does have options remaining, so the Sox can stash him at Pawtucket where he'll be a 30-year-old reliever where his next inning will be his 258th at the level. He's not necessarily bad, but he's a somewhat fungible piece, especially if what works in the minors isn't going to cut it in the majors. For that reason, it's easy to conceive of a situation where the Sox don't necessarily dislike Layne, but don't have the space for him on the roster while preparing for 2015. His future in Boston is likely tied to Drake Britton: the Sox probably won't bail on both, but fitting both onto one roster seems like a bit much in the stashing minor assets department.

Rivero will be 27 in 2015, and is a journeyman. He's spent time in the Indians, Phillies, and Nationals organizations prior to joining up with the Red Sox in 2014, and doesn't have much quality minor-league experience to speak of. He's probably one of the early pieces to be removed from the 40, especially since the Red Sox also have Jemile Weeks around these days to play utility journeyman.

Herrera was brought to the Red Sox last winter in order to guarantee there would be someone in the organization who could play shortstop besides Stephen Drew. He's not much for offense, and now that the Sox have Weeks, a rejuvenated Brock Holt in an emergency, Deven Marrero at Triple-A, and even Mookie Betts if that emergency escalates, there's far less reason for him to be taking up a spot on the 40. Herrera would likely be claimed on waivers for the same reasons the Red Sox picked him up a year ago, but given the more important things an open 40-man spot could be used for, that's perfectly fine.