What's next for Mookie Betts?

Since his third promotion the big league, Mookie Betts has found success at the plate. Given the surplus of outfielders on the Red Sox roster, Betts' future with the organization remains murky.

Share All sharing options for: What's next for Mookie Betts?

When the Red Sox decided to go out and sign Cuban outfielder Rusney Castillo, the ripple effects were much greater than the impact on the lineup. Following the team's trade deadline acquisitions, the Red Sox now have a collection of players that could fill two at least starting outfields at the major league with Yoenis Cespedes, Allen Craig, Castillo, Jackie Bradley, Shane Victorino, Daniel Nava, Brock Holt and Mookie Betts.

Betts' situation is among the team's most interesting storylines for the remainder of the season. Given the recent success of Betts and the overcrowded outfield situation, where the 21-year-old fits in the team's plan moving forward is a predicament that is still very much up in the air.

Betts clearly has the talent and potential to be a very good major league baseball player. His recent success at the plate -- highlighted by his first career grand slam -- only further emphasizes that point. In his short stint in the majors, Betts has displayed the lightning-quick bat speed, athleticism and gap-to-gap power that lead his meteoric rise up top prospect charts. At the same time, the Nashville native has been learning the intricacies of playing the outfield at the major league level.

There are still questions about Betts, most notably which position he is going to play at the major league level. The potential, however, is still incredibly high with Betts. This point is only further highlighted by comments made by Ben Badler of Baseball America on The Adam Jones Show on 98.5 The Sports Hub.

"I remember when Castillo had this open showcase at the University of Miami last month that the Red Sox had the heaviest presence there and I could see a fit. Then they traded for Cespedes, traded for Craig and Victorino is coming back and Mookie Betts is coming up and I think he has a higher ceiling that Rusney Castillo."

Badler further explained his comments on Twitter to Brian MacPherson of the Providence Journal: 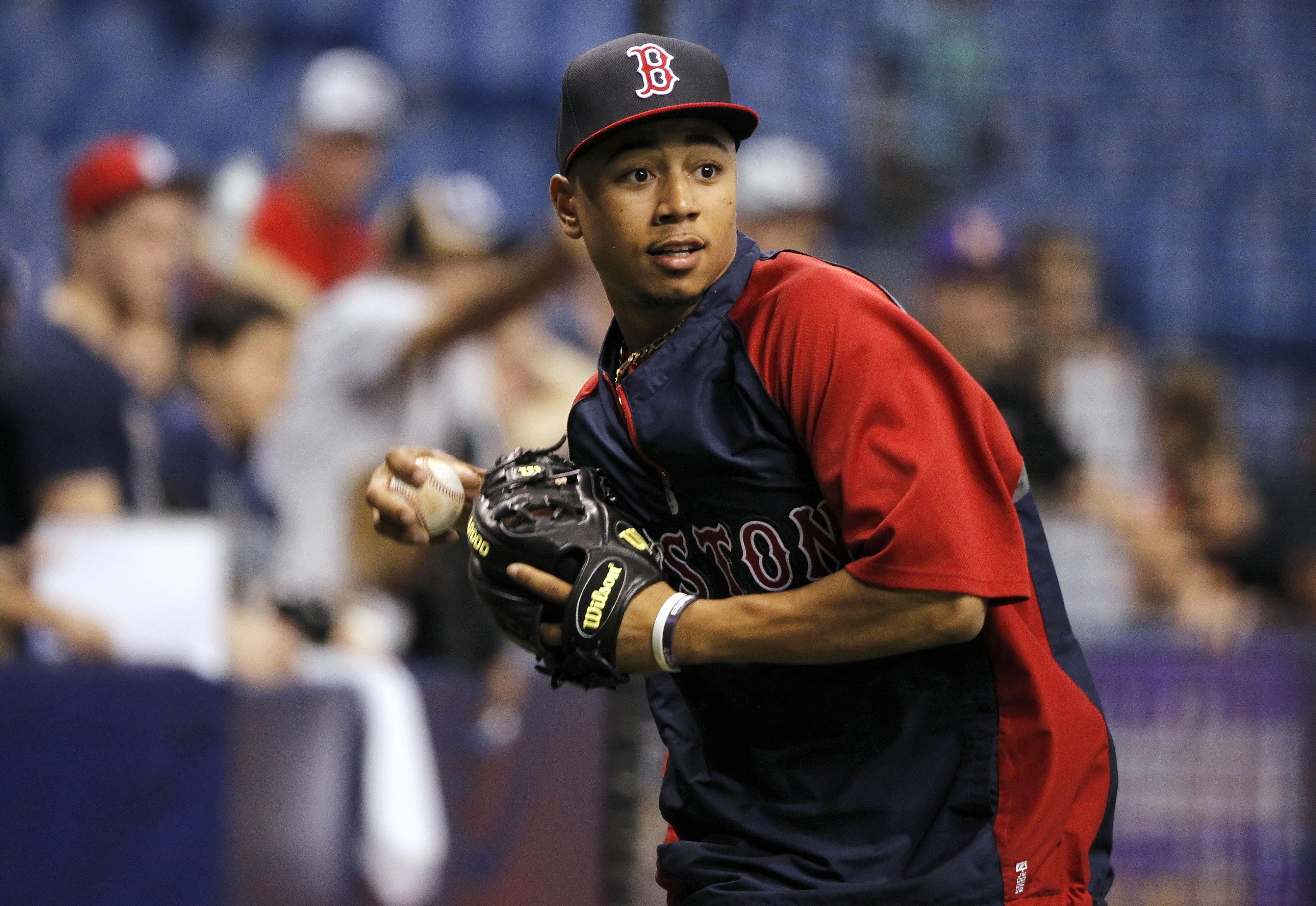 "You think about it, but then you can't worry about those things," Betts told reporters in Tampa Bay. "You have to focus on the task at hand, and that's the game today. Now I'm playing center field. Tomorrow it might be somewhere else.

"I have no idea what they're going to do. If [Castillo's] a center fielder, that's fine. Wherever they put me is where they put me."

Unless the team decides to make a drastic trade in the offseason with either Cespedes or Craig, it would appear that Betts is the odd man out in the outfield. With second base occupied by Dustin Pedroia, Betts is seemingly out of a position with the Red Sox for 2015.

Given the uncertainty of third base with the lack of stability from Will Middlebrooks and company, the position could be a place where the team begins to think about getting Betts some repetitions. There are, however, a couple of roadblocks that could prevent him from making the switch over to the hot corner. At 5-foot-9, Betts is small for third base, a position where the average player is around six feet tall. This proposition, however, has yet to have been brought up yet to Betts.

Matt Kory and Jared Carrabis of SoxSpace compare the current Red Sox season to 2012 and talk about the rookie problem and which players we still believe in.

The Red Sox fought back from a 3-1 deficit with a late RBI from Yoenis Cespedes, but the Rays triumphed in the end.

Betts' bat would not profile as the typical third baseman, but the Red Sox don't have many internal options and the free agent market is highlighted by Aramis Ramirez, Chase Headley and Pablo Sandoval.

The Red Sox' current surplus of talent suggests that a major trade package this offseason is not out of the question. Given the value of Betts as a prospect and the seemingly future occupancy of his two current positions, it would not be the least bit surprising to see him packaged in a deal that nets the Red Sox pitching or another bat. The team, however, does have a deep enough farm system to acquire a major piece without having to give up Betts.

Betts' consistent success at the Triple-A and Double-A level this season -- he is hitting .346/.431/.529 with 11 home runs, 65 RBIs, 30 doubles and 33 stolen bases between the two levels in 2014 -- suggests there is not a whole lot of polishing left to do in the minors. Right now, Betts is solely focused on finishing out the season strong to establish his value as a major league talent.

"Overall I think I am getting a little more comfortable and getting better," Betts said to reporters in Toronto. "But I still feel like I have a long way to go."