Do the Red Sox need to add to their bullpen?

We all know the starting rotation needs a facelift this winter, but does the bullpen need any additions over the offseason?

Share All sharing options for: Do the Red Sox need to add to their bullpen?

In what has been a terrible season, the Red Sox have allowed the seventh most runs in baseball. Despite having John Lackey and Jon Lester leading the rotation for most of the year, the issue has been much more with the starters than the relievers. The rotation has the fourth highest ERA of any unit in baseball, while the bullpen has one of the ten best. Clearly, given the poor performance and massive changeover, we will see many starters being targeted this offseason. However, considering how difficult it is to predict bullpen performance year-to-year, will Ben Cherington need to target any relief help?

Starting at the back, the Red Sox should be fine at closer next year. Presumably, it will all start with Koji Uehara once again. While he's a free agent at the end of the season, the fact that the front office held on to him at the trade deadline suggests they'll do every thing in their power to re-sign him in the winter. For his part, he's never expressed anything other than happiness playing in Boston. He is not a player without risks, though. While his tenure here has been mostly dominant, he's struggled mightily lately. Since August 16, he's made eight appearances and has allowed 10 runs in 6-2/3 innings, for an ugly 13.50 ERA with four home runs allowed. Given the stress he put on his arm in last year's World Series run and the fact that he's 39-years-old, it's not hard to imagine these struggles continuing next year. I would expect him to hold down the closer role to start 2015, and do well to start. He is liable to break down at any time, though, so having other options will be key.

As for the other options, the possibilities look to be in-house at the moment.The first is Junichi Tazawa, who has been tremendous over the last three seasons since become a full-time reliever. Since the start of 2012, his FIP is 20th among qualified relievers, while he carries the fifth best K/BB ratio. Should something happen to Uehara at any point next year, it should be time for Tazawa to finally get his chance at the closer role. 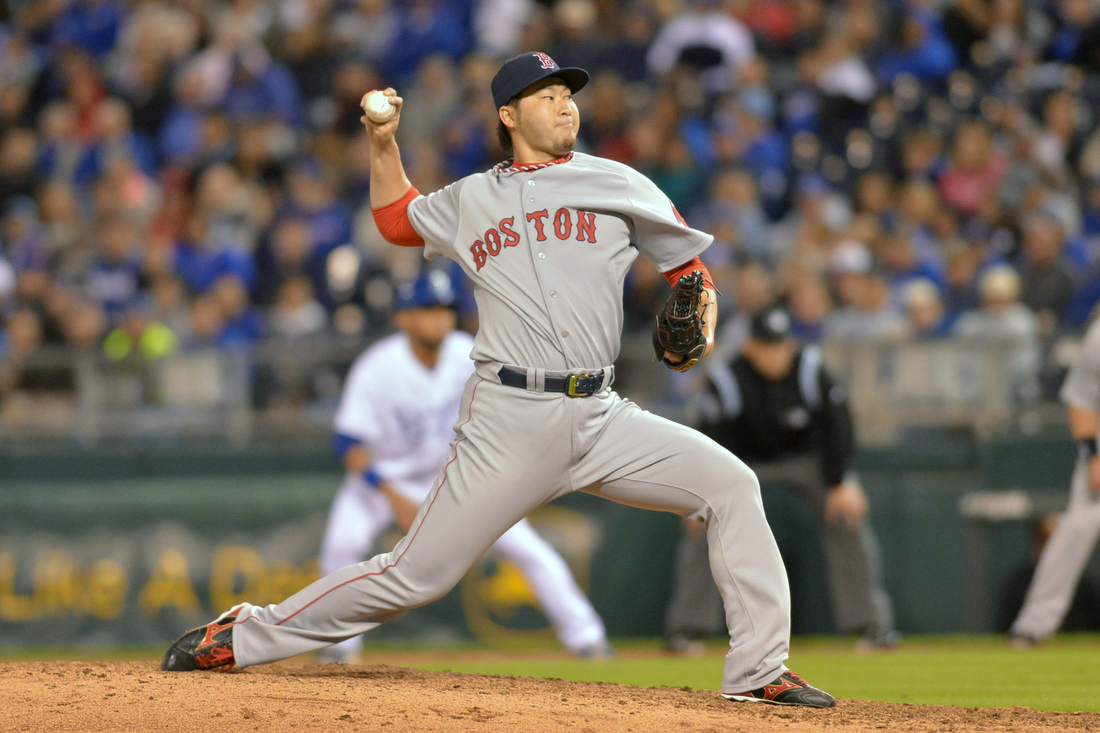 The other option would be the man who has stepped in to the closer role this season in Uehara's absence. Edward Mujica was brought in this past winter from the Cardinals, and his time with the Red Sox started horribly. In the first two months of the season, he put up a 6.41 ERA in 19-2/3 innings, while batters hit .304/.349/.532 off the righty. Since then, however, he's done a nice job of settling in here with a 2.82 ERA and a 29/8 K/BB ratio in 38-1/3 innings. With his experience in the role - he's spent some time as a closer this year and was there for most of 2013 - it wouldn't be surprised if he's actually the backup plan. Whichever order they are put in, Uehara, Tazawa and Mujica should be a fine three-headed monster in the back of the bullpen.

The rest of the depth, however, could be questionable. Burke Badenhop has been very good this year, with a 164 ERA+ and a 3.16 FIP. Unfortunately, he will be a free agent after the end of the year. Beyond him, new addition Heath Hembree could get his first full season in MLB as Boston's sixth inning man. While he's had some control issues since coming over in San Francisco in the Jake Peavy deal, his stuff should make up for any flaws he has in that area. Beyond him, one of the many starting pitching prospects that spent this year in Triple-A could move to the bullpen next year. Between Anthony Ranaudo, Allen Webster, Brandon Workman, Rubby De La Rosa and Matt Barnes, the Red Sox should have no shortages of options to fill out their bullpen. Adding one more right-handed arm to shore up the depth wouldn't be a bad idea, though, and the options are plentiful. There are big names like David Robertson hitting the market, solid setup guys like Luke Gregerson, and buy-low options like Jim Johnson.

From the left side, the team finds themselves with a major hole. After letting Andrew Miller go in a trade at the deadline, the bullpen is left with just Tommy Layne, Drake Britton and Edwin Escobar in their current bullpen. Next year, they'll need at least one better option. Miller, of course, would be the best option. He'll be back on the free market in the winter, and has expressed a willingness to come back to Boston. Unfortunately, his performance this year will likely price himself out of Boston, as the front office probably won't want to give a big contract to a setup man. As for the rest of the free agent class, it's not as pretty. The next options would probably be Joe Thatcher, Phil Coke or Scott Downs. This will be the biggest area to address in the bullpen.

The Red Sox will have a lot on their plate this offseason, and understandably, the bullpen won't be the top priority. However, they do need to make a few additions to the unit. Luckily for them, the back of Boston's bullpen should be solid, and depth is more of the issue. Adding a 7th inning right-hander plus a solid left-hander will be areas to look into this offseason, but the former is one of the easiest positions to fill in the offseason. Finding a great lefty isn't easy to do, though, and it would be nice to see them be aggressive in trying to bring Miller back.