What about the middle of the Red Sox rotation?

It's totally unclear how the 2015 rotation will look, but Joe Kelly and Clay Buchholz look to fill out the middle of the rotation. Is that a good thing?

Share All sharing options for: What about the middle of the Red Sox rotation?

I know it comes as a shock to all of us, but the Red Sox were mathematically eliminated from the playoffs after Wednesday's loss to the Orioles. While we've been looking towards 2015 for a while now, this marks the official unofficial start of next season. The winter ahead figures to be a busy one, with a lot questions to be answered. At the forefront, of course, is rebuilding the rotation.

Since the trade deadline saw Jon Lester and John Lackey leave, many words in many different forums have been written addressing this issue. When we look at a rotation, it's often divided into three sections: the front-end, the middle and the back-end. In Boston's case, the discussion has centered around the front-end and the back-end of the 2015 unit. At the front, we've been looking at who will fill the two departed pitchers' shoes. Whether it will be Lester himself or someone else, it's almost certain that the best starting pitchers on next year's roster will come from outside of the organization. As for the back-end, the assumption is that the glut of pitchers who spent this year jumping between Pawtucket and Boston will clear itself up. Between Rubby De La Rosa, Allen Webster, Anthony Ranaudo, Brandon Workman and Matt Barnes, there should be no problems finding the fifth, sixth and seventh starters. The part of the equation that's been swept under the rug a bit, though, has been the middle. Unlike the front and back, which have a wide array of possibilites, the middle of the rotation may already be figured out, with two guys currently on the roster.

Did you know that next to the word "enigma" in Webster's dictionary, this picture appears? Clay Buchholz is one of the most difficult pitchers to figure out in the league. Some days he looks like he can be a legitimate number one or number two in any rotation in the majors. Other days he looks like he should be nothing more organizational filler. In fact, this season has been great snapshot of his career as a whole. To start the year, the 30-year-old righty struggled mightily, but over the last month or so he has looked much better. In between, he found himself on the disabled list for a month. Next year, it's reasonable to expect anything within the range of what he's shown this year. He's only one year removed from being one of the best pitchers in baseball. He's less than one year removed from 6.20 ERA in 101-2/3 innings, something he did from the start of this year through August 3. Right now, he's trending more towards the good Buchholz, with a 3.22 ERA in his last six starts spanning 44-2/3 innings. Boston has always shown confidence in him, so it's safe bet he'll be in the middle of next year's rotation, which is about the only safe bet you can make in regards to Clay Buchholz.

Joe Kelly, on the other hand, has much less of a track record in Boston. Since coming here at the deadline as a piece in the Lackey deal, the 26-year-old has been a bit inconsistent for the Red Sox. The results haven't been too bad - his 3.95 ERA comes out to an almost perfectly average 99 ERA+ - but the peripherals tell a more worrisome story. While he's actually striking out batters at a better clip than he ever did with St. Louis, he's also walking opponents at a much higher rate. In fact, among qualified pitchers in the second half of this season, Kelly's 11.7 percent walk-rate is the third highest in baseball. It's not exactly that he's been extra wild since the All-Star break, as his zone profile hasn't diverged too much from his career norms. Instead, it appears his stuff may be less sharp, or more predictable. While he's typically induced swings on pitches out of the zone around thirty percent of the time, it's fallen down to 24 percent this season. Looking forward to next year, it's fair to expect that the command and control will crawl back towards his career norms. While Kelly's upside isn't as high Buchholz's, he may very well be a safer bet to be a solid member of the 2015 rotation through the entire season. 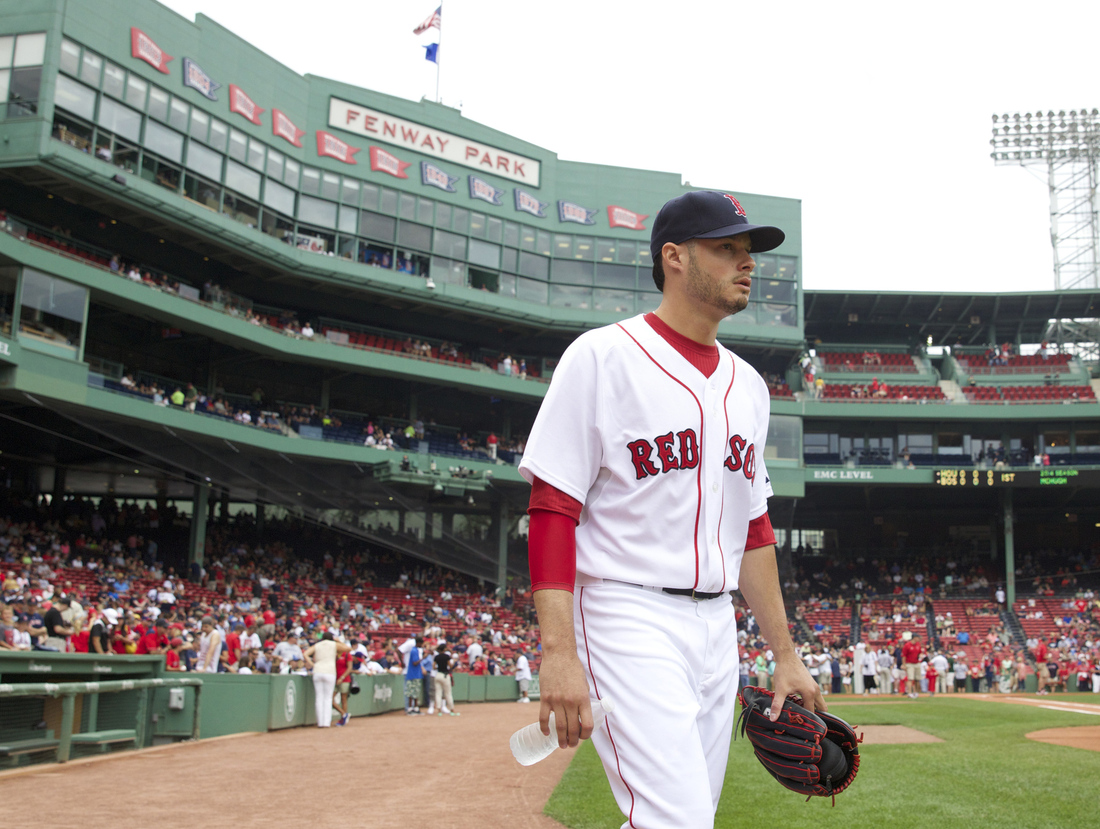 While the most likely outcome looks to be Buchholz and Kelly manning the three and four spots in next year's rotation, it's not set in stone. Maybe the Red Sox will look to capitalize on the former's strong finish to the year and trade him. Perhaps they'll view the latter as incapable of playing up to American League lineups and deal him. It's also possible that they'll only acquire one front-end starter, and bump one of them to the number two spot. In any of these scenarios, they could look to acquire a number three starter from the outside. There are a few options for this scenario in free agency and via trade. Justin Masterson has struggled mightily in 2014, and Boston could look at him as an attractive buy-low candidate on the open market. Brandon McCarthy has always posted stronger peripherals than his final ERA, but he's looked very good in a small sample since being traded to the Yankees. He's a free agent at the end of the year, and could be a nice pickup as a number four starter. Jonathan Niese has long been a favorite of mine, and could be a trade target this winter. He's never going to blow anyone away, but he consistently puts up league-average numbers, is in the prime of his career, and is on a very team-friendly contract. He's owed $16 million over the next two seasons, with two team options following that. While top-end pitching is very difficult to find, Boston's farm system should allow them to acquire a mid-rotation arm with relative ease should they lose confidence in Buchholz and/or Kelly.

With all of the talk of who will replace Lester and Lackey, and which prospect will step up to claim a spot in the back of next year's rotation, the middle has been somewhat neglected. Looking at it now, it appears Clay Buchholz and Joe Kelly have the inside track for the role. While both have concerns, they have shown the ability to produce at the major-league level. The hard part will be to fill out the rest of the rotation. After that, you just cross your fingers and hope for the good versions of Buchholz and Kelly.