Who else would we talk about in the inaugural Over the Monster mailbag?

I finally understand why non-Red Sox fans feel that the team is overexposed. I've been out of my lovely home in Brookline on a family vacation the last two days to visit some family in Dallas. Going into the trip, I was curious as to how much of the Red Sox I was going to be able to watch because homes in Texas (usually) don't have NESN and I knew that our nights were going to be pretty mellow and a lot of me sitting on the couch in the home theatre watching television. I have a Slingbox hooked up to the family TV at home, but watching anything on a projected screen is preferable.

My question was answered in the first two days. The Wednesday matchup was broadcast on ESPN while the Thursday night game was the NESN telecast simulcasted on MLB Network.

Sure, I understand that the Red Sox-Cardinals is a matchup that likely had national interest in preseason due to the 2013 World Series matchup, but the ease of seeing the Red Sox more than 1000 miles away was pretty nuts. Seeing the Red Sox so frequently on national television made me think of this tweet from Cespedes Family Barbeque:

since the beginning of 2005, nearly 13% of ESPN Sunday Night Baseball games have been Red Sox vs. Yankees

It is crazy to comprehend that a matchup of 6.5% of the teams in Major League Baseball make up 13% of ESPN's Sunday Night Baseball broadcast.

So for those who say that the Red Sox are overexposed, overrated, part of an East Coast Bias, I finally get it.

Let's get to this week's mailbag:

I'm so confused on what Farrell is doing here. The guys that need to play everyday are Betts, Bradley, Middlebrooks, and Bogaerts. Instead, you've got Holt, a very useful utility man but not an everyday player, playing everyday and you're trying to make decisions on JBJ and Middlebrooks by sitting them on the bench. You're playing Betts in 1 of 4 games, so his development is gone. All for Brock Holt?? I mean come on. What's the plan?? Where are we going here? If Betts isn't going to play everyday, that's fine, but send him back to Pawtucket. At least then you're only rotating 3 players (JBJ, Middlebrooks, Holt) between 2 positions.

What do you think Farrell should do? Has his management of the kids this season been as bad to you as it has to me? 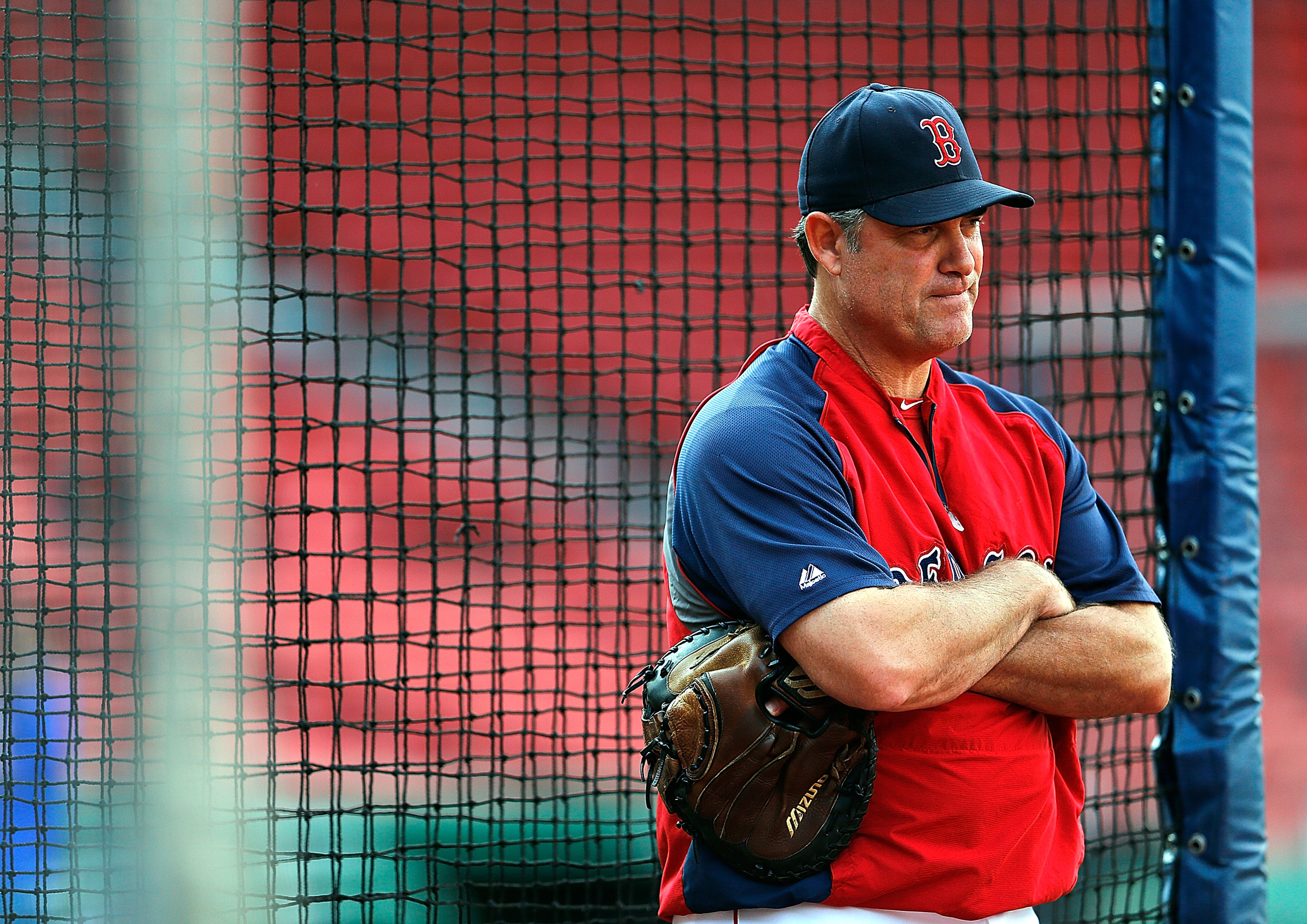 The day after the trade deadline, manager John Farrell made very clear what the mindset of both the front office and the team was moving forward.

"It's important to note that we're not in a development phase. With the players we've been able to bring back, this isn't a prospect-laden situation where now it's getting exposure for young players. We've added established major-league players. Our intent, our goal every night is to go out and win," Farrell said. "More than anything, where we are in the standings is unacceptable. That's why changes were made. This shouldn't be seen as a chance to ease in. I don't think that's what the Red Sox are about. It's still an approach and expectation that we share that our focus is a daily thing and that winning the game that night is important."

Farrell pretty clearly indicated that there is intention for this team to win this year, regardless of where they are in the standings. Just because the team is out of the race, that does not mean that the big league club will become a place to cultivate some of the young talent that is in the system and is hypothetically ready for the big league action.

To put a blanket statement on Farrell's management of "the kids" is slightly unfair. By all indications, the coaching staff was in favor of keeping Bogaerts at shortstop before the Drew signing (third base/infield coach Brian Butterfield has said on multiple occasions that he believes Bogaerts was on the right trade defensively before the signing.) The decision to play Jackie Bradley and not have a back-up plan is all solely on the front office.

While I believe that playing all of the young guys would probably be good to see what they have against major league competition, an argument can be made that you could be keeping prospects at their highest value by not playing them at the majors. Allen Webster's value was probably at its highest when he was showing really good stuff at the Triple-A level and had not yet stepped on the mound at the major league level.

What has Farrell been doing? Doing what he's paid to do unless he's told otherwise: win. If the organization wanted to develop their young guys at the major league level, they would tell him to do so. I can't say whether or not this conversation has happened, but it's pretty clear that Farrell has been told to win and he's putting out the lineup that he believes will give the team to do just that.

What do you think the Sox plans are for Koji [Uehara]? Since they didn't trade him at the deadline, indications are that they will keep him, right? Any info about a deal being discussed? Guesstimate on years and dollars? Would they make him a Qualifying Offer and pay him $15M?

Given that the team didn't seem to entertain many offers for Uehara, expect the team to make a concerted effort to resign their closer this offseason. A qualifying offer would almost knock out any other teams looking to add Uehara.

A qualifying offer would make Uehara one of the highest paid closers of all-time for a single season. A one-year deal with a vesting option for a second year around $6-8 million annually sounds pretty reasonable. Uehara hasn't really shown any signs of slowing down and given that his success, is based around control and movement versus velocity, the longevity of Uehara's success will probably be longer than someone based around a fastball.

Sometimes I like to think about what Uehara's numbers would look like if he started his career in the US (similar to Junichi Tazawa) and been a closer his whole career (Uehara was a decorated starter/reliever in Japan).

Which pitcher traded away at the deadline is more likely to be re-signed, Jon Lester or Andrew Miller? In each case, what would it take?

On a roll with these questions, doof54. I would say Miller, purely based on the fact that Lester is no longer tied to compensation as a free agent, and thus will have more suitors than Max Scherzer. Most of the rumblings about Lester coming back to Boston have come from the man himself or his former teammates. There was a couple of reports that the Red Sox are gearing up to sign Lester again, but it could easily be PR posturing for the team.

The team has made no indications that they are interested in signing a pitcher older that 30 to a long-term deal. The one contract offer to Lester seems to indicate that.

A potential deal for Miller will be similar to the deal that lefty Jeremy Affeldt got before the 2013 season -- three-years, $21 million. Given the value of lefty relievers and Miller's potential to be a closer based on his even splits and his nasty stuff, it'll likely be closer to $9 million than $7 million at this point.

I, honestly, don't expect either to be back with the Red Sox next year given the cost of what it will take to sign both Lester and/or Miller.

What will it take to land [Giancarlo] Stanton?

-- Everyone (although the first person to ask was PaddyC) 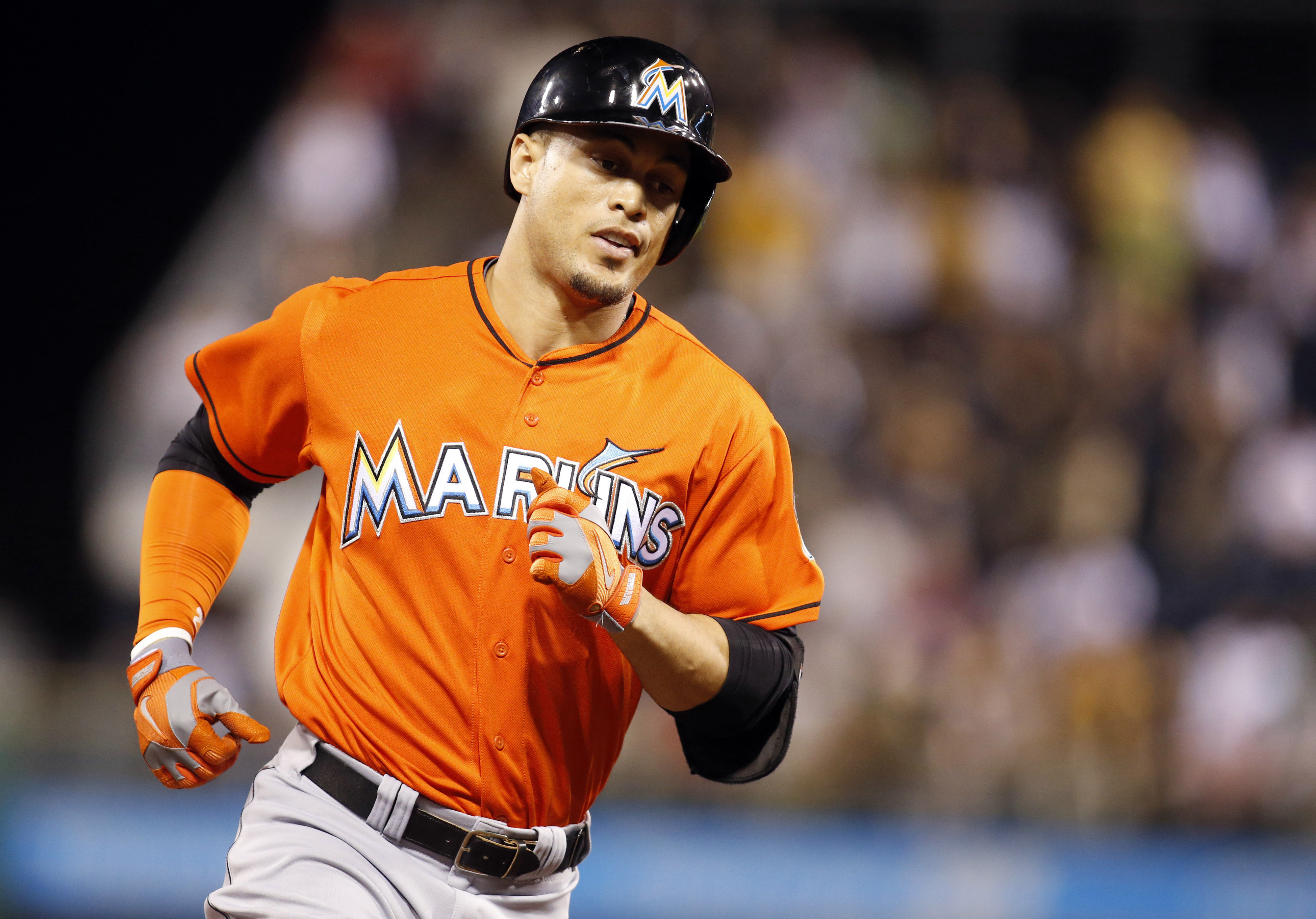 It's important to preface this with the fact that the Marlins, by all indications, have no interest in dealing Stanton and both sides have interest in a long-term deal, despite Jeffrey Loria's past. The Marlins seemingly don't want to go through the Miguel Cabrera trade again.

That being said, it will something similar to (likely more than) what the Marlins received for Cabrera: Andrew Miller (a former top-10 prospect in baseball), Cameron Maybin (another former top-10 prospect), Dallas Trahern, Eugenio De La Cruz, Burke Badenhop (the king of well-groomed beards and stirrups) and Mike Rabelo.

It's gonna start and end with Xander Bogaerts or a package of Mookie Betts and Blake Swihart. From there, add in Owens, another top-10 prospect or two and some lower-level prospects. Will Middlebrooks could be part of a package, considering Miami's interest in the third baseman in the past.

Even that might not be enough for Stanton, but then again, I don't think it's happening.

What to do with Blake Swihart?  Vazquez has obviously impressed everyone since he was called up, so what do you do if you already have a future (hypothetical) Yadier Molina but with a future (hypothetical) Buster Posey close on his tail. Obviously these are best-case scenarios, but it seems that there must be some thinking going on right now about how this will all play out. 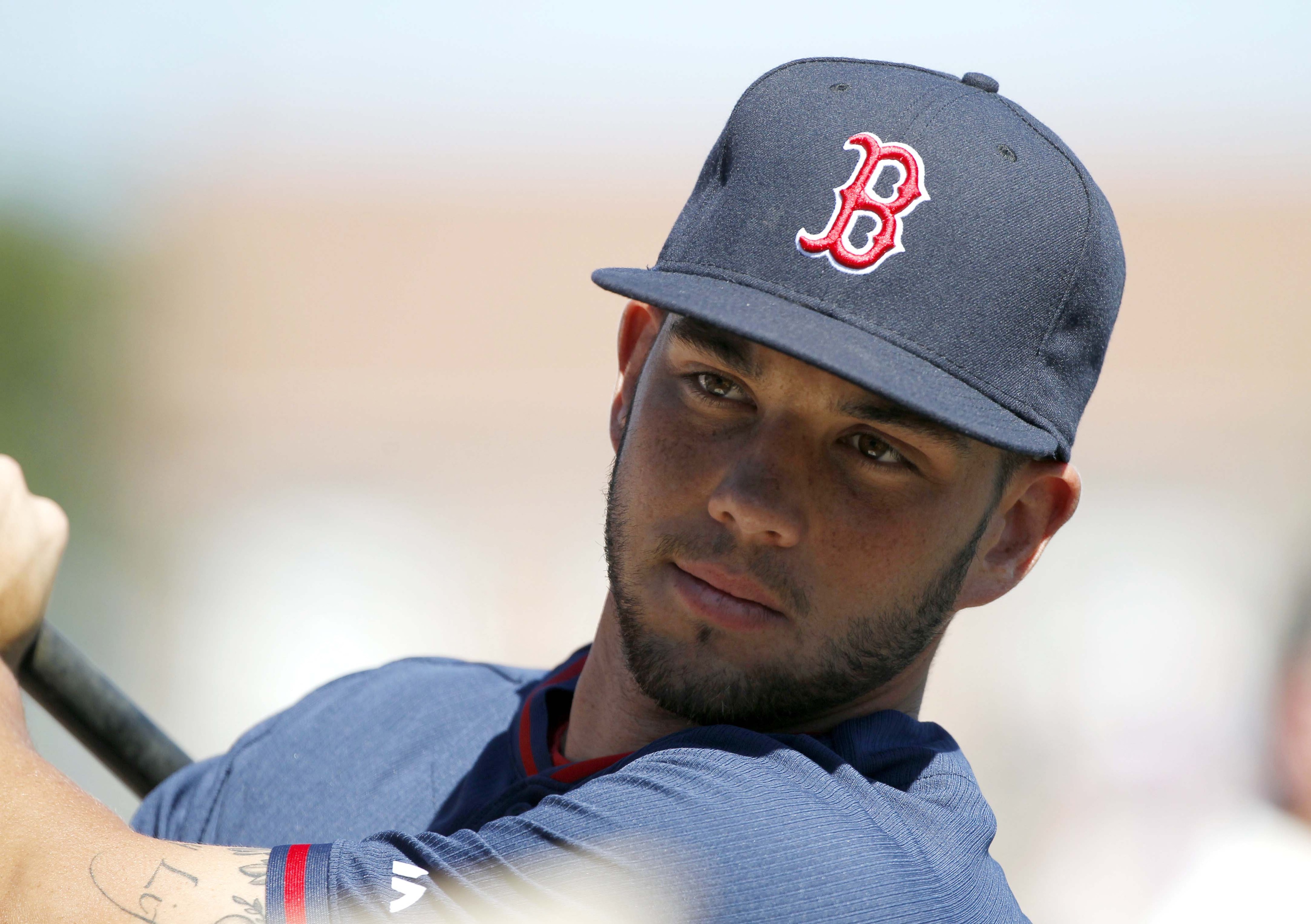 This is one of the most fascinating debates with the Red Sox right now. Ultimately, the organization and a lot of evaluators believe that Swihart has the highest ceiling for any catcher in baseball right now. Alex Speier explained it to me like this: many view Swihart as possessing the same tools as Buster Posey, just not the same ceiling with those tools. If Swihart can hit .275-.280/.350/.420 with 20 home runs and 80 RBIs (a projection that one evaluator I talked to believe he can do), he's a top-5 catcher in baseball.

That is a not a knock on Swihart's defense either. Matt Spring, a minor league catcher who has been Swihart's teammate and a mentor-type figure for the young backstop, raved about Swihart's athleticism and how far he has come, as I wrote for WEEI. Swihart has improved at calling a game and working with a pitching staff the last couple of years. On top of it all, Swihart's athleticism and upward defensive trend suggests that he will continue to improve behind the plate.

If Swihart reaches 80 percent of the potential he has, there is no reason for the team to keep an asset like Vazquez around.

Who will be the next Red Sox trade obsession after Stanton? And will it be less annoying?

I would place my bets on Chris Sale. Young lefty, bull dog pitcher with a great, team-friendly contract. Given how crazy the buzz around Stanton has been, I can't imagine it being any higher for Sale, but never doubt Red Sox fans when it comes trade obsessions.

Who is the most famous #3 in Sox history? For such a low number, it seems to be worn quite often by...well...as much as I like Ross....scrubs.

The answer to this one is obvious. Once a Red Sox franchise cornerstone. Just a spark plug for excitement and displays of prodigious power... Cleary, it's Pokey Reese.

The alternative is Jimmy Foxx, but come on, how can you not choose this guy: 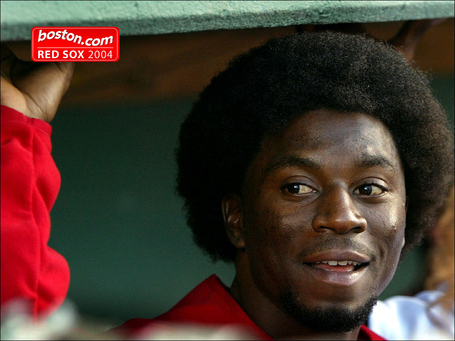 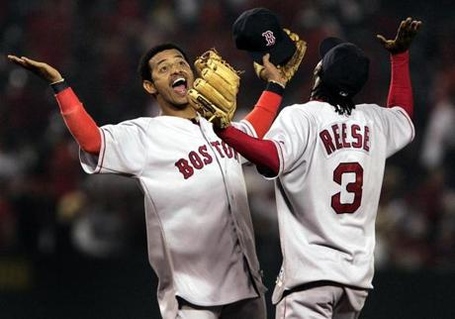 What do you think the odds are that Ben and Marc will actually give me the authority to ban people for mentioning trades for No Longer Mike? I've been yelling BANNED at them for the past couple weeks, but it doesn't seem to work.

I imagine, for Ben and Marc, the Stanton talk is just this:

Thanks for the questions this week everyone. I hope the inaugural #OTMMailbag was everything you hoped, dreamed and imagined it would be. Leave any thoughts you have in the comments. If you have any questions for next week's mailbag, shoot me an email (heyjoonlee [at] gmail [com]) or say hello on Twitter (@iamjoonlee) or leave a comment below.

I leave you with a video of WEEI.com Bruins beat writer DJ Bean's fantastic Ice Bucket Challenge to raise awareness for the Pete Frates Fund and ALS awareness (Please consider donating to an organization at ALSA.org).