How worried should we be about Jackie Bradley?

Jackie Bradley has yet to hit consistently at the major-league level. Is it time we worry about his long-term future?

Share All sharing options for: How worried should we be about Jackie Bradley?

When the dust settled on last season's amazing run through the playoffs, and the offseason began, it was basically a foregone conclusion that Jacoby Ellsbury would not be returning to the Red Sox after hitting the open market as a free agent. The majority of fans seemed to agree with the decision, as Ellsbury was set to receive a huge payday and Boston had an internal replacement ready to step into center field for the foreseeable future. Jackie Bradley didn't have a great MLB experience in 2013, but his minor-league track record and makeup suggested that he would be able to provide value great enough to justify not handing out such a large sum of money to Ellsbury. Defensively, he was thought to be near-elite, and if anything he's surpassed that reputation. Offensively, however, things have not gone nearly as smoothly, and his bat remains a huge question mark for the final two months of the year. Has he struggled for long enough that we can justifiably start worrying about him as a viable long-term solution in center field?

After being drafted out of South Carolina in 2011, Bradley shot through the system, showing all of the qualities that would allow him to be a legitimate major-league regular in his career. Along with his stellar glove, he showed an advanced knowledge of the strike zone, extreme patience, and enough power to get by. Nothing suggested that he would be a middle-of-the-order stud, but there was plenty of reason to believe he'd be at least an average hitter. Of course, things haven't exactly gone that way to this point.

Now with 463 plate appearances under his belt, Bradley is hitting just .210/.286/.305 (65 OPS+) in his major-league career. While his walk rate is at a respectable 8.1 percent, his strikeout rate is a huge concern, currently sitting at 28.4 percent. To put that into context, his K-rate is roughly eight-and-a-half points higher than league average, and puts him in between Pedro Alvarez and Mike Napoli in that category since the start of last season. Obviously, he has substantially less power than those two. 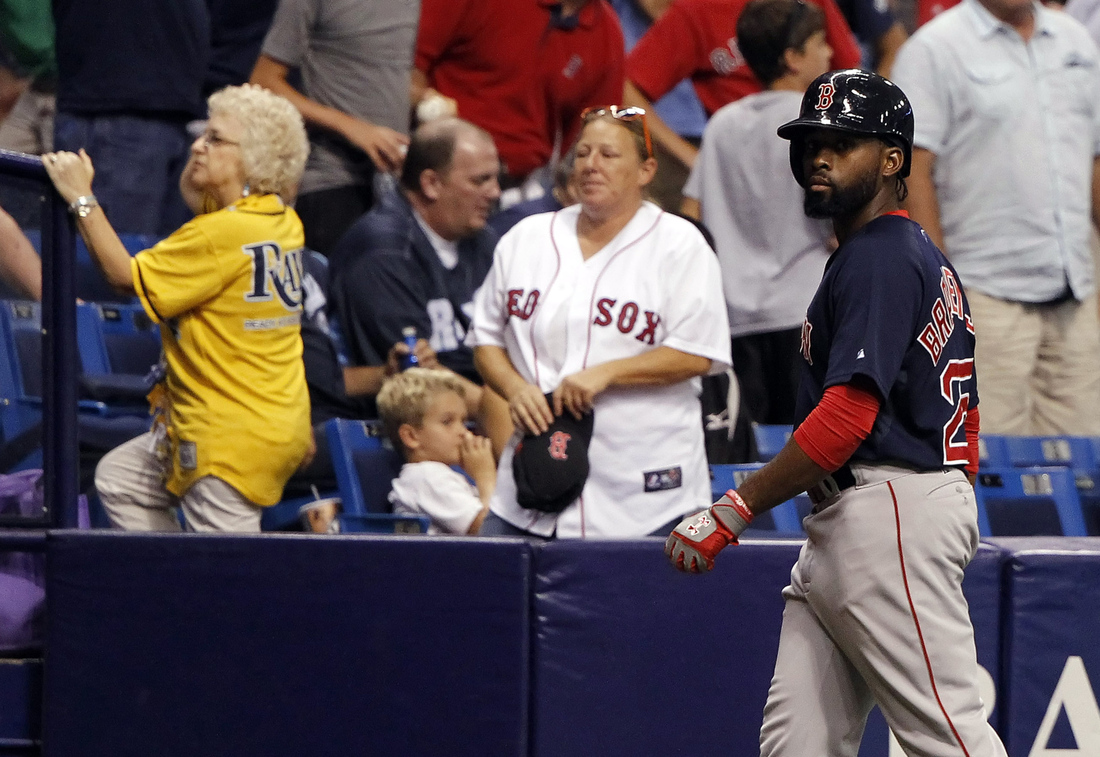 So, what seems to be the problem? For one thing, it's possible he's being too patient at the plate. He's swinging less than the average major leaguer, especially at pitches in the zone. To wit, Bradley's Z-swing% in his career is a shade under 60 percent, while the MLB average in each of the last two years has been 65.5 percent. Also of note, of course, is his whiff rate. While the typical major-leaguer swings-and-misses on about nine percent of the pitches he sees, Bradley is sitting slightly above eleven percent. His main problem seems to be with offspeed pitches, as he swings and misses at about 20 percent of the curveballs he sees, and a little over 16 percent of the changeups he sees*. All in all, it seems pretty clear just by watching him that he's overmatched by major-league pitching right now.

Still, it's early enough in his career that significant improvement should be expected, right? To test this, I used Baseball-Reference's play index tool to find players who got off to similar starts as Bradley. I searched all players in the past twenty years with at least 400 plate appearances in their first two seasons whose at-bat-to-strikeout ratio is 3.5 or lower (Bradley's is 3.2) and whose Isolated Power is no more than .100 (Bradley's is .096). Those results brought back just Bradley and Brandon Barnes. To find more results, I upped the AB/SO ratio to 4.5, got rid of the first two seasons and found some more interesting comparables. The first name on the list was Michael Bourn, who could be an intriguing case for Bradley. The former Brave is also an elite defensive center fielder with little-to-no power, though he strikes out at just about the league-average rate. Unfortunately for the Red Sox, Bourn also has a lot of value tied up in base running. While Bradley is no slouch on the base paths, he is nowhere near the base stealer that Bourn was at his peak. The other names who appeared on the list are largely back up players, like Lorenzo Cain, Gregor Blanco and Brendan Ryan. All perfectly valuable players, but not the sort you count on to be big parts of your future.

There's no denying that Jackie Bradley has been a disappointment at the plate thus far in his major-league career. It's true that he's only through 400 plate appearances, but there are a lot of problems that he needs to fix. It's almost certain that he's never going to be a power hitter, which means he needs to get his strikeout rate down. Striking out nearly one-third of the time is one thing if you're also hitting 30 homers a year, but for Bradley, it's unacceptable. Some adjustments need to be made against offspeed pitches, and he needs to stop being so tentative at the plate. With Mookie Betts making his way to Boston at a thundering pace, and Brock Holt becoming an unexpected household name (his recent cold streak aside) Bradley could very easily be pushed out of an everyday job. These next two month will be huge for him to prove that he can make the necessary adjustments to justify his name being penned into the lineup on an every day basis.