No reason to pressure Buchholz into "ace" role.

Share All sharing options for: No reason to pressure Buchholz into "ace" role.

It was just six months ago that the Red Sox's starting pitching depth chart featured Jon Lester, John Lackey, Clay Buchholz, Felix Doubront, Jake Peavy and Ryan Dempster. Five of those players are now gone, with Buchholz the last man standing. Now he's surrounded by Joe Kelly and a whole lot of young, inexperienced arms. Because of this unforeseen situation, there has been some pressure from multiple outlets  for the right-hander to take the role of the head of the pitching staff, both in terms of performance and leadership. And while that would be ideal, it's not fair to put all of that on Buchholz's shoulders.

For all intents and purposes, 2014 is officially a lost season. The team basically admitted as much at the trade deadline, and the focus is now on building towards 2015. One of the reasons we have gotten to this point is because of how disappointing Buchholz has been. In 101.2 innings, the 29-year-old has a 2011 Lackey-esque 6.20 ERA (63 ERA+) with a 4.62 FIP and a K/BB ratio that's a shade under two. In short, he's been terrible this season, making this both a strange and, frankly, unfair time to suggest he now needs to turn into some kind of ace for this rotation.

For Buchholz, the focus should be on building up confidence for next year, and hopefully using the season's closing weeks to get back to being at least a league-average pitcher. While his age would make it great if he could take up some kind of leadership role, pushing the title of "ace" on him is like expecting someone to run a marathon in their first day of rehab, rather than simply take a step. He's too important of a pitcher for the Red Sox to take such a reckless approach. Whether it's to build up some trade value for the offseason or just to feel better about himself when next spring training starts, all Buchholz needs to worry about is pitching better. 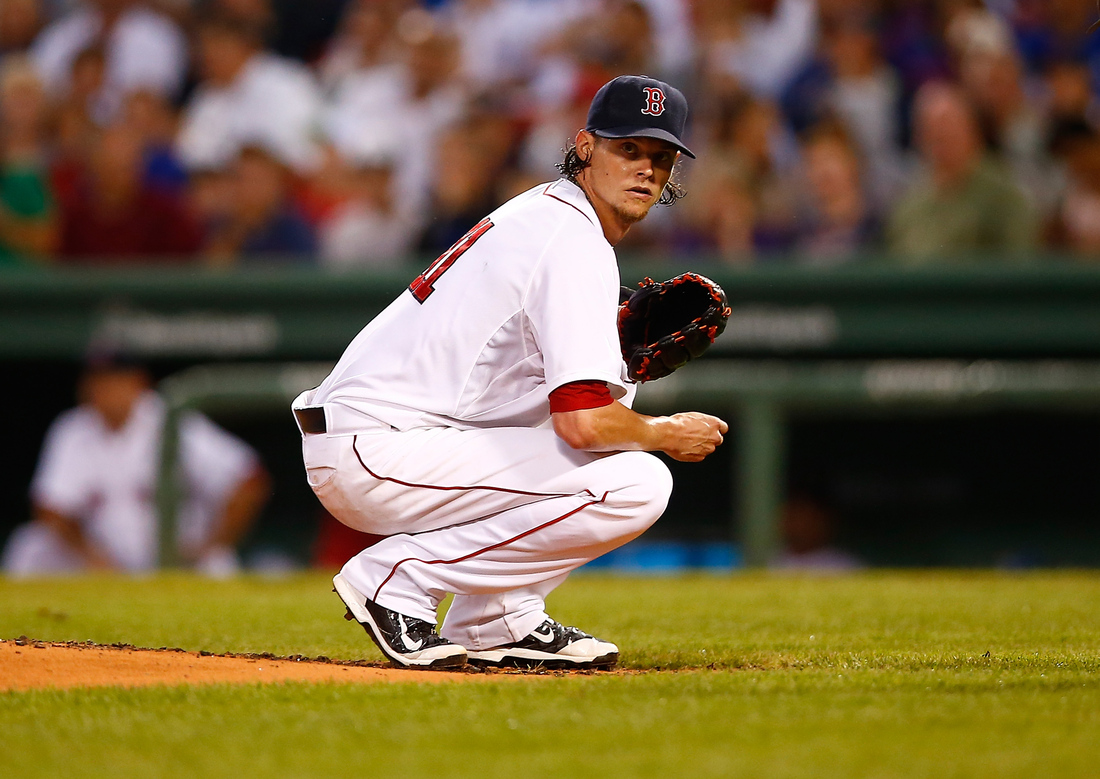 Despite his struggles, though, he remains a very interesting pitcher. Remember, he's not very far removed from being one of the best starters in the American League. Halfway through last season, he was the favorite to take home the Cy Young award. Through his first twelve starts, Buchholz thew 84.1 innings, posting a ridiculous 1.71 ERA to go with an 81/29 K/BB. Of course, the injury bug affected him once again after that 12th start, and he wouldn't hit the mound again until September. Still, there is no doubt that the talent is still there. They just need to find a way to put it back on display. He lacks the consistency (he's switched from above-average to below-average ERA+'s in each of the last four years) and the durability (he's thrown 150 innings just twice, and he's never reached the 200 inning plateau) to be the ace that many are now calling for him to be, but there's no reason he can't go back to being a mid-rotation starter.

Why Xander Bogaerts should stick at shortstop

While Buchholz is the elder statesman - and the guy with the most success at this level - in the rotation, it's natural to point to him as the new "ace." Luckily for everyone, there's no reason to believe that any of those things will be the case at the start of next season. All signs point towards Cherington being aggressive this offseason in getting at least one more established starter to put atop the rotation. Whether he brings back Lester or signs James Shields or Max Scherzer, or he swings a trade for a younger, more talented pitcher, there will almost certainly be a new number one starter in town when the Sox hit Fort Myers next February. There's no way this rotation is a finished product.

It's easy to point to the veteran in a rotation full of rookies and appoint him as the ace and leader of the group, but it's not always that simple. Buchholz is clearly not right at the moment, and the focus for him needs to be limiting opponents' hard contact and getting a few more strikeouts. Putting the pressure of leading the entire depth chart on his shoulders is neither far, nor reasonable. In an ideal world, he would be taking these pitchers under his wing for the rest of the year. But, while he could and should give them advice from time to time when they ask for it, his confidence level right now is not conducive to being a true leader. The focus has to be getting into the best possible frame of mind to start the 2015 season, whether that's for another team or the Red Sox. By next spring, Buchholz will (hopefully) no longer be the pitcher with the best major-league track record on the roster. And though it's easy to throw the word "ace" around when he's the only established big-leauge starter on the team, that's an unfair position to put him in.