Can the Red Sox rely on Brock Holt?

At times, Brock Holt has been the best player and lone bright spot on a bad Red Sox team. Taken as a whole, though, Holt's season might not be enough to justify relying on him in 2015.

Share All sharing options for: Can the Red Sox rely on Brock Holt?

On June 1st, Brock Holt picked up four doubles in four at bats against the Tampa Bay Rays, stealing a base and adding a walk for good measure. It was the exclamation mark on a series of excellent performances from Holt, who sparked the Red Sox to a seven-game winning streak that, for a brief period of time, looked like it might propel them back into contention after having dropped ten straight.

Holt would finish the day with a batting line of .337/.385/.500 and, while the rest of the month wasn't quite as kind to him as that, June was ultimately Holt's greatest stage, the young infielder/outfielder/anything-they-asked-him-to-be showing the ability to hang at the plate against major league pitching for an extended period of time. Ask Red Sox fans their plans for third base in 2014, and many would have dropped Holt's name, assuming they didn't have him penciled in elsewhere.

Really, though, it's all been downhill since June 1st. The decline started slowly enough, but has picked up steam in a hurry. July saw Holt hit just .278/.328/.389, and August has been just that much worse, with a complete lack of power dragging that figure all the way down to .257/.319/.295. Taken as a whole, Holt's season still looks fine, but they're not the sort that demand a run as a starter on a team which can support a payroll north of $150 million.

Brock Holt suffers from the same problems as so many other "Jack of all trades, master of none" type players. He has some speed, but not enough to really make a significant impact on the game, or to make up for a relative lack of power. He's not a total free-swinger, but he strikes out just often enough and walks just rarely enough that, without the ability to leave the park on a regular basis, Holt needs an uncomfortably high BABIP to produce at an above-average rate at the plate.

The one area where Holt excels is defense, but there it's versatility rather than outright quality that sets Holt apart. He is not Mike Carp, who was often attributed with the ability to play both the outfield and infield while really being able to do little more than stand in left or at first. Brock Holt can play defense, and he even has a penchant for the highlight play, but he is not the sort of player who does enough with the glove that any offensive deficiencies can be forgiven in the name of run prevention. 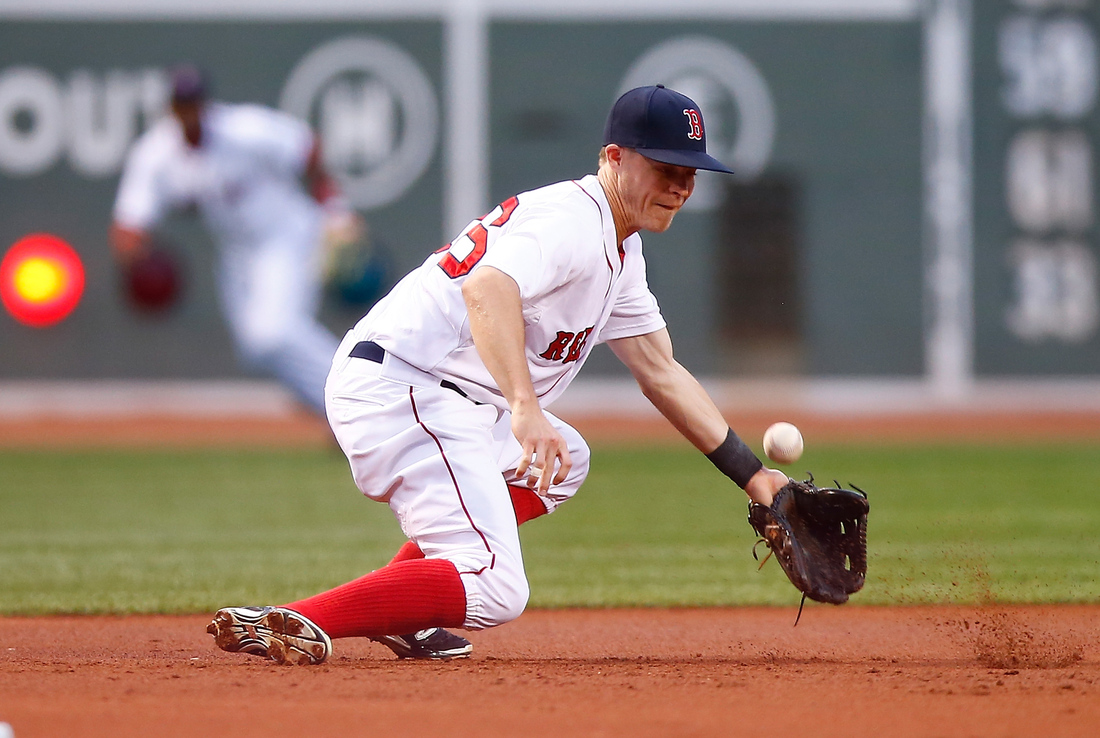 That being said, if the Holt we've seen this year is the real Holt, then he doesn't need that level of glove. Far from deficient offensively, Holt has a 104 wRC+, and has produced 2.3 WAR in roughly three-fourths of a season worth of playing time. But this is all a pretty big "if" predicated on Holt either maintaining the .357 BABIP that has seen him to this point, or improving in other areas to compensate. At 26 years old, and with just 600 major league plate appearances to his name, there is certainly room for growth, even if Holt is already outperforming expectations from his minor league days.

OTM Mailbag: What to do with the outfield?!?

The under-appreciated Mike Napoli OTM Mailbag: What to do with the outfield?!?

If there's a starting position for Brock Holt on the 2015 Red Sox, it's at third base. Will Middlebrooks has given the Red Sox little reason to go back to him for a fourth try in 2015, Xander Bogaerts seems slated for shortstop in the future, and Mookie Betts' arm is not ideal for the left side of the infield. There are some interesting free agent options available, but with a glut of outfielders, staples at second and first in Pedroia and Napoli, and Xander at short, it's Holt's best chance for a starting role.

If the Red Sox are wise, however, they should fill that spot in some other way. The one truly exceptional quality Holt boasts is the ability to fill so many roles as a bench bat. Off the bench, he becomes the immediate answer for any injury to any of Boston's non-catcher position players, and allows John Farrell to get his starters rest whenever necessary. If you're backing up seven different positions, it's not that hard to get a full-time job's worth of plate appearances. If Holt is worth the three wins he's on pace for this year, then he'll still have ample opportunity to show it. If he's not, well, the Red Sox will not be asking him to be contribute more than a bench player is expected to.

It's possible all this changes with any number of trades in the offseason. We might be looking at a very different roster come 2015. Maybe even one without Holt. Whatever the final product is, however, the Red Sox would be taking a risk if they're turning to Brock Holt to be more than a first line of defense against injuries to more reliable or more promising players.

Editor's Note: SB Nation's partner FanDuel is hosting a one-day $18,000 Fantasy Baseball league for tonight's MLB games. It's $2 to join and first prize is $2,000. You can join in now using this link.