In a season defined by disappointments and youth movements, one veteran's typical offensive production has been swept under the rug.

Share All sharing options for: The under-appreciated Mike Napoli

In today's baseball world, youth reigns. Prospects are more hyped than ever, payroll efficiency is a key part of all analysis, and developing players through your own minor-league system is crucial to winning. It's not that any of these things are inherently false, but this attitude does take some of the spotlight away from roaming veterans who produce. Superstars still are, and always will be, appreciated, but the caliber of player one notch down is affected. This year's Red Sox team has been a fine example of this phenomenon. While the majority of the focus has been on Xander Bogaerts, Jackie Bradley, Mookie Betts and the other countless prospects throughout the farm system, one particular performance has been mostly swept under the rug. The title of this post makes no secret of who I'm referring to.

For what seems like forever, Red Sox fans have been trying to figure out who the long-term first baseman will be. We've gone from Lars Anderson to Alex Hassan to Travis Shaw, and there's even been some premature hope pinned on 2014 second round pick Sam Travis. When the dust settled after the trade deadline, first base again came into focus. Allen Craig can play outfield next season, people have said, but the hope is that he can fill in for Mike Napoli when his contract expires. The problem with that attitude is that it's ignoring the possibility of the current first baseman sticking around beyond 2015. This isn't an issue the front office needs to deal with in the immediate future, but throwing out Napoli as an option underplays just how great he's been in his two years in Boston. 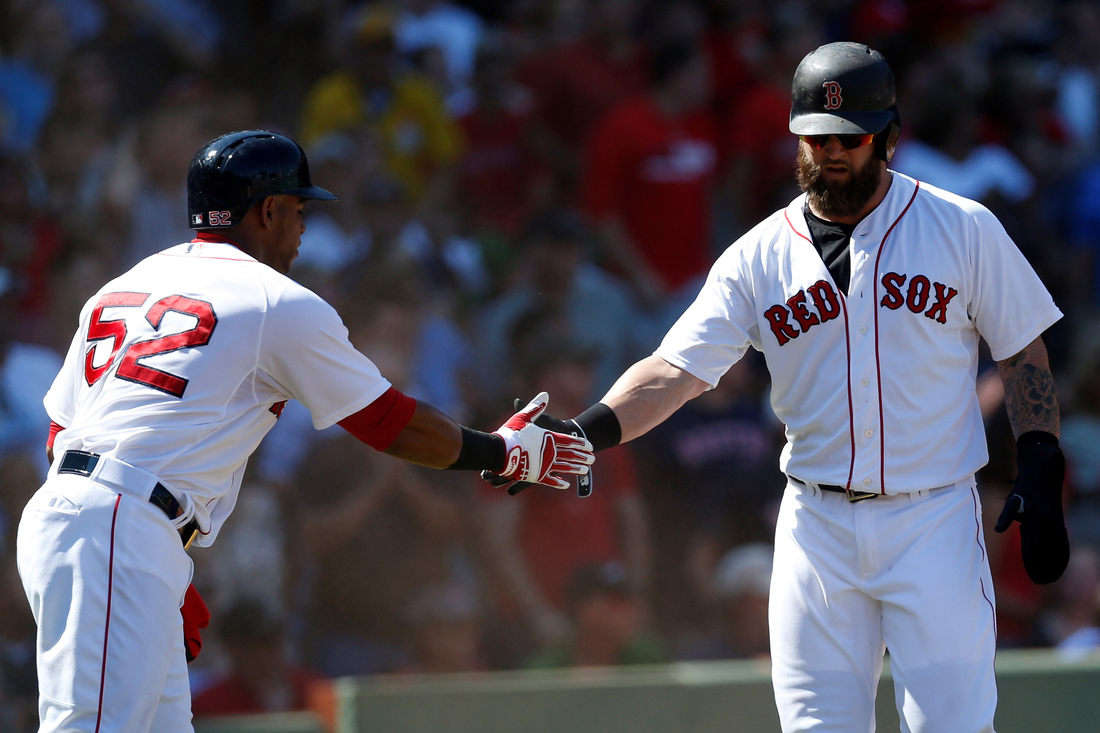 Since signing with the Red Sox prior to last season, the 32-year-old has racked up 1,026 plate appearances in a Boston uniform. In that time, he's posted a .258/.367/.462, good for a 130 wRC+ That wRC+ ties him with Carlos Gomez for 26th in all of baseball since that time, and just behind hitters like Victor Martinez, Carlos Santana and Buster Posey. While Napoli will likely never hit for a high average due to striking out so much, he's still able to produce at a near-elite level because of tremendous patience and off-the-charts power. While in Boston, Napoli's .204 Isolated Power is tied for 20th in baseball with Yoenis Cespedes. Furthermore, his home-run-to-flyball ratio is 12th in baseball over the last two years, ahead of sluggers like David Ortiz, Jose Bautista, Edwin Encarnacion and Mike Trout.

It's that power that makes Napoli such a valuable piece for the Red Sox. As many have mentioned before, including Brian MacPherson earlier this week, power is way down across the game. The average ISO across the league has gone from .162 ten years ago down to .137 today. Having elite power bats in the middle of the lineup is a valuable commodity in today's game, a fact the Red Sox admitted to when they acquired Cespedes at the deadline. It's also one of the main points behind trading the farm for Giancarlo Stanton. Napoli has that same quality, yet is rarely mentioned in the same sentences as other power hitters.

Even in a year when his power is down a bit, the first baseman has been able to get on base at an impressive clip. Consistency has been the name of Napoli's game over his career, as he's had a wRC+ below 110 just once (109 in 2007), and has been at or above 115 in every other year of his nine-year career. On top of all of this, he has worked hard to become a good defensive first baseman despite having never played there on a full-time basis before coming to Boston. While the advanced numbers aren't quite as high on his glove as they were last year, the eye test confirms that he has performed very well at his new position.

Whether or not Mike Napoli will be Boston's first baseman when the 2016 season begins remains to be seen. He's still under contract for next season, and he has done nothing to lose his spot. There will be calls to trade him this offseason due to his age and past injury concerns, but that would be unwise. Allen Craig has hit in the past, and Will Middlebrooks and Garin Cecchini both possess intriguing upside, but none of them are as sure to produce as Napoli. While he's flown a bit under the radar in 2014, the Red Sox first baseman has continued to be one of the better hitters in all of baseball. It's easy to be swept up by the promise of young players just starting their major-league careers and look to the future, but it's important to appreciate what's happening in the present, too. Mike Napoli is hitting at an extremely impressive clip right now, and is showing no signs of slowing down. And I, for one, am having a blast watching him do it.