Should the Red Sox sell high on Brock Holt?

After bursting on to the scene this season, could the Red Sox look to capitalize on Brock Holt's success this offseason?

Share All sharing options for: Should the Red Sox sell high on Brock Holt?

Seasons like this really stink. When you come into the year expecting big things from a team, and then they fall flat on their faces, it has a way of sucking the energy right out of you. Because of this, it's always important to look for the bright spots to focus on. For example, in 2012, we saw the emergence of Junichi Tazawa in the bullpen. That was the year Will Middlebrooks burst onto the scene as a rookie. It was the year we fell in love with Cody Ross and his bat flips. This year has had a similar type of feeling around it, and there have been a few corresponding bright spots. At the top of that list has to be Brock Holt, who has come out of nowhere to become the team' everyday leadoff hitter. Every time he starts to look like he's slowing down, he comes right back better than ever. This has created an understandable attachment to him among the fan base, which makes the next question a tough one to ask. Should the Red Sox consider selling high on the super utility player this offseason?

Let's start by looking at just how incredible Holt has been this season. After losing out on the utility man role to Jonathan Herrera, he began the year in Pawtucket and tore it up to the tune of a .315/.380/.454 batting line. He was up in the majors permanently in the middle of May, as the corresponding move for Will Middlebrooks hitting the disabled list. He's responded to his promotion for being one of the best players on the Red Sox this season. The 26-year-old has racked up 427 plate appearances this season, slashing .291/.343/.397, good for a 107 wRC+. He's done this while playing almost every position on the diamond. Despite coming into the season strictly as a middle infielder, in 2014 he has played at least a couple games at each position on the field other than pitcher and catcher. 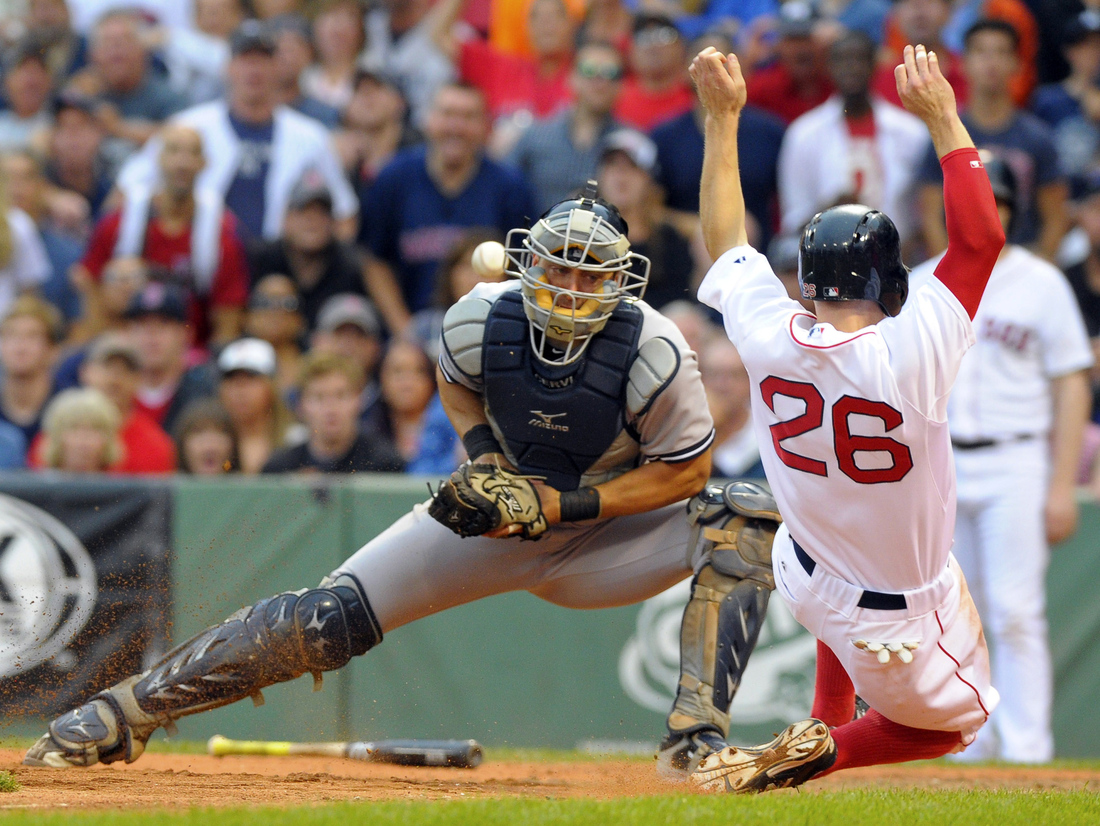 Before we move on to why the Red Sox could consider selling high on the former Pirates farmhand, it's important to look at the reasons it makes sense to keep him. Holt's calling card has become his versatility, and the value that comes with that cannot be understated. It helps keep the lineup going through injuries, and allows managers to mix and match his lineups based on match ups. There's a reason Ben Zobrist has quietly been one of the more valuable players in the game throughout his career. On top of that, he's a lefty who can play outfield, which, as I discussed here, could be on short supply for the Red Sox in 2015. There's also the fact that he will be paid the league minimum next year. While Boston should have plenty of money to spend, and this shouldn't be a huge concern, money is always something to keep in mind.

Now, with all of that being said, it could still make sense for the Red Sox to look to capitalize on the value Holt has created for himself this year. We keep coming back to the potential glut in the outfield next year, but it's something that needs to be addressed. The team isn't going to go into spring training next year with all of the outfielders currently in the organization. And this isn't even considering Rusney Castillo, who has reportedly narrowed down his choices to Boston and Detroit. While Holt's left-handedness could be valuable in that group, they still have Daniel Nava and Jackie Bradley to fill that role.

It's also important to consider just how out-of-nowhere this season has been, too. Looking at some scouting reports and analysis from years prior to this one, no one could have seen Holt performing like this. Pirates writer Pat Lackey talks about Holt here, and notices how much of his production is driven by batting average, something that is tough to maintain without power. Following his first call-up to the majors in Pittsburgh, John Sickels called him a "utility player with a solid bat," and gave him a C+ as a grade. Following his trade to Boston, R.J. Anderson dedicated most of his space to talk about the Joel Hanrahan acquisition, but did discuss Holt at the end. He mentioned that Holt's upside is that of a utility player. It's also interesting to consider that Dan Szymborski's ZiPS projection system had him pegged for a 73 OPS+. Players outperform their expectations all the time, but have we seen enough to be sure that Holt's production is here to stay?

Are the Red Sox closing in on Rusney Castillo?

Are the Red Sox closing in on Rusney Castillo?

The obvious rebuttal to this is that teams aren't dumb, and won't go overboard based on 427 plate appearances over one season. Obviously, this is true. Teams have a hell of a lot more resources than us, and have infinitely smarter baseball minds. Still, all it takes is for one team to be confident Holt can be an everyday player going forward for a good trade to happen. Think back to last season, when Jose Iglesias was infield single-ing his way into our hearts. The Red Sox were able to turn that performance - which appeared much more fluky than what Holt is doing right now - into Jake Peavy, a legitimate starting pitcher who helped win a World Series. Whether it's part of a package or by himself, Holt could carry similar value on the trade market this offseason.

As we've discussed, Ben Cherington and the rest of the front office have plenty of decisions to make this winter regarding the logjam in the outfield. He'll surely consider dealing is Brock Holt, despite the fact that he's turned into the most unlikely fan favorite this year. Based on his track record and perception coming into this year, there's reason to believe this could be a fluke performance. While a utility player is valuable to have, he may have built up enough value this year to be best utilized as a trade chip. Something will be done with all of the outfielders on the roster, and Brock Holt is just another possibility to be in another uniform in 2015.