Stop trying to get rid of Clay Buchholz

Clay Buchholz has been awful in 2014 and frustrating through much of his career. But some Red Sox fans are still too quick to want him gone.

Share All sharing options for: Stop trying to get rid of Clay Buchholz

Red Sox fans are not best pleased with Clay Buchholz, and it's not hard to understand why. Those who have watched all 21 of his starts this season have been treated to something like four good games, six decent ones, and nearly a dozen outright disasters. Clay Buchholz is not the reason this season was lost, but he's emblematic of the underperformance of so many players that is behind the Red Sox' 56-70 record.

Still, the frustration has perhaps gone too far. Buchholz can't start a single game without calls for his head coming from the fanbase. Perhaps this is the case of the vocal minority, but it's a pretty constant refrain: the Red Sox need to be rid of Clay Buchholz once and for all, starting as soon as possible.

What do we know about the 2015 Red Sox? We know they're going to need help in the rotation. As of right now, Buchholz would likely be the Opening Day starter, which is a pretty awful sign for any team given his 5.94 ERA. The hope is that they'll be active in the free agent market, bringing in perhaps a pair of more reliable options, but even with Joe Kelly (who is hardly setting the world on fire himself), there's still two spots left to be filled.

What do the Red Sox have to fill those roles? Quite a few prospects, but few of them with front-line potential. Allen Webster could reach impressive heights, but also has the lowest possible floor if his control never comes around. Henry Owens is the best arm in the system, but fans who talk about him as a future ace (or just #1 starter, if you want to avoid that loaded term) are likely overrating him. Then there's Rubby De La Rosa, Brandon Workman, Anthony Ranaudo, Matt Barnes, and Edwin Escobar. 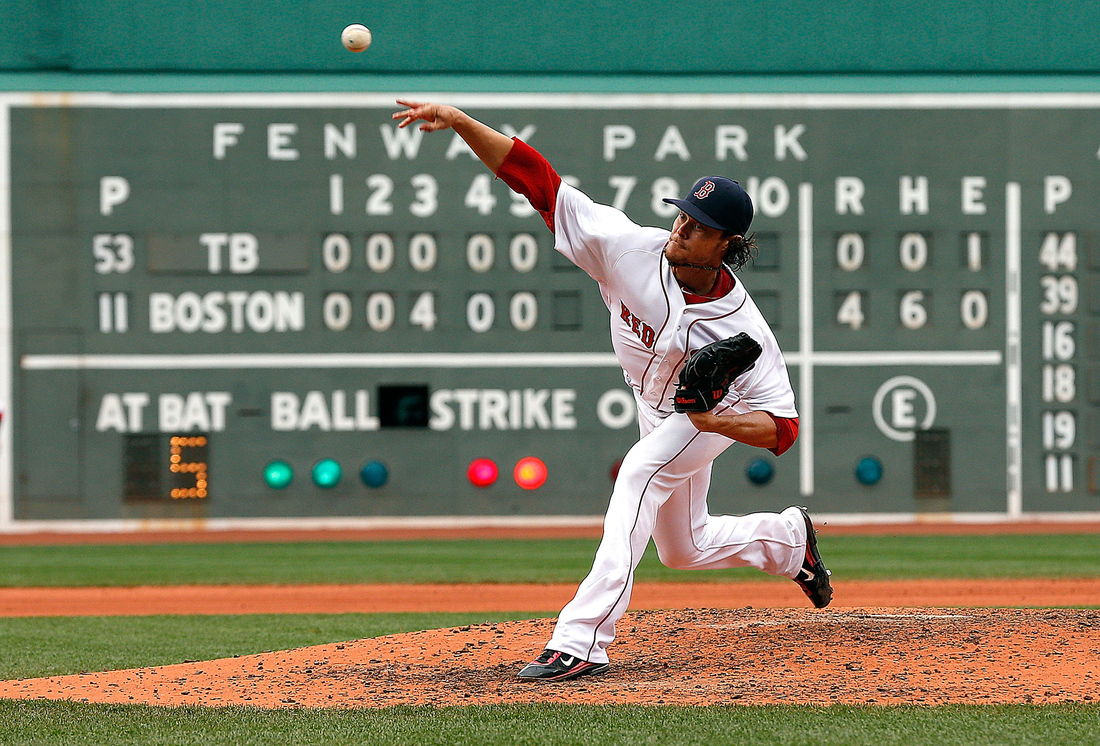 This is Clay Buchholz in 2013. That scoreboard is why you don't give up after one bad year.

It's not entirely fair to call these players "interchangeable," but...let's be honest, they kind of are for Boston's purposes. The 2015 Red Sox will be able to throw one guy after another at their rotation until one of them sticks, without having much compunction about moving on from one option to the next. The only issue will be how to find time for them all in Pawtucket, assuming none are traded away.

On a team with an almost arbitrarily large number of interchangeable fifth/sixth starters, Clay Buchholz is a fantastic fit. It's not exactly glowing praise for the Pitcher that was Promised, if you will, but the Red Sox have to be able to make decisions on Buchholz without letting any disappointment or frustration with the pitcher influencing them. That, as always, is for the fans.

Think about it: what can Buchholz be? We have the answer from 2010, 2011, and 2013. Buchholz can be a dominant starter, one whose presence in the rotation can turn a team from good into great. I don't care how loaded the term is, Clay Buchholz from the first half of 2013 is an ace. The potential for that is far greater in Buchholz than in any of their various Triple-A arms.

What will happen with Daniel Nava in 2015?

Rusney Castillo's decision expected by week's end What will happen with Daniel Nava in 2015?

You may think that Buchholz regaining his early 2013 form is too long a shot to bother with, but here's the thing: it costs the Red Sox nothing to do so. Yes, he's owed $12 million in 2015 (with a $6 million hit to their CBT figure), but that's not actually part of the equation. Unless the Red Sox are going to make the classic mistake of trading low, likely eating some money in the process, Buchholz' contract is a sunk cost. The Red Sox will be paying it whether or not they give Clay a shot in 2015. The only other cost is a roster spot which, frankly, is not all that important given that the replacement for Buchholz would likely just be one of the minor league arms rather than yet another free agent.

And, really, those many replacements are what make this situation so perfect. The biggest knocks against Buchholz are inconsistency and injury, but he's no worse a risk for the Red Sox in terms of winning or losing games than any of their prospect arms, and should he perform poorly or get hurt, the Red Sox will just be moving on to the arm that Buchholz pushed back a step in line.

As with every player, there has to be some point where you cut bait and call it a lost cause. That time is not now for Clay Buchholz. It's not one season removed from three months spent looking like the best pitcher in the game. It's not heading into a year where, if he should fail, the Red Sox will have plenty of options to replace him with. It's understandable Red Sox fans are frustrated, but understand this: the Red Sox have a better chance at being a great team in 2015 if Clay Buchholz is their first option for one of those last two spots rather than one of the many pitchers who can be stashed away in Triple-A. At least for now, drop the calls for his head, and start hoping that 2015 brings back the ace we saw in 2013.