These two might not be game-changers, but the potential is there to be useful Boston pitchers for a while.

The Red Sox already had a plethora of pitching prospects, but that didn't stop them from acquiring a couple more before July's non-waiver trade deadline. It's a good thing, too, as they traded away not only Jon Lester and John Lackey last month, but also Felix Doubront and Jake Peavy, leaving plenty of space available to fight over in Boston both now and in the future. Edwin Escobar and Eduardo Rodriguez aren't going to replace Lester and Lackey, but the potential is there for them to fill in for the mid- and back-end arms that were Peavy and Doubront, and that's valuable.

Eduardo Rodriguez is the jewel of the prospects the Red Sox managed to bring back in a month that otherwise focused on acquiring veteran players who were still under team control, and all they had to do was send lefty reliever and rental Andrew Miller to Baltimore for the privilege. Rodriguez struggled at Double-A with the Orioles, but he's 21 years old and had made 27 starts there. That's something, sure, but between his youth, stuff, and prior performance, we can cut him a little slack for temporary issues, or at least be patient and see what happens. Remember: we're impressed by Henry Owens' performance as a 21-year-old at Double-A for a reason.

More: Why Mike Trout is the worst thing to happen to Xander Bogaerts

Rodriguez has been doing well since coming to the Sox, too, with 16 strikeouts in 11 innings in his first two starts for the Sea Dogs, and all with just one run allowed. It's a small sample, obviously, but it's something to watch for, as the Orioles don't necessarily have the best track record when it comes to developing their pitching prospects into starters.

Baseball Prospectus' Nick Faleris, a member of their scouting analysis team, believes Rodriguez has a potential future as a mid-rotation arm. "He's got a solid build and has shown a fine ability to handle a pro workload. The delivery is easy, generally repeatable, and his actions are smooth. Rodriguez looks like a potential mid-rotation arm with a middle-reliever floor. The likely outcome is a number four or number five starter, though." 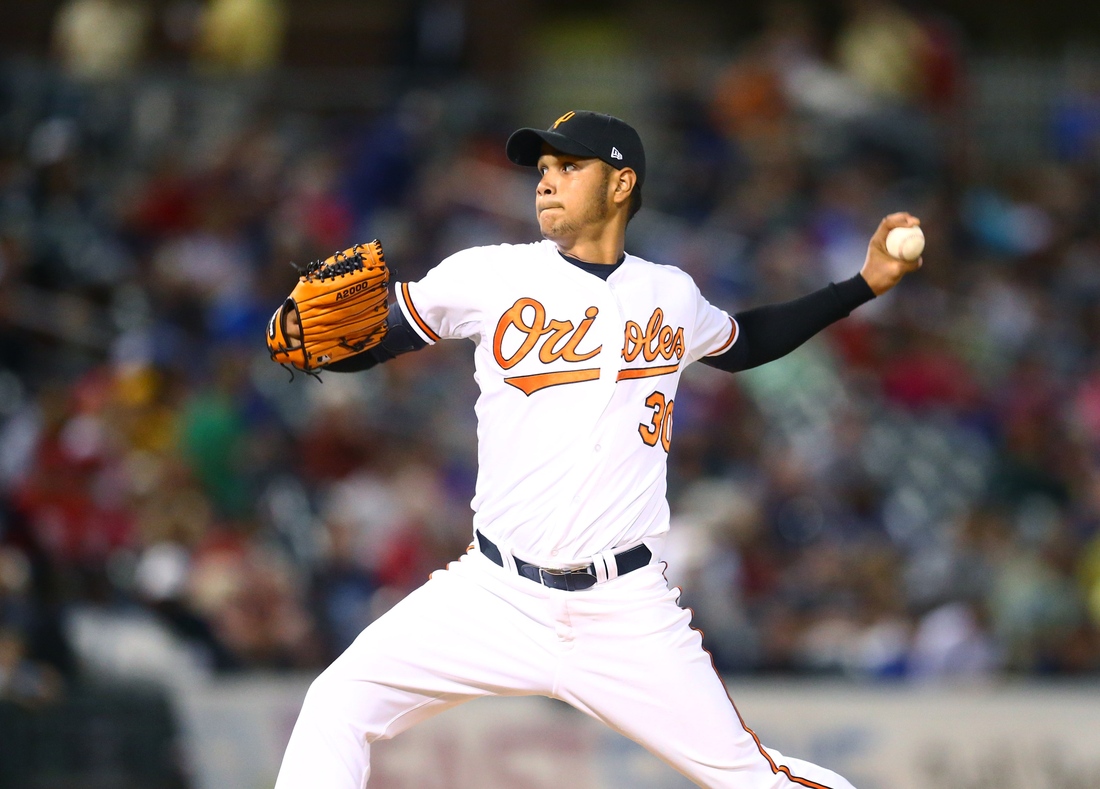 Why the likely outcome as a back-end arm? Rodriguez still has plenty to work on with his repertoire, even if there's promise there. Faleris says that Rodriguez's slider is "soft" and "doesn't show that hard bite you want in a swing-and-miss offering" but also says that if he can tighten it up, it would grade out as his best pitch, a 60 on the 20-80 scouting scale. The fastball generally sits in the low-90s, even though he can throw it harder than that, and Faleris sees it grading out as a 55 if Rodriguez can learn to work both sides of the plate at the knees: right now, he leaves it up a little too often. Last, there's his change-up, which sits in the low-to-mid 80s but is too "firm" according to Faleris. The suggestion here is experimentation with his grip, which could very well happen now that he's switched organizations and has a new set of eyes on him.

The pieces are here to be more than a back-end arm, but they need to come together if that's to happen. As said, though, Rodriguez is young, left-handed, and just switched to an organization that has done a solid job of producing big-league arms over the last decade: there are plenty of reasons to believe he can become something more.

The hope is less for Edwin Escobar, acquired from the Giants in the Jake Peavy swap, but there's still reason to pay attention to him. Escobar is a 22-year-old left-hander who didn't pitch well in his first exposure to Triple-A, but between his age and the fact that the Giants' Triple-A affiliate is in the offense-heavy Pacific Coast League, he can be forgiven to a degree. Like with Rodriguez, Escobar has flourished in his brief time in the Red Sox organization, racking up 12 innings in his two starts while striking out 3.3 times more batters than he's walked en route to a 1.50 ERA.

Escobar has averaged 5-2/3 innings per start in 2014, despite the aforementioned PCL work. It's important to watch and see how much longer he can go now that his environment is more neutral rather than actively working to have him removed from his starts, but to a degree, that's just superficial improvement, as Faleris notes. "Statistically he'll benefit from a move from the PCL. Ultimately his projection is going to hinge on tightening up the arsenal and the command, though. If everything clicks you could have a good number four, but on his present trajectory he looks more like a lefty specialist out of the pen."

Where does the Red Sox pitching stand now?

The Red Sox have plenty of pitchers, but do they have enough good ones?

Ball, last year's number seven overall pick, has made huge strides since the beginning of July.

Where does the Red Sox pitching stand now? Why Ball's season preaches patience for prospects

Faleris notes that Escobar has no issues throwing strikes, but that he doesn't necessarily throw quality ones by major-league standards: there's a huge difference between what you can get away with in the minors and in the bigs, and Escobar needs to learn to work the corners more to see some of the same success he's had repeat in the future. This hurts him against right-handers already, as Escobar's secondary stuff just doesn't work as well when the fastball isn't setting it up properly.

Escobar's change-up flashes plus when he's got deception working in his favor, though, Faleris says that it's truly an average offering. That's a problem, as it's the only non-fastball pitch he could effectively use against the right-handers who are likely to give him fits. A tighter slider could give him an effective breaking ball to go with his fastball, but like the change, it's just an average pitch at present.

You can see the path to relief laid out plainly for Escobar, but at his age, there's little reason to push him to that role right now when he could still progress as a starter. He's not like Allen Webster, Brandon Workman, Anthony Ranaudo, and Rubby De La Rosa, who are all already in the mid-20s: Escobar might already be on the 40-man, but he's in Triple-A and younger than every starter the Red Sox have at Double-A except for Eduardo Rodriguez -- Rodriguez isn't the only legitimate pitching prospect there, either, thanks to Brian Johnson. There's time to be patient, and given the Sox' tendencies, they'll likely be just that with Escobar.

These two arms won't replace Jon Lester or John Lackey, but they've been added to the stable of pitching prospects in Boston. They could both play a role in a future Red Sox rotation as a mid- or back-end piece, or they could be packaged in a deal that helps give Boston the starter they need higher up the ladder. Options are not a bad thing, and the Sox managed to get both of these without giving up all that much for the privilege.