A farewell to Jon Lester

In which we say goodbye while hoping it's just see you later.

Share All sharing options for: A farewell to Jon Lester

It's virtually impossible for a Boston Red Sox fan between the ages of 25 and 35 to speak rationally about what constitutes an ace. Our formative years as attentive, fully aware baseball fans were spent watching Pedro Martinez flirting with a no-hitter every five days. It reaches absurd levels at times; I've found myself scoffing at the breathless reports of dominance after every Clayton Kershaw start this year. "Sure, Kershaw's great, but Pedro was doing the same thing at Fenway back when the league ERA was 4.5 and everyone's number-seven hitter was slugging .480." "Oh, his ERA+ is 207? That's nice. Call me when it hits 290." And so on. I bring this up not simply to gush about Pedro, although I will of course take any excuse for that. I bring it up so that when I talk about Jon Lester as Boston's ace, it's clear how high that praise is.

Yesterday, as anyone who was awake for twenty minutes knows, Boston traded Lester to the Oakland Athletics for Yoenis Cespedes. Jonny Gomes went along as well, to provide the remaining six of his annual 20 WAR to the A's. We won't spend too long rehashing the situation, I think I've made my feelings on Boston's handling of Lester's contract clear. To nab Cespedes out of that mess is actually pretty impressive, and I remain firmly on board with any plan to re-sign Lester once the season's over. With any luck, Lester's time in Oakland is a minor blip in a long career with the Sox. But the reality is that free agency is uncertain, and we may well have seen the last of #31 in Boston's home whites.

Lester came into the Sox organization in 2002, drafted in the second round, five picks after Robert Andino. (Lester's one of two players with over 30 WAR from that round, the other being Joey Votto.) The young lefty took the standard path through the minors, finally making his way into the big-league rotation in 2006. A lymphoma diagnosis at midseason threatened to derail his career entirely, but after a year-long battle with the disease, he returned to the team in July of 2007, winning his first start back against Cleveland. Three months later, he was standing on the mound in Denver as the Red Sox prepared to sweep the Rockies for their second championship in four years. He's missed two starts since.

Reliability seems like a strange thing to focus in on, really. When we define great pitching by signature moments, or blazing fastballs, or a curveball that breaks the knees and spirits of opposing hitters, praising reliability almost feels like not enough. But that's been Lester's defining quality for his entire time with Boston. 32 good starts, 200 good innings. Clockwork. There have certainly been signature moments in Lester's career. The no-hitter against KC back in 2008, his 15-K destruction of Oakland earlier this year. But he's been one of those pitchers for whom the aggregate is far more impressive than the individual starts. Going forward this season, and perhaps ever after, what I'll miss about Jon Lester isn't the possibility of transcendence every five days, but the simple reassurance of a good start every fifth day. 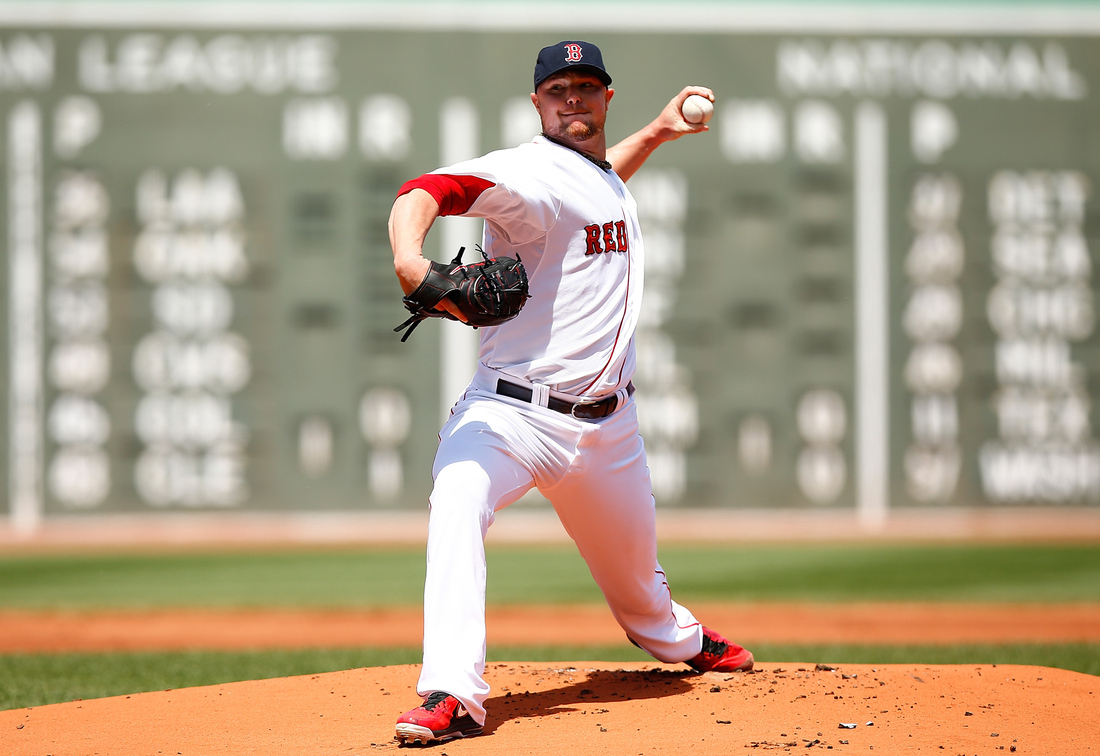 The playoffs, though. The playoffs we'll all remember. Lester carried that reliability with him in previous playoff appearances, but last year, he took up the ace's mantle and ran with it. In five postseason starts, Lester pitched 34.2 innings and allowed six runs. In a postseason littered with Cy Young contenders, Lester more than measured up. Not coincidentally, a Boston fanbase envious of the Verlanders and Kershaws and Wainwrights of the world finally realized that they'd had their own ace all along.

Why I hate the Jon Lester deal

Why I hate the Jon Lester deal Is Mookie Betts a trade chip now?

This season, it seemed like Lester realized it himself. Always good, this year he's made the leap to dominant, posting his highest strikeout rates and lowest ERA. Sitting in the low 90's with a cutter he can put anywhere in the zone, Lester's grown into a mature, intelligent pitcher able to roll with odd strike zones and adjust on the fly. For a few years now, I've been looking at Jon Lester and seeing the vague silhouette of Andy Pettitte. This year, the resemblance has sharpened.

If this is the end, if even a sincere effort by Boston to re-acquire Lester is swamped by Chicago or Seattle or New York throwing dump trucks full of money at him, where does he stand in the team's history? Higher than one might expect, actually. He's ninth in team history in wins, behind only Mel Parnell among lefties. He's just outside the top ten in innings, but fourth in starts and strikeouts. His six postseason wins tie him with Curt Schilling for the most in franchise history. Boston, admittedly, is not a franchise known for its proud tradition of dominant pitching, but Lester has earned a spot among the best the Sox have had.

There's no such thing as a safe bet in baseball. The sport turns on so many weird hops and sudden wind gusts and tiny elbow tears that certainty is impossible. Jon Lester was about as close to a safe bet as it ever gets. His legacy as a Boston player is pretty clear by the numbers, and the Red Sox will of course miss his production and his direct value to the staff. That he's no longer with the team is immensely frustrating, even if the return was solid and the possibility of a comeback remains. If that's not rational, then so be it. The idea that one has to approach baseball rationally at all times is simply asinine.

In the end, Jon Lester's legacy in Boston is pretty simple: it was fun to watch him pitch. The rest is trivia.