Jon Lester, the end of the road, and asking why

The Red Sox season is over. The only thing left to do is find out who whether Jon Lester is staying or going.

Share All sharing options for: Jon Lester, the end of the road, and asking why

The Red Sox are going to trade Jon Lester. He's the best pitcher on the Red Sox, he wants to stay in Boston, he's been here his whole career, he's not old, he's only seeking a fair deal (according to reports anyway), and yet despite all that, the Red Sox are trying to get rid of him. Why?

I want to discuss the overall lack of a deal but first let’s address Lester's statement about being open to getting traded and then re-signing in Boston during free agency. If Jon Lester gets traded, he isn’t going to re-sign with the Red Sox. It’s not that that scenario has never occurred, because it has a very few times. It’s that compared to the number of times players on expiring contracts have been traded mid-season, it virtually never happens. More to the point, it won’t happen here. If the Red Sox trade Jon Lester it will be because they didn't want to give him the contract he feels he deserves. There is nothing about Lester reaching free agency after a half season with another organization that would make the Red Sox suddenly think, ‘Hey we should have given that guy a market rate deal!’ If they were going to do that, they would have done it already. Heck, if they were going to do it, they would have done it last off-season and saved a boatload of money.

Further, it doesn’t make any sense to send Lester off for prospects while entrusting another organization to take proper care of the guy and then pay him enough money to make him forget about the $160 million from the Cubs and $180 million from the Yankees and $165 million from the Dodgers. Remember, by acquiring a free agent to be, Lester’s next organization wouldn’t have incentive to do anything but wring as many innings out of Lester’s left arm as they could. So the Red Sox are going to watch Lester get abused by another team and then give him the market rate contract they've steadfastly refused to give him during the season? That’s not happening. It doesn’t make sense for the team, it’s not realistic for the player. I know what Lester has said, but remember when he talks that he’s still employed by the Boston Red Sox because he's a smart man and I'm sure he hasn't forgotten either.

It also ignores things like maybe Lester might want to re-sign with an organization that actually wanted him. Recall, in this scenario the Red Sox would be getting rid of Lester. They’d be saying, in effect, 'we don’t want you anymore,' while another organization would be saying 'we do want you.' That is something players notice. That is something Jon Lester will notice. Further still, it’s not Jon Lester’s job to improve the ranking of the Red Sox minor league system. That's Ben Cherington's job and there is no reason Lester would sign up to help him while jeopardizing his career in the process. 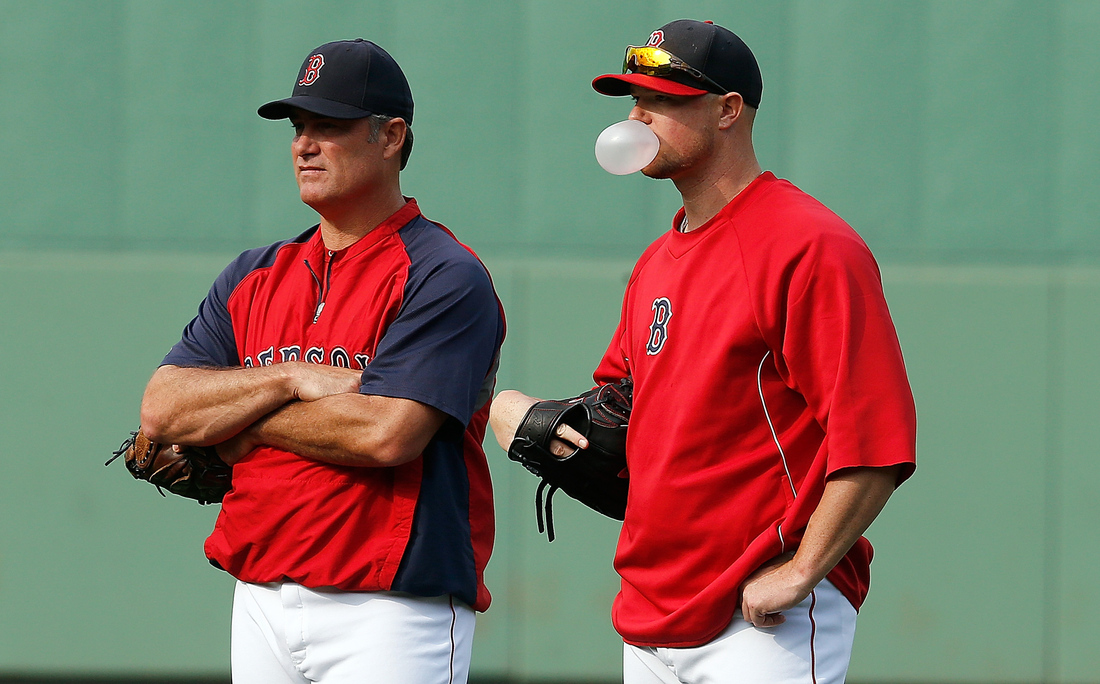 Lets get back to Lester re-signing in Boston. All the chips are lined up on the side of the Red Sox re-signing Jon Lester. Thanks to the Dodgers, Boston is not burdened with other players’ long-term expensive contracts. In 2016, two seasons from now, the Red Sox are committed to spending $13.37 million on two players. That’s it. That’s their entire commitment. And one of those is a $245,000 buy-out on Clay Buchholz’s $13 million team option. The Red Sox have so much roster flexibility it’s like they’ve enrolled in roster yoga. Roster-wise they can touch their shoulder blades with their knees. Since the group headed by John Henry bought the Red Sox, only once have they fielded a roster with a payroll below $120 million and that was the first full season they ran the team (2003) when their payroll came to $99 million.

The Red Sox don't have to spend money to win, but it sure helps, and you have to think they're not going to be content fielding a roster of pre-arbitration players and Dustin Pedroia. So they're going to spend money on someone. This isn’t an argument for acquiring bad contracts, but one that says large market teams can afford to take some risks. If this were the A's in this situation, of course, they'd trade Lester. If this were the Dodgers, of course, they'd have extended him already. The Red Sox are more prudent than the Dodgers and possess more means than the A's. They can take their time and then pay up when the time is right.

If Lester is going to be gone, swapping him out for a big bat would make all kinds of sense.

With Jon Lester standing alone atop the pitching market, the Red Sox almost have to trade their lefty ace.

Well, the time is right. Heck, it's been right for months. With no long term risk and prospects at just about every position who will, for the next three or so seasons, make virtually nothing, I'm not getting the hold-up. If the front office wants, they can field a Marlins-level team in two years. The farm system is that jacked. They have two of the best catching prospects in the minors in Blake Swihart (soon to be in Triple-A) and Christian Vazquez, now the Red Sox starting catcher. They have more prospects on the left side of the infield than they know what to do with (Deven Marrero, Garin Cecchini, the still-young Will Middlebrooks, and don’t forget Xander Bogaerts). They have a possibly overlooked first base prospect  with patience and power (Travis Shaw). They have guys who can seemingly play anywhere on the field (Brock Holt and Mookie Betts). They have more starting pitchers than their minor league system can contain, and they just added another in the Jake Peavy deal.

As our own Marc Normandin said to me recently, there is no such thing as too many prospects except there really is. The Red Sox don't need more prospects. They do need to compete and win next season. Jon Lester can help them do that better than anyone they can acquire in trade and more cheaply than anyone available to the team through trade or the free agent market as Lester won't cost players or draft picks to acquire. He is as likely to be healthy as a starter can be. He is as likely to be productive as a starter can be. He's not going to reset the market for starters if they sign him now. He's their best bet. And yet they are clearly looking to trade him.