The Red Sox could use Matt Kemp in their outfield. Not necessarily in 2014, where Boston isn't competing for a playoff spot any longer, but in the future where Kemp is still under contract. The Dodgers could use Jon Lester, and they could use him right now as they're in first place in the NL West, percentage points away from the Senior Circuit's best record: who better to add to a playoff rotation than a pitcher with Lester's history of postseason dominance?

Just because these individual ideas make sense does not mean they work well together. Lester only has two months left on his current deal -- plus whatever postseason time the Dodgers can work in -- before he's a free agent, but he's far and away the top option available at the trade deadline, especially now that the Rays are likely holding on to David Price. Getting a player with Kemp's question marks regarding performance and health as the centerpiece seems like it would be selling low on Lester. The Dodgers would be fine with that, obviously, but they likely wouldn't be able to buy low on Lester to begin with, as they would need to eat a massive portion of the $107 million Kemp is owed from 2015 through 2019 in order to entice the Red Sox to take him and part with their ace. The Sox and Dodgers might be playing with pieces for two different puzzles here.

More: Matt Kemp a target for Boston? (Just say no!)

You can ignore Kemp's raw slash numbers from the past couple years, as he plays in pitcher-friendly Dodger Stadium, a park that's damaged his numbers considerably. His OPS+ from 2013 onward is 112 and his 2014 mark is 118, making him a viable offensive contributor in left field, where his current glove work suggests he should be: the MLB average left fielder has a 729 OPS in 2014, whereas Kemp is at an unadjusted 752 since the start of 2013. His bat would be more than fine there, it would be productive, especially as a patient, right-handed hitter at Fenway Park. When David Ortiz retires in a year or two years (or whenever he finally hangs it up), Kemp would be able to slot in there if the Sox have other, better defensive options for left.

Advanced numbers suggest that the time is already now for that kind of shift, but they're based on a small sample, and Kemp has looked better in a corner than those small-sample figures suggest. The further he gets from his ankle injury and surgery, the better he could look out there, just like with current Red Sox shortstop Stephen Drew in his own post-surgery recovery from an ankle issue. 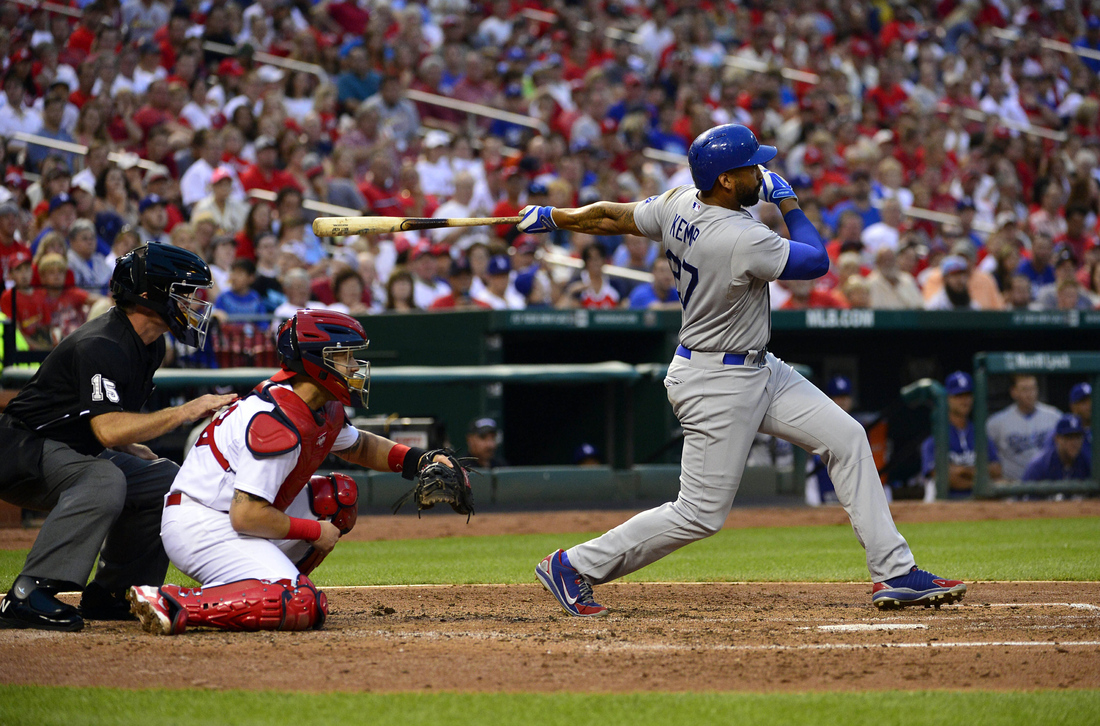 The budding superstar of a few years ago is likely gone forever thanks to the injuries that have piled up -- that ankle alone cost him his career in center, whether he or his agent, Dave Stewart, are aware of it or not -- but that doesn't mean he's useless going forward. If the Dodgers are eating at least half of his contract, suddenly Kemp can be something of a bargain as a well above-average corner outfield bat making somewhere around $10-11 million per year. Think of it as a longer Mike Napoli or Shane Victorino type deal, where a player is likely a dependable average contributor with upside for far more than that, but will be paid as if they're going to be average or a little worse than that. It might run for another five years, but the money would be low enough to make it fit that philosophy to a degree.

Would the Dodgers eat half of Kemp's remaining deal? Would they eat more than half of it? If the answer to either of those questions is yes, the Sox should listen, even if it costs them Lester. They shouldn't fall over themselves to do it, though, because you have to imagine someone besides the Dodgers is willing to make a deal for an upgrade as significant as Lester, who is a proven commodity in both the regular and postseason, and is in the midst of his best campaign to date. Knowing this, the Dodgers would likely have to give up even more, whether it be in the form of putting even more of Kemp's deal on their tab, or prospects.

Trade is welcome, but Peavy should still be missed

Jake Peavy had to go, but that doesn't mean we have to be happy to see the last of him in Boston.

The Red Sox may have to make another trade in a hurry, as Mike Carp has requested they move him to a contender. That might be easier said than done.

Prospects are probably what will kill this for the Dodgers. They aren't going to want to both pay for Kemp to play elsewhere and give up significant pieces of their future like Corey Seager or Julio Urias. They aren't going to include center fielder Joc Pederson in a Kemp deal, because Pederson is part of the reason they are willing to move Kemp in the first place: he might not be ready just yet, but he's the center fielder of the future because he can actually play center field, unlike Yasiel Puig, Andre Ethier, Kemp, or old friend Carl Crawford. Maybe some of their more B-level pieces can come east, like when Rubby De La Rosa and Allen Webster were sent to the Sox in 2012's Nick Punto deal, but that's still a high price for a team who could still realistically use Matt Kemp every day in their own corner instead of Ethier or Crawford.

The Red Sox have zero reason to acquire Matt Kemp unless the Dodgers are making it overly favorable for them to do so. The Dodgers probably don't have a great reason to make a Kemp trade that way for the Red Sox: Lester is amazing, but they will only have him for two months, and they wouldn't just be giving up a bunch of unproven kids for the rights to him. If they have to pay 60, 70, or an even higher percent of Kemp's deal to make it work, and throw in kids on top of that, then the Sox would obviously have to listen, but that doesn't mean the deal would make sense for both sides. And that's why this might end up being a discussion only, rather than reality.

Who knows for sure, though? The Dodgers have certainly surprised us with the impossible before, and their wallets are as deep as their desire to win is obvious. A postseason rotation of Clayton Kershaw, Zack Greinke, and Jon Lester might be worth whatever insanity gets you to that point; knowing this, the Red Sox will likely keep the phone lines open even past Thursday's deadline.