It took over a year, but Bradley is starting to put things together at the plate.

Jackie Bradley Jr.'s major league career has been rough. Over 122 games between 2013 and 2014, the center fielder has hit .217/.299/.318 while striking out over 27 percent of the time. His defense has been phenomenal, and his minor-league numbers suggest there's more to him offensively than this, so the Red Sox have continued to push him out there daily in spite of his struggles rather than demote him. This was the right decision from the start, given the nature of Bradley's struggles, but that's even more obvious now that the 24-year-old is starting to blossom at the plate.

It's a change that had to come in the majors. Bradley had already seen all he needed to of life in the minors, after batting .275/.374/.469 with just 20 percent strikeouts there in 80 2013 games. It was major-league pitching specifically that was giving him fits: at first, it was fastballs inside, but as he adjusted his stance to compensate for those, he left himself open to pitches on the outer part of the plate, especially so when those pitches were breaking balls or offspeed.

The adjustment in question was the closing of Bradley's stance, which, as Bradley stated by way of the Providence Journal's Tim Britton, led to him becoming pull-happy. Even in the minors, it was known that Bradley was a better overall hitter when he tried to slap singles and doubles around the entire field rather than focusing on his power and pulling the ball. This stance forced him to be less of a hitter than he was capable of, and as said, opened him up to struggling against pitches on the outer part of the plate: major-league pitchers, unlike their minor-league counterparts, can exploit that kind of weakness constantly.

Bradley opened his stance back up heading into a mid-June series with the Athletics, after batting .202/.289/.293 while striking out 31 percent of the time over 236 plate appearances and 66 games. In the 19 games since he reverted to his previous open stance, he's hit .308/.357/.369 in 70 plate appearances. That might not seem like much, but it's worth noting two things: he's been even better since July started, and during this entire stretch, Bradley has only struck out nine times, or 13 percent of the time. 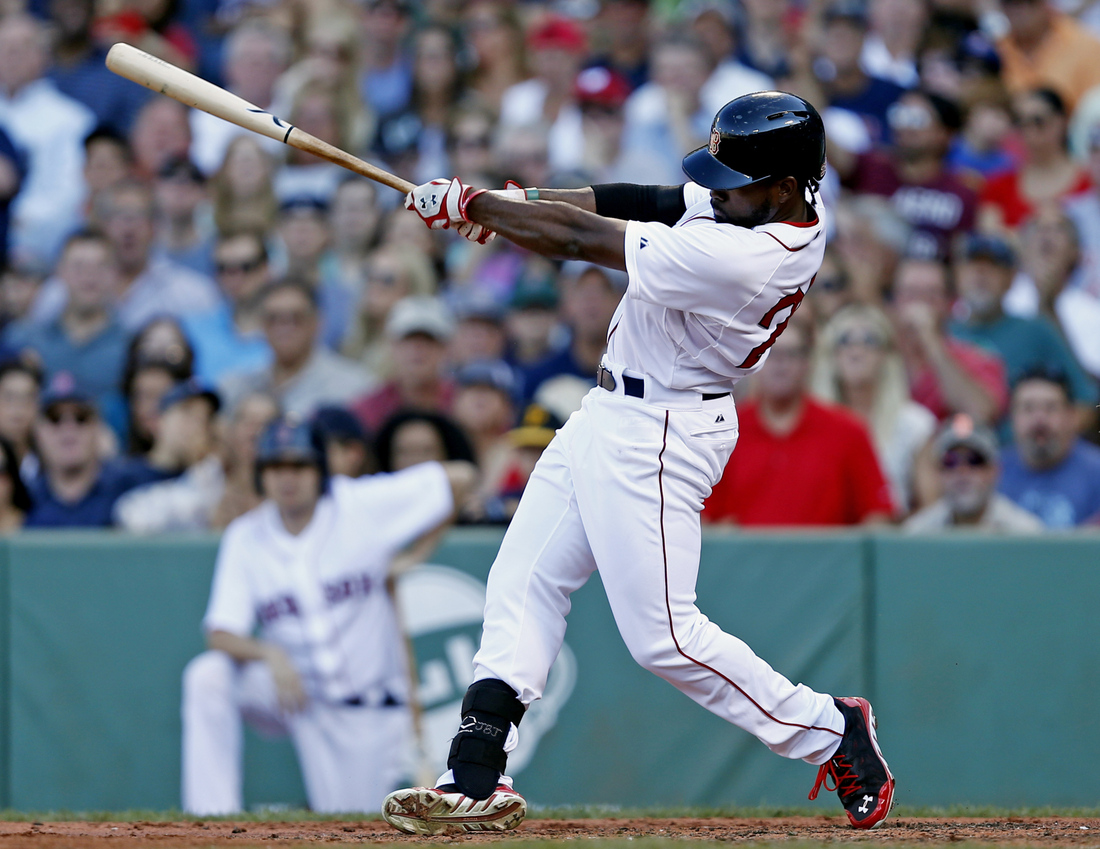 His entire issue since coming to the majors was that he would rarely see pitches to hit, because he could be exploited too easily. He's adjusted to pitches inside well enough now after seeing big-league hurlers throwing them at him for a year, but it was time to do something about the more recent -- and more troubling -- struggles against secondary stuff away. Bradley seems to have accomplished that goal: we have a clear start point from when the stance opened up, and a pronounced change in his strikeout rate since that moment. The sample is too small to say that this is the way it's going to be from now on, but for the first time since Bradley has been in the majors, there's legitimate hope for continued success from something other than the fact he hit in the minors.

"He's worked on his set-up for probably the last four or five weeks, from a high-hands set to a low-hands set to creating a more consistent path through the strike zone," manager John Farrell  said. "What we're definitely seeing is much less swing-and-miss. A couple hits last night are proof-positive of some of the work he's putting in. The open set-up just gives him a better chance to more readily see the ball."

You'd have to think that feeling has only strengthened since.

He's so, so good out there.

With Andrew Miller set to become a free agent this offseason, should the Red Sox look to trade him?

Plenty of players hit in the minors but then never do anything in the majors. Bradley was starting to look like a potential lost cause at the plate, at least as a starting center fielder, but sometimes, all a player needs is time. Bradley adjusted by going back to what had always worked for him professionally, and while it's come in fewer than 20 games, the success he's managed has been encouraging. With his tremendous defense, Bradley is going to be a valuable piece on the Red Sox even if he can only manage an OPS just over 700 -- after all, center field isn't much different offensively than third base or left field, two mid-level positions on the run production spectrum. If he can keep the strikeouts down and continue to improve at drawing walks while racking up singles and doubles, he'll be able to reach or even best the current 726 OPS league-average in center, and increase his importance to the Red Sox.

There is still a whole lot of season left, though, not enough to fully repair the damage done by the first few months of Bradley's 2014. That doesn't matter, however: what does matter is what Bradley's line looks like from mid-June through the end of the season, as that should help inform the Sox on just what they have in Bradley. If he continues to succeed from here on out, there is no question that he's the center fielder of 2015 and beyond. If this is nothing but a blip, though, then some questions about what Bradley's role should and even could be will need to be answered.

Luckily for the Sox, between Bradley's track record in the minors and his success -- as limited as it is -- after switching to the stance that brought him those minor-league numbers to begin with, there are plenty of reasons to believe that he's taken a legitimate step forward offensively. With the Red Sox as far back of both the AL East leader and a wild card spot as they are, they can afford to find out for sure after the All-Star break concludes.