Should Brock Holt end up in the Red Sox outfield?

Share All sharing options for: Should Brock Holt end up in the Red Sox outfield?

The Red Sox outfield is a mess. Alex Hassan, who was struggling at Triple-A Pawtucket and was meant to replace the injured Ryan Lavarnway on the bench mostly because there was no one else in-house, has made two starts in right field since Sunday. Regulars Jackie Bradley Jr. and Grady Sizemore are hitting a combined .213/.290/.321, and only one of them is playing high-quality defense. Shane Victorino has appeared in just 21 games due to multiple stints on the disabled list, Mike Carp is now out of the picture with a fractured foot, Daniel Nava has been not hitting, in the minors, or on the bench, and poor Jonny Gomes is just one platooning man. The Sox need answers for the outfield, and soon.

They might have a temporary answer already, but one they haven't had a chance to use yet. That's because he's been busy solving problems at other positions of need for 24 games in 2014. The Red Sox might want to give Brock Holt a shot in left field once Mike Napoli returns from the DL and can resume playing at first base. Hey, if the Sox think the 5-foot-10 utility infielder has a bat for first over any stretch of time, then the far less offensively rigorous left field shouldn't be a problem.

Holt's been on fire to begin 2014, batting .326/.371/.474 while spending more than half of his time as the Sox' leadoff hitter. It's a small sample, as is his career as a whole in the majors, but he's been about league-average overall with a .283/.332/.374 line over 74 games and 250 plate appearances. Given his productive minor-league numbers, you can probably expect at least that or a little better going forward, especially when you consider he seems to have taken a step forward at the plate this year at both Triple-A and in the bigs.

Yes, a .400 batting average on balls in play is a significant part of things, and it won't last, but Holt doesn't need to bat .321 to be useful to Boston: Red Sox left fielders are batting .242/.317/.365, and Holt can presumably outpace that. His arm is average at third, suggesting it should suffice in left -- especially in Fenway, with less distance his throws need to cover -- and he's a solid enough defender in the infield that he can likely man the position without hurting himself and Boston's lineup even further. 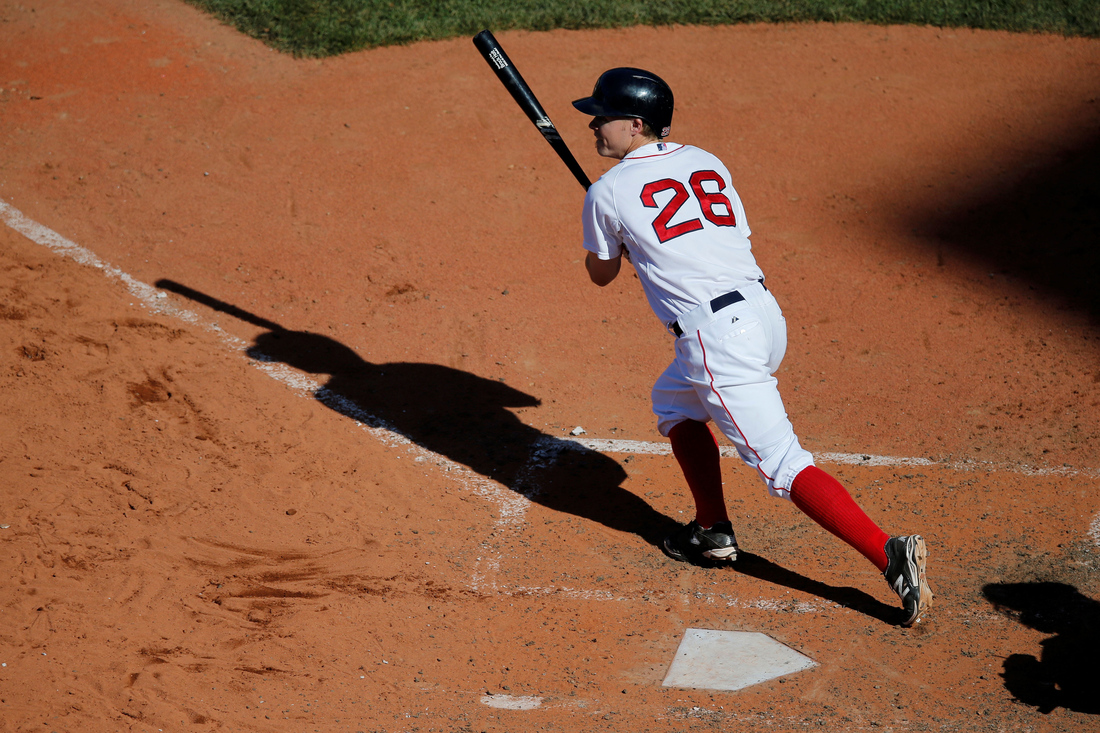 Holt in left would mean Sizemore remains in right while Victorino is out, which, according to Rob Bradford, should be at least a couple more weeks since Shanf isn't even set to begin a rehab assignment until next Thursday at the earliest. It would give the Sox a few more weeks to see if Holt deserves to stick around in the majors once the healthy players have returned, and more innings to see if Sizemore is capable of playing good, productive baseball for the first time since 2009. The only reason not to to put Holt in left would be if the Red Sox were finally returning to the days of Daniel Nava as the long end of a left field platoon, but given that the Sox and John Farrell have been using him more on the bench and for restructuring roster needs than as a regular, it's hard to know if that's going to happen.

Underneath the replacement-level results, there is evidence that Jackie Bradley Jr. is slowing figuring things out at the plate.

Taking Holt out of the lineup while he's mashing seems silly for a team desperate to get offense from their outfield. It wouldn't interfere with the Grady Sizemore Experiment, and it would even fit in with their idea that Daniel Nava shouldn't be playing right now, an idea that they have for some unexplained reason. It might end up crashing and burning, with Holt's bat returning to Earth, but look at who he's competing against: Holt could be bad and he'd still be an improvement over what's being rolled out there now.

And who knows, maybe Holt does keep on hitting, and the Sox find out that left is where the utility player should get regular playing time once Victorino returns, bringing an end to Sizemore's role as a starter. If that were to occur, they would have Napoli and Victorino back where they belong, both Xander Bogaerts and Stephen Drew in the same lineup, and a left fielder who was at least keeping the Sox from going backwards. It would be much easier to deal with the growing pains of Jackie Bradley Jr. if they could just get some offense from elsewhere, and the return of healthy players and a Holt in the outfield might be just the way to get there.