Underneath the replacement-level results, there is evidence that Jackie Bradley Jr. is slowing figuring things out at the plate.

Share All sharing options for: Jackie Bradley Jr. is struggling, but also adapting

Jacoby Ellsbury was bound to be a tough act to follow. In seven seasons with Boston, he hit .297/.350/.439 and produced 21 rWAR despite missing a season-and-a-half with injuries. Beyond his production, Ellsbury was simply an exciting player to watch. With the speed to be one of the game's top threats to steal a base (even home) and surprising line-drive power, he was a perfect leadoff man and among the most exciting offensive players on the club from 2007 to 2013. When the Red Sox decided to move on from Ellsbury, they placed the burden of filling his Mercury-like shoes squarely on top prospect Jackie Bradley Jr. Two months into the 2014 season, the transition has been difficult to watch, to say the least.

It would have been entirely unfair to expect a 24-year old prospect with just 107 brutal plate appearances at the major league level to step in and match the kind of production the Red Sox had gotten from a star like Ellsbury, but something more than the replacement-level performance he has turned in thus far was not unreasonable to hope for. Bradley hit .275/.374/.469 in a little more than half a season worth of plate appearances at Triple-A Pawtucket last year and he cracked the top 25 of Baseball America's 100 top prospects list heading into 2014. In their prospect handbook, Baseball America's staff wrote that Bradley was "capable of replacing Jacoby Ellsbury as the everyday center fielder in 2014 and could grow into an above-average regular. At worse, his defense suggests a floor of a valuable part-time outfielder." Sadly, to this point, we have seen all floor and no hint of any such above-average ceiling from Bradley.

So, what has gone wrong for him so far? And more importantly, are his issues at the plate something that he can overcome?

To answer these questions, the first place I turned was Brooks Baseball. The first thing I saw there was this:

Jackie Bradley has seen 1,155 pitches that have been tracked by the PITCHf/x system between 2013 and 2014, all of them occuring in the MLB Regular Season.

Brooks Baseball's current assessment reads like the plot of some spring break-slasher flick.  Things start off wonderfully: "exceptionally good eye!", "exceptionally patient!", "league average likelihood to swing and miss!" We're all going to get laid! Then, it descends into a spiral of madness and horror that cannot be viewed without at least partial hand-to-eye obstruction taking place.

There are some small sample considerations to keep in mind here (just 69 off speed pitches seen, for example), but that doesn't mean this info is as meaningless as the third-act carnage in the latest Saw rip-off. When Derek Carty looked at the rate at when statistics stabilize at Baseball Prospectus back in 2011, he found that strikeout rate generally "stabilizes after 100 PA-IBB-HBP." That means Bradley's ugly 29 percent strikeout rate is not just a cruel twist of fate here to leave you squeamish. It is a real issue for the 24-year-old, at this point. If there is a silver lining in the stabilization rates, it is that his 10 percent walk rate is just as stable. Both rates are significantly worse than what his minor league track record might have led us to hope for, but this is the highest level and Bradley is just 295 plate appearances into his career.

The Brooks Baseball note above provides us with the details of why Bradley is having so much trouble at the plate right now and Carty's work suggests that despite the small sample size, his biggest flaw -- his strikeout rate -- isn't just noise, but before you give in to despair and begin reading this with a Werner Herzog-style voice-over, you might want to take a look at his projections (care of Fangraphs):

No one is calling for a Dustin-Pedroia-in-2007 turnaround, but a nearly six percent drop in strikeout rate (per Steamer) and across the board improvement is nothing to sneer at. Center fielders are currently averaging a 98 wRC+ so the more optimistic of these two projections has Bradley rebounding to within striking distance of that type of production. Even ZiPS less-optimistic numbers are anticipating a 24 percent improvement from his current rates. If nothing else, these numbers invite us to at least consider a bit of cautious optimism in Bradley's case.

Of course, we still have to consider exactly what is going wrong right now. Will Bradley's inability to judge breaking and off-speed pitches forever cap his offensive ceiling or is this just part of his major league learning curve? Here again, I believe a bit of cautious optimism is called for.

Although Bradley's numbers are just about equally as terrible as what he did in his limited exposure to the show at the start of 2013, comparing his struggles then to what he is doing now shows us some signs of his ability to make the kind of adjustments it will take to fix the problems outlined by Brooks Baseball.

Breaking and off-speed stuff might be giving him issues now, but in 2013, he was getting beat by inside fastballs (care of Brooks Baseball): 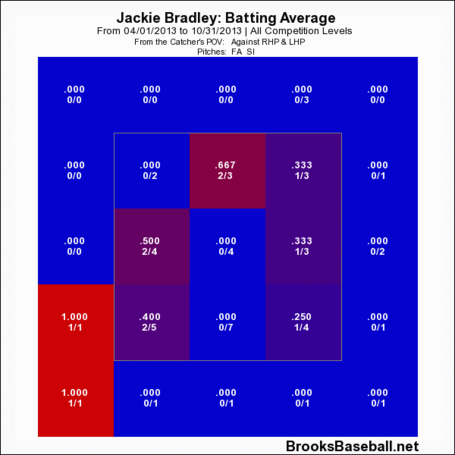 Pitchers threw Bradley fastballs (excluding cutters) to one of the 10 zones inside nearly 40 percent of the time in 2013 and he hit a combined .157 on such pitches. This season, he appears to have made a significant improvement there: 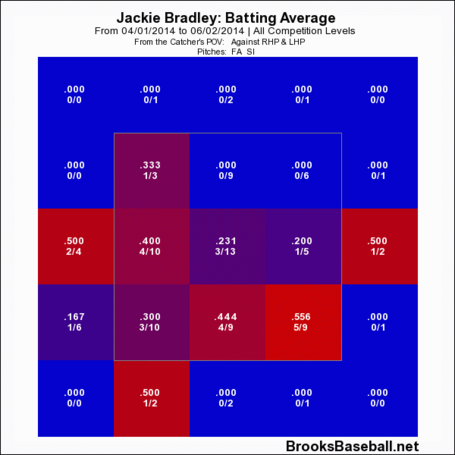 Pitchers have thrown him fewer pitches inside and Bradley has been more aggressive against inside pitches that fall inside and in the strikezone, and yet, his batting average on these pitches is up to .269. He is still vulnerable up-and-in but with his strong eye for fastballs off the plate and his best slugging numbers coming on pitches low-and-in, pitchers have moved on and are now coming inside just 26 percent of the time. Looking at the specific issues he is facing right now, it is easy to see him making a similar correction in the near future.

Here is his swing rate across the zone on fastballs this season: 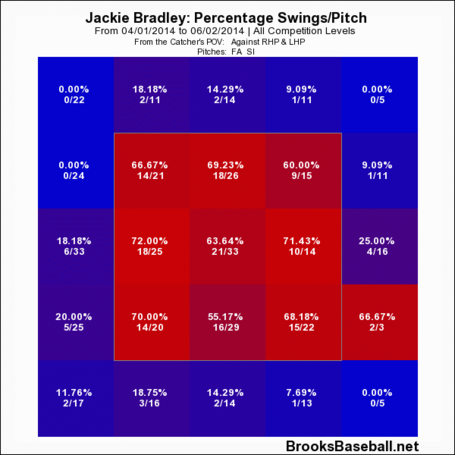 And here it is against breaking and off-speed pitches (including cutters): 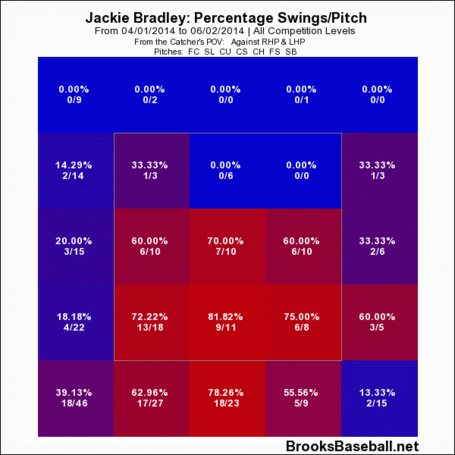 As you might expect, all those swings on off-speed and breaking pitches down low are not resulting in many hits. Pitchers have learned that this season the best way to beat Jackie Bradley Jr. is to drop a breaking ball or change below the zone. Knowing that, pitchers have started throwing more breaking and off-speed pitches there as the season has gone on. Even though Bradley hasn't completely figured out what to do with these pitches (he has recorded a hit on just one such pitch since the start of May), he is at least starting to recognize which pitches he can lay off of.

Here are his swing rates on breaking and off-speed pitches (including cutters) in April: 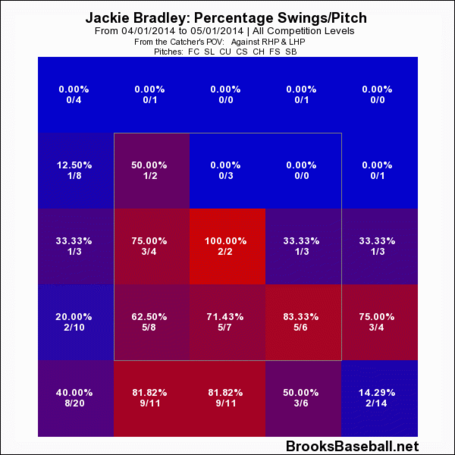 And here are the same rates from May on: 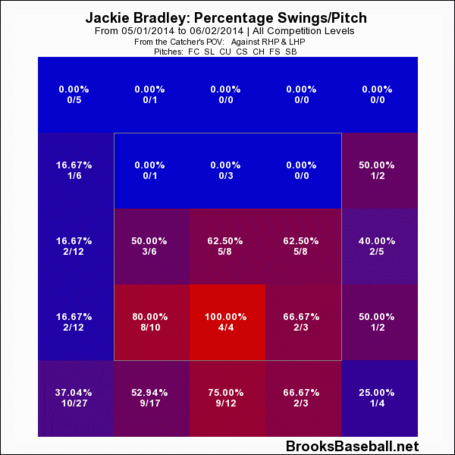 As pitchers have tried dropping the ball out of the zone more, Bradley seems to have gained a slightly better understanding of which pitches he should take. With his best power area lying near the bottom of the zone, it may only be a matter of time before he runs into some mistakes he can drive and pitchers are forced to revise their approach again. This isn't conclusive evidence that his pitch recognition is coming around, but it does at least suggest that the process might be under way.

The same write-up from Baseball America I referenced earlier also contained this line about Bradley: "Evaluators are convinced his aptitude, pitch recognition, and strikezone awareness will permit him to make the necessary adjustments." That sounds rather prophetic after looking at the two different sets of numbers above. Bradley did not arrive at the major league level as the fully-formed replacement to Jacoby Ellsbury, and the early results have been hard to stomach, but under the poor numbers there seems to be exactly the kind of adjustment process the experts Baseball America spoke with eluded to. That is a fairly good reason to hold out hope for the future, even in the face of Bradley's early struggles.