The Red Sox should not consider trading Jon Lester

With the possibility of Boston becoming sellers inching closer to reality, Jon Lester trade rumors will surely start to heat up. It is a situation they need to avoid.

Share All sharing options for: The Red Sox should not consider trading Jon Lester

With each passing day, the Red Sox's playoff hopes seem to be growing more and more bleak. It's hard to say they're completely out of it given the margin between them and the second wild card, but as Ben Buchanan points out, the team is further out of contention than it may seem. If things continue like this for the next few weeks, it isn't hard at all to envision a scenario in which Boston becomes a true seller at the trade deadline, a situation this team has not found itself in in recent memory. Even in 2012, the blow up didn't come until well after the deadline.

Although the struggles cannot be denied, they do have some pieces that can be flipped if it comes to it. Most notably there is Koji Uehara, Stephen Drew, Jonny Gomes, Jake Peavy, and possibly guys like John Lackey and Shane Victorino. If this ends up happening, another name who will be thrown out time and time again will be Jon Lester. The impending free agent may seem like an obvious choice to deal. Why not try and get a few prospects for the pitcher instead of just getting one draft pick? Well, while it may seem like a good idea at first, it's really a move that the Red Sox absolutely cannot make.

Lester has been fantastic so far in 2014, continuing a run that started a year ago, and has placed himself firmly into the second-tier of major-league pitchers. He's never going to be a Clayton Kershaw or Felix Hernandez, but he has still proven to be an incredibly valuable pitcher. After a completely dominant 2013 playoff run, the 30-year-old southpaw has continued that momentum by putting up numbers that would make for the best season of his career extrapolated over an entire season. In his first 16 starts of 2014, Lester has thrown 106 innings, with a 25 percent strikeout rate, a 6.2 percent walk rate, a 3.14 ERA and a 2.84 FIP.

The Sox trade deadline: Don't call it a teardown

It's been here for years.

The Sox trade deadline: Don't call it a teardown

All of those numbers would represent career-bests except for the K-rate, which would be his third best of his career, and best since 2010. It's all coming with his same consistency and durability, too, as he is once again on pace to top 200 innings for the third straight year, and sixth time in the last seven seasons. With those kind of numbers, that would make him a very valuable trade chip. However, that also makes him a very valuable guy for the Red Sox, and much more valuable than anything they'd realistically get in any trade.

The basic reason that Boston needs to do everything in their power to keep Lester is that this isn't going to be a complete blowup. This isn't the kind of situation that teams like the Astros, Cubs and Twins find themselves in. The Red Sox should have no problem reloading and retooling and putting themselves right back in contention in 2015. Lester should be a major part of this. For all of the young arms in the organization, none of them gives them the top-of-the-rotation stability that Lester does. Henry Owens is probably the closest prospect to that profile, but even he projects more towards the back of the rotation than the front. While it's easy to say that they should trade the two-time World Series champion now and just sign him back in the winter, there is a reason that rarely happens. By keeping him through the season, they have a much longer window to negotiate a new deal, with the added benefit that there are no other teams involved at this point. If they let him walk, they'd have to go into free agency to replace him. Max Scherzer would be the only clear upgrade, and would be much more expensive. 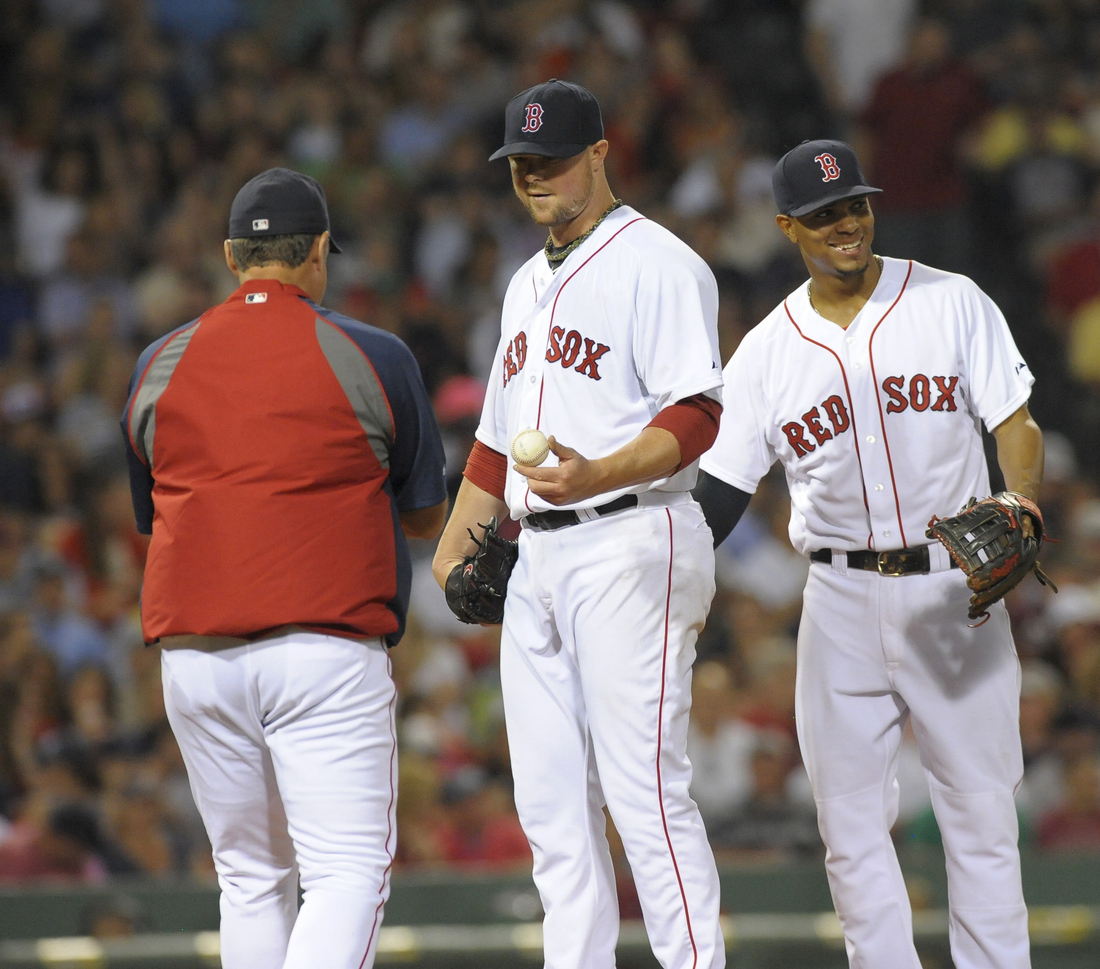 It's true that the more Lester pitches like this, the more expensive he's going to get, but it's not as if the Red Sox don't have the money. If they end up keeping Lackey on his current contract, he'll only be paid the league-minimum. That excess of young arms I mentioned is a big part of this too. If the back of the rotation is filled with players on rookie deals, they can afford to overpay at the front-end. Typically, the end of a rotation is filled with veterans eating a significant portion of the payroll. The 2015 Red Sox, though, could theoretically have Lackey, Workman and De La Rosa filling three spots for a grand total of $1.5 million, with league-minimum pitchers Allen Webster, Anthony Ranaudo, Matt Barnes and Henry Owens serving as cheap depth. While none of these guys will be able to fill Lester's shoes if he were to leave, they are the biggest reason why it shouldn't be a huge problem to keep him around. It's not often a team is lucky enough to have so much cheap young talent ready to contribute at the same time, saving money to spend elsewhere. It's a situation the front office has to take advantage of.

Red Sox are further back than it seems

Red Sox are further back than it seems

With the Red Sox inching closer and closer to a situation in which the wind up as sellers, it's tempting to want to trade away the best upcoming free agent on the roster. In some teams' cases, it may well be the prudent thing to do. The Red Sox, though, are not in the middle of a long rebuild, and still need pieces to compete in 2015, a season in which Lester should be a huge piece. All of the focus needs to be on re-signing their ace and keeping here for essentially the rest of his career, a goal that becomes much more difficult if he is shipped out of town in a few weeks. For all of the arms in Boston's system, they don't have a true top-of-the-rotation talent, and Clay Buchholz is yet to show the consistency and durability to fill that role. In short, Jon Lester just cannot be traded under any circumstance short of him declaring a sudden refusal to sign an extension.