The Red Sox have too many pitchers

Not too many good pitchers, but absolutely too many pitchers for their own good.

Share All sharing options for: The Red Sox have too many pitchers

This isn't to say the Red Sox have done something wrong. Amassing the sheer volume of pitching depth they have in both the majors and the upper levels of the minors was the right thing to do, as was sticking with the group of five starting pitchers that they did to open the 2014 season in the bigs. June is almost at its end, though, and the Red Sox are well under .500 and six games back of the closest playoff spot trailing eight other teams in the American League for a wild card Pitching prospects have made progress, big-league pitchers have stalled out, and failure to recognize that and shuffle things around to compensate will just make for a waste of time at both levels.

More: Brandon Workman must stay in the Red Sox rotation

It's not time to give up on the season when things are still that superficially close, but they're also far away enough to err on the side of positive 2015 developments. Especially when those development can also help in the present, and their implications reach much further than just unclogging a couple of spots at the top.

There are two major issues at play here. The first is that there is the possibility for major turnover in the rotation from 2014 to 2015, and the second is a backlog of pitching prospects stuck at levels they no longer should be at. They're connected, too, as figuring out ways to solve the former will automatically fix the latter. Jon Lester, as of now, is a free agent after the 2014 season. Jake Peavy will either leave as a free agent or retire, and John Lackey has openly contemplated hanging it up himself rather than pitch for the league minimum in 2015. Clay Buchholz and Felix Doubront are still guaranteed to be around, but given Buchholz's health problems combined with his tendency to lose what's best about him for months at a time, and Doubront's inability to be productive for more than a few months in a row, that's not much of a rotation to build on. So, the Red Sox are looking for something between one and three new starting pitchers for 2015, and if things go completely south for Buchholz and Doubront the rest of the year, maybe more than that. 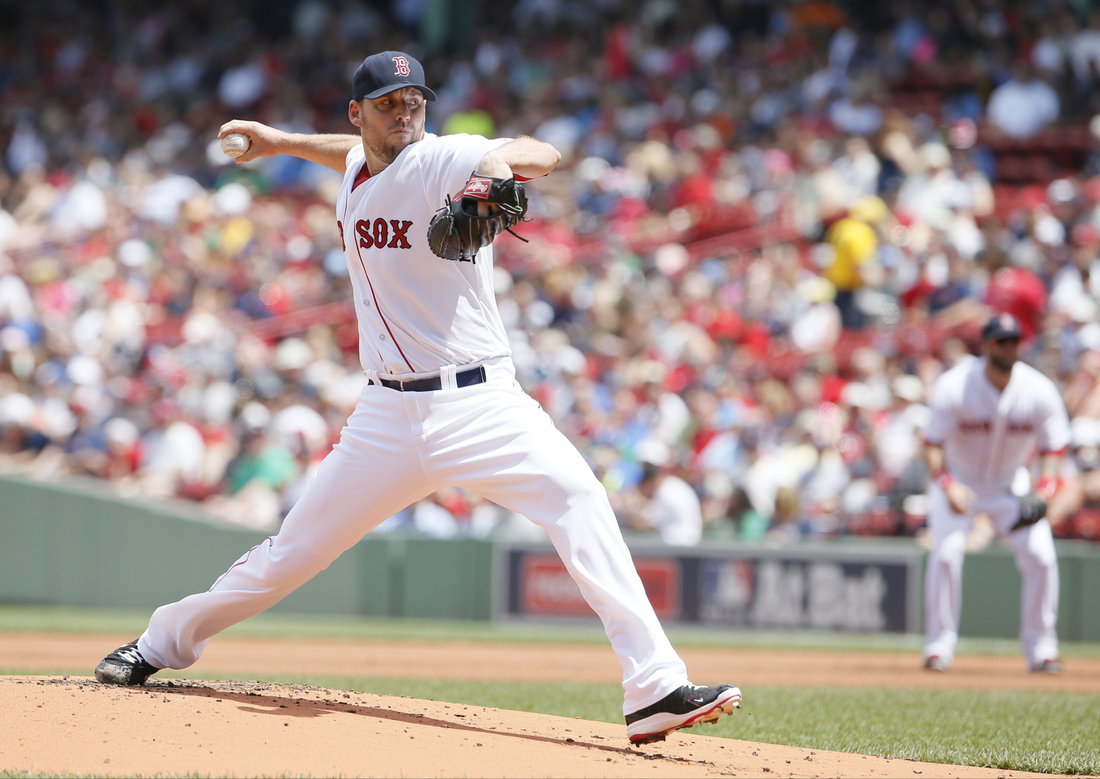 Now, Lackey could be posturing in order to leverage a new deal from the Red Sox that keeps him around for a couple more seasons, and Lester could still re-sign. Buchholz's situation also isn't as dire if Boston can fill in the blanks a bit so they aren't relying on him quite as much. It's hard to be too optimistic about Doubront at this point, though, as he's 26, has never even come near 200 innings, has seen his velocity dip, and has an 89 ERA+ dating back to 2012. Then there's Peavy, who still has his moments, but is trying to get by almost entirely on experience and veteran guile rather than on stuff at this late, baseball-slinging stage of his career.

Jake Peavy is the Red Sox starter who needs to go

Clay Buchholz and Felix Doubront have caught the most flack in Boston's rotation this season, but Jake Peavy is the guy to really worry about.

The day until Mookie Betts' major league debut inches closer by the minute. Despite their need in the outfield, the Red Sox should not call up Betts right now.

Figuring out how to get Buchholz back to where he can be is key to the Sox' success both now and later, so shifting him out of the rotation makes no sense. The Sox shouldn't look to trade Lester or Lackey, either, since they could re-sign either and have them as parts of future talented Boston squads. That leaves Peavy and Doubront as the movable pieces. Peavy is someone who could be traded to an NL squad in order to get him facing easier lineups, as Matt Collins discussed earlier. Doubront, though, isn't a good trade candidate right now in spite of his remaining team control and low cost, because he just hasn't been pitching well. Plus, he's a pitcher who still has talent, and can serve as depth in the Sox system -- he should be bumped to the bullpen, replacing veteran lefty Chris Capuano, who has served his initial purpose at this point and could be designated for assignment easily.

The combination of these moves would open up two spots, presumably for Brandon Workman and Rubby De La Rosa. Both of these pitchers have questions surrounding them regarding their ability to start long-term in the majors, and figuring out the answer to those questions sooner than later should be high on the priority list. This is especially true when you consider that they aren't even the only two arms at Triple-A Pawtucket who are big-league ready: Allen Webster should also see time in the bigs after nearly 200 innings at Triple-A, and Anthony Ranaudo isn't there yet, but his 1.83 ERA over his last 12 starts and 69 innings suggests he will be soon. Both of these arms also have questions about their long-term viability as starters, questions that won't be answered int he International League.

Putting Workman and De La Rosa in the Red Sox' rotation could help keep the big-league pitching productive from top to bottom if their recent success is any indication, while simultaneously helping to set the Sox up for a very different 2015 alignment. The bullpen would likely see improvement as well thanks to Doubront, who still has the stuff to be a successful major-league pitcher, but maybe just needs a new role to show that in. If Workman and/or De La Rosa end up exposed and looking like future relievers rather than rotation mainstays, well, the Sox needed to find out if that was the case for these two at some point, and while down in the standings already mid-season isn't the worst place for discovery.

Shifting Workman and De La Rosa to the majors permanently would open up a pair of spots in Triple-A for Henry Owens and Brian Johnson. Owens now owns a 1.93 ERA over 116 innings at Double-A, with over 10 strikeouts per nine and fewer than six hits per nine allowed. He needs a new challenge, as he already adjusted to the ever-so-brief one that the Eastern League provided him. As for Johnson, he's only thrown 54 innings at the level, but he's always been a polished arm who was expected to make his way up the ladder with haste. He has 3.4 times as many strikeouts as walks at Double-A, a 1.66 ERA, and has had no trouble getting strikes looking or inducing them thanks to his quality command of all of his offerings. The 2012 first-round pick has made aggressive jumps like this before, too, as he threw just 69 innings in Low-A and all of 36 for High-A. 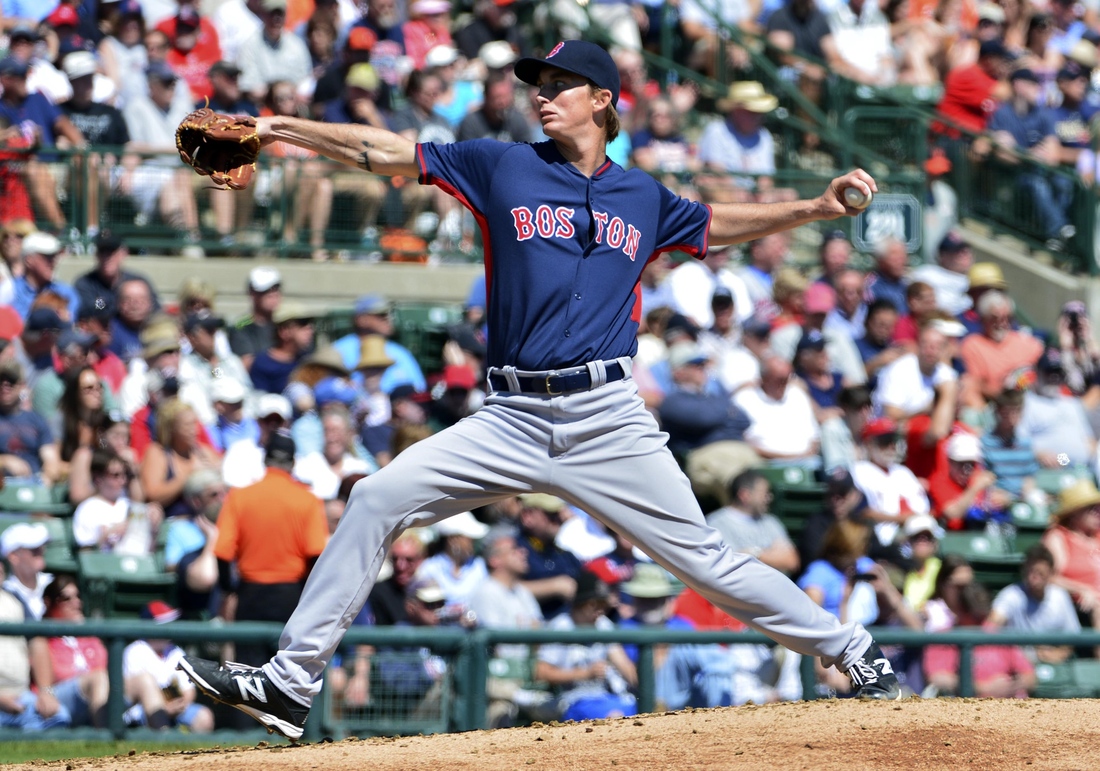 Even if Johnson isn't the guy the Sox move, not just yet anyway, there is Keith Couch, who doesn't have the same prospect profile but similarly has nowhere to go at present. He's thrown over 200 innings at Double-A over the last two seasons, and his tendency to induce grounders and throw strikes means he has an outside shot at being a back-end big-league starter someday. Couch is also eligible for the Rule 5 draft, so giving him a bump to Triple-A to see how he does and possibly improve his trade value before that point isn't the worst idea.

Moving two of these pitchers to Pawtucket is important not just for them, but also for the prospects behind them. Justin Haley, a 6-foot-5 2012 draft pick, is going to need a promotion soon, as he's produced a 2.54 ERA for High-A Salem in his 14 games, and has dispelled with the walks issue that kept him at Greenville for all of 2013. Corey Littrell, a 2013 selection, doesn't need to be bumped up just yet, but besides a pair of recent poor starts, he's excelled at High-A: As he's 22 and a fairly polished college arm, bumping him to Double-A at some point this summer wouldn't be the worst thing for the same reasons aggressively promoting Johnson was a solid plan.

Before any of this can happen, though, before the Sox can start to challenge their prospects and bring their development to the next step, they need to make room in Boston. The Sox have too many pitchers for too few spots at present, but with a trade here and a bullpen assignment there, they can improve their chances both now and in the future. It's difficult to make moves that satisfy both the now and later in baseball, but the Sox have an opportunity to do just that.