Jake Peavy is the Red Sox starter who needs to go

Clay Buchholz and Felix Doubront have caught the most flack in Boston's rotation this season, but Jake Peavy is the guy to really worry about.

Share All sharing options for: Jake Peavy is the Red Sox starter who needs to go

Considering as bad as the Red Sox have been this year, it's amazing that they still have realistic hopes for making the playoffs. Yes, there are six teams in front of them for the second wild card. Yes, they are quickly falling into a deeper hole for the division. Yes, this is as mediocre of an American League as I can remember. Still, considering how bad this team has played, it's amazing it's even a conversation.

The reason for this has been that their pitching has been solid. The bullpen has been mostly fantastic, and the rotation has been fine, especially as of late. Said rotation is led by Jon Lester and John Lackey, who continue to be as solid as just about any one-two punch in the game (Monday night's game notwithstanding), and will be a big reason if/when the Red Sox climb back into this race. The last three spots have been shaky and inconsistent this year, but lately have been much better. Of course, a big part of that has been the performances of Brandon Workman and Rubby De La Rosa. Both of those young pitchers will likely be taken out of the rotation with the returns of Felix Doubront and Clay Buchholz, two pitchers who cause extreme worry among many Red Sox fans. There are plenty of valid reasons for this, but the truth is that Jake Peavy is really the guy who is the most concerning on Boston's pitching staff.

By almost any method you use for evaluation, Peavy is having the one of the worst seasons of his career, if not the absolute worst. His 4.52 ERA is his worst since 2011, as his is 89 ERA+. His 17.5 percent strikeout rate is the worst of his career, and his walk and home run rates are worse than they've ever been since the second year of his career. All totaled up, he's in possession of a 4.73 FIP, also his worst mark since his second MLB season. To put it bluntly, he's been bad, and as bad as he's ever been. Just watching the 33-year-old pitch it's clear he just doesn't have it right now. It's not even necessary to look at the numbers. Obviously, that's not what's in contention though. We all know he's been bad. What's up for debate is whether or not he's the one to worry the most about.

Doubront is a big, youngish lefty who has always had the feel of someone who is right on the cusp of being a solid middle-of-the-rotation arm who can consistently help the team win. To this point, though, he hasn't made that leap, and it's starting to look like he never will. However, what he has been in the past is a completely reliable back-end starter, a piece that isn't overly sexy, but still valuable for a contending team. In 2014, he hasn't even been that. He's made ten starts this season, and has a 5.19 ERA with a 5.25 FIP. His strikeouts are down and his walks and home runs have gone up. The difference between him and Peavy, though, is his age. Personally, I've never been a huge fan of the 26-year-old, but it's impossible to deny he has more upside than Peavy. His trip to the disabled list gives him some benefit of the doubt on why he's performed as poorly as he has. Even putting that aside, though, he's seven years younger than Peavy, and while Doubront is just entering his prime, Peavy is ending it. If we're betting on which one of these guys will bounce back this year, my money is going on the former. 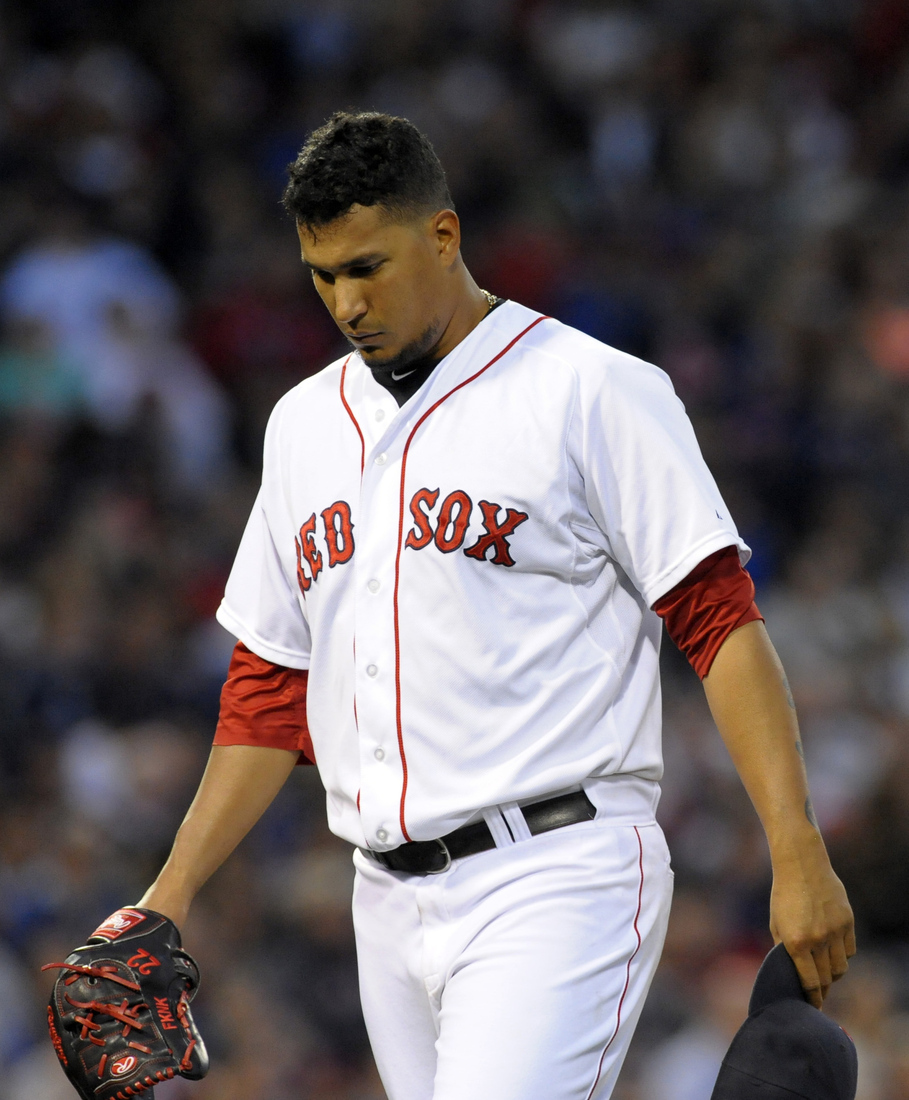 Buchholz is something of a controversial figure among Red Sox fans. His career has made him into love-him-or-hate-him type of player. Both sides of the argument have portions of career that they can point to in order to prove their point of view. While I'm certainly part of the first group, I think it's fair to expect both sides to agree that there is much more hope for him than Peavy. Buchholz has definitely been horrendous this year, with a 7.02 ERA to go with a .384 batting average on balls in play that is more due to his poor pitching than it is to bad luck, and a 4.85 FIP. He is inducing less ground balls than ever, and giving up more home runs.

Still, with all of that being said, he's only a year removed from being one of the truly dominant pitchers in the league. At this point in the year he had just hit the disabled list after starting the year with a 1.71 ERA and an 81/29 K/BB ratio in 84-1/3 innings. Even in his four regular season starts after he returned from injury he had a 1.88 ERA in 24 innings. It's not like that was a complete anomaly either, as he was outstanding in 2010, and had a good 2011. Peavy hasn't been as dominant as Buchholz has shown he can be since 2008 when he was pitching in San Diego, and his stuff is nowhere near on the level of Buchholz's. Of course, there's also the age factor, since Buchholz is four years younger than Peavy. Even the injuries shouldn't affect things as much, since Peavy has never really been a model of health in his career either.

So, with all of this being said, what are the Red Sox supposed to do about this? In an ideal world, at least one of Workman and De La Rosa stays in the rotation, but that only happens if one of the current starters is removed from the rotation. For all of the reasons above, Peavy should be the one to move. And while he's been bad and is trending downwards, he could still be a guy who could be seen as a potential help for a pitching-hungry contender, especially in the National League. Recently, it came to light that the surprisingly contending Miami Marlins could be looking to trade for rotation help. That seems like a perfect fit for Peavy. He is a free agent after the season, so they wouldn't be on the hook for long-term salary, and the nature of their league combined with their spacious home field would help his home run tendencies.

The return wouldn't be huge, but it would help the Sox now and make room for younger players. However they can do it, the Red Sox need to try to make room for Workman and/or De La Rosa in the rotation. If only one guy is leaving the current rotation, it's shouldn't be Doubront or Buchholz, but instead Jake Peavy.