They could use the outfield help.

Yasmani Tomas was one of the top remaining players in Cuba, but that's no longer the case. According to Baseball America's Ben Badler, Tomas has defected from Cuba, the first step towards signing with a Major League Baseball team. Like with Jose Abreu, Yasiel Puig, Yoenis Cespedes, and others before them, Tomas will likely bring in millions when he's finally able to ink a deal, and might also be big-league ready at that moment.

Tomas is a center fielder, but Badler states that he would be a corner outfielder in the majors. He's 23 years old, and has 70 raw power on the 20-80 scouting scale: this is the moment where you realize Tomas would fit in well with the Red Sox.

The outfield might be Boston's weakest spot in the upper levels of their otherwise strong farm system. Jackie Bradley Jr. is a phenomenal defensive presence in center field who is slowly seeing gains at the plate, and Mookie Betts is in the middle of his transition from second base, where he's blocked by Dustin Pedroia, to the outfield, where he is blocked by no one. After that, you're looking at bench bats like Bryce Brentz, projects like Henry Ramos, or way down the line at the still-teenaged Manuel Margot down in Low-A. 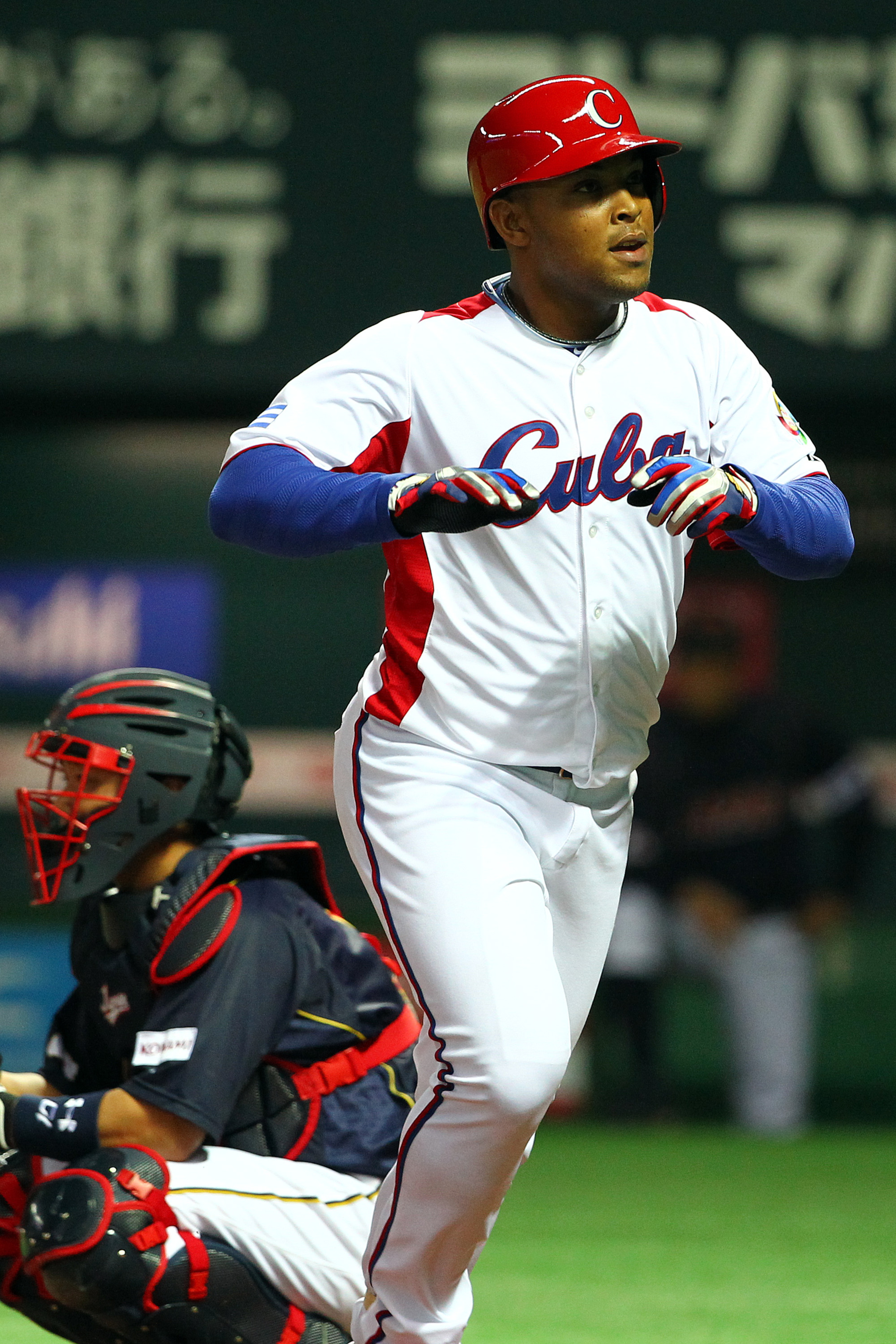 Adding someone like Tomas, whose power in Cuba was dwarfed only by Alfredo Despaigne according to Badler, would make all kinds of sense for the Sox and their outfield situation. Adding Tomas, who is certainly not a finished product due to swing-and-miss in his game but has the tools, to a young core that already has Xander Bogaerts, Betts, Bradley, Garin Cecchini, Blake Swihart, and a plethora of pitching prospects is a tantalizing proposition, and one the Red Sox front office is likely to consider. The Sox have made a run at a few recent Cuban free agents, as, if they have five (previously three) years of experience in international leagues and are at least 23 years old, they won't count against international spending limits: Tomas is 23 and has five seasons in Serie Nacional, qualifying him for buckets of Boston's money.

Badler reports that there is a chance Tomas could slot right into a major-league lineup, but might need some time at Triple-A first. Either way, the Sox could have room for him if they desired, as Pawtucket's outfield won't be any less barren in 2015, and 2014 has reminded us that alternatives to Daniel Nava and Shane Victorino are very well things that Boston might have need for. It also likely wouldn't even come up until 2015 anyway, as Badler also reminds that Tomas needs to establish residency elsewhere, jump through various legal hoops, and have Baseball recognize him as a free agent before he can sign anywhere.

What he'll be looking for in a contract at this stage is unknown, but the Red Sox are on the record as enjoying players who will only cost them money. With right-handed power at such a premium league-wide that Boston wants to keep trying with Will Middlebrooks, you can see where someone like Tomas would intrigue them.