Brandon Workman must stay in the Red Sox rotation

The Red Sox have some tough decisions coming up as their rotation grows more and more crowded. When the dust settles, however, Brandon Workman should remain standing.

Share All sharing options for: Brandon Workman must stay in the Red Sox rotation

Felix Doubront is on his way back to the Red Sox to pitch Friday night's game against the Athletics, and Clay Buchholz is set to follow not too far behind. With Jon Lester, John Lackey, Jake Peavy, Brandon Workman, and Rubby De La Rosa already filling up Boston's rotation, the Red Sox will have some tough decisions to make when it comes to opening up space for their returning starters.

The most obvious move will likely come tomorrow. Rubby De La Rosa will make his scheduled start against Oaklnad, then quickly be shuffled off to Triple-A Pawtucket, allowing the Red Sox to get their bench back up to full strength, such as it is. De La Rosa has been very interesting in his time with the team--his changeup can be out-of-this-world good--but he's still got work to do if he wants to be a major league starter, mainly regarding consistency with his fastball.

That still leaves one more rotation spot to open up, however. And that means one of Jake Peavy or Brandon Workman needs to be removed from the rotation. And, crazy though it may seem given the sheer weight of the names involved, it's getting clearer by the day that it should be Peavy who leaves and Workman who stays.

As with all personnel decisions these days, we have to consider two scenarios: one in which the Red Sox are legitimate contenders, and one in which their focus in on 2015. We might not know for sure which is the case until the deadline is past (I would contend that there is little chance the Red Sox buy if they don't see themselves as contenders, and little chance the Red Sox can contend with teams strengthened at the deadline without buying themselves). The good news here is that I'm pretty sure in either situation, Brandon Workman is the better fit.

Let's start with the happier scenario, in which the Red Sox are legitimately fighting for a playoff spot. There's little denying that, at least at the moment, Brandon Workman is pitching better than Jake Peavy. In this most recent stint of starting, Workman has thrown 28 innings of 3.21 ERA baseball, holding opponents to a .567 OPS. In that same stretch, Peavy has a 4.28 ERA in 33.2 innings, allowing a .754 OPS against. Over the course of the season, Peavy ranks in the bottom quartile of American League pitchers both in terms of results and peripherals. 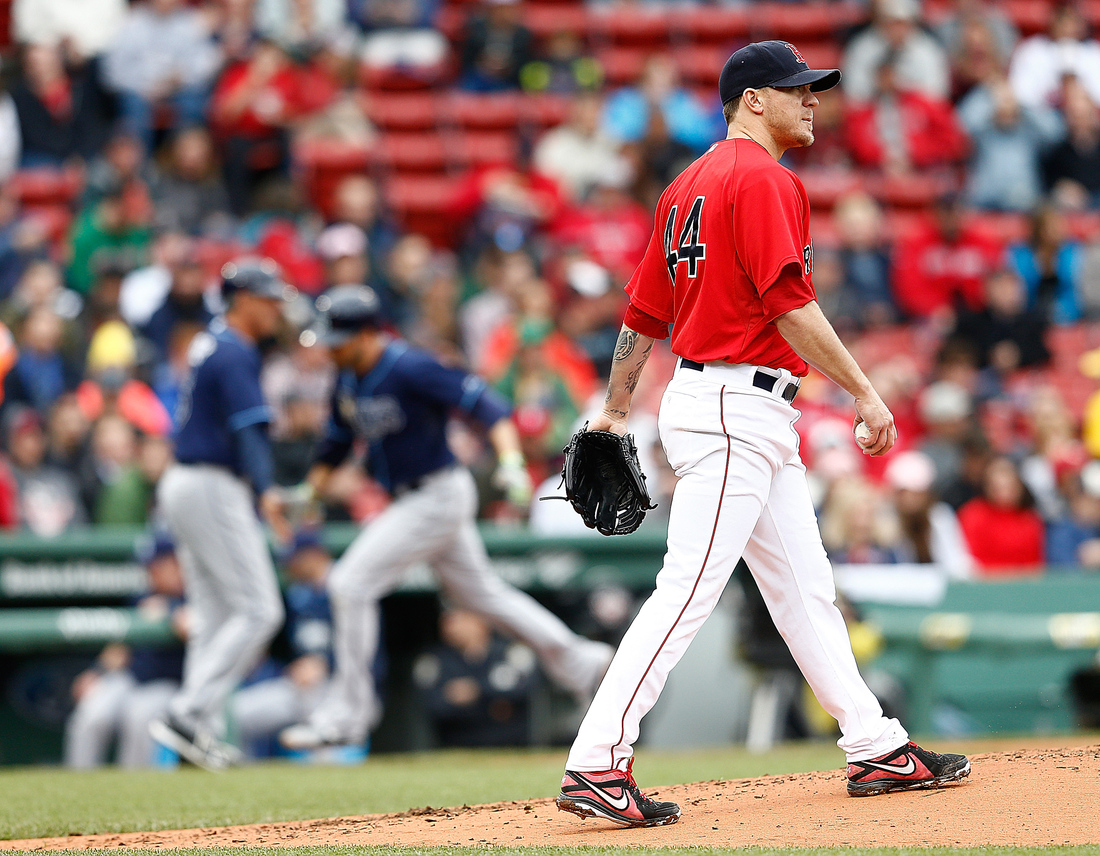 It's true that with a pitcher who has been as good as Peavy has in the past there's some hope for a turnaround. It's also true that his start against Cleveland might be the best we've seen out of him so far this season. But Thursday night against Oakland, even if the results weren't terrible, it was the same old story on the mound. Peavy's balls were too far gone to be terribly tempting, and his strikes caught the heart of the plate. He has lost his precision, and with it his effectiveness.

The obvious response to that is that the 2014 equivalent of Kyle Weiland is no one man, but actually a pretty impressive group of pitchers including Rubby De La Rosa, Allen Webster, Anthony Ranaudo, and possibly even Matt Barnes and Henry Owens. Would it really be surprising if one of those players actually proved better than Peavy is now? And even if they're not, it seems unlikely that the Red Sox couldnt' find one, even two of them who can at least come close to Peavy's present level.

Still, let's say just for argument's sake that all those players don't exist and the Red Sox would be stuck with a pretty bad pitcher in the event of a later injury. Even under these circumstances, as a player with a chance to be noticeably better than your average fifth starter, Brandon Workman is what the team needs given the situation they currently face. Down five games under .500 with seven teams between them and the wild card spot, the Red Sox are legitimately desperate. They can't afford to approach a playoff race the same way a team in a better position can--they don't just need to hold ground, they need to gain, and likely need to do so against teams that will be willing to go more all-in on this season than the Red Sox. 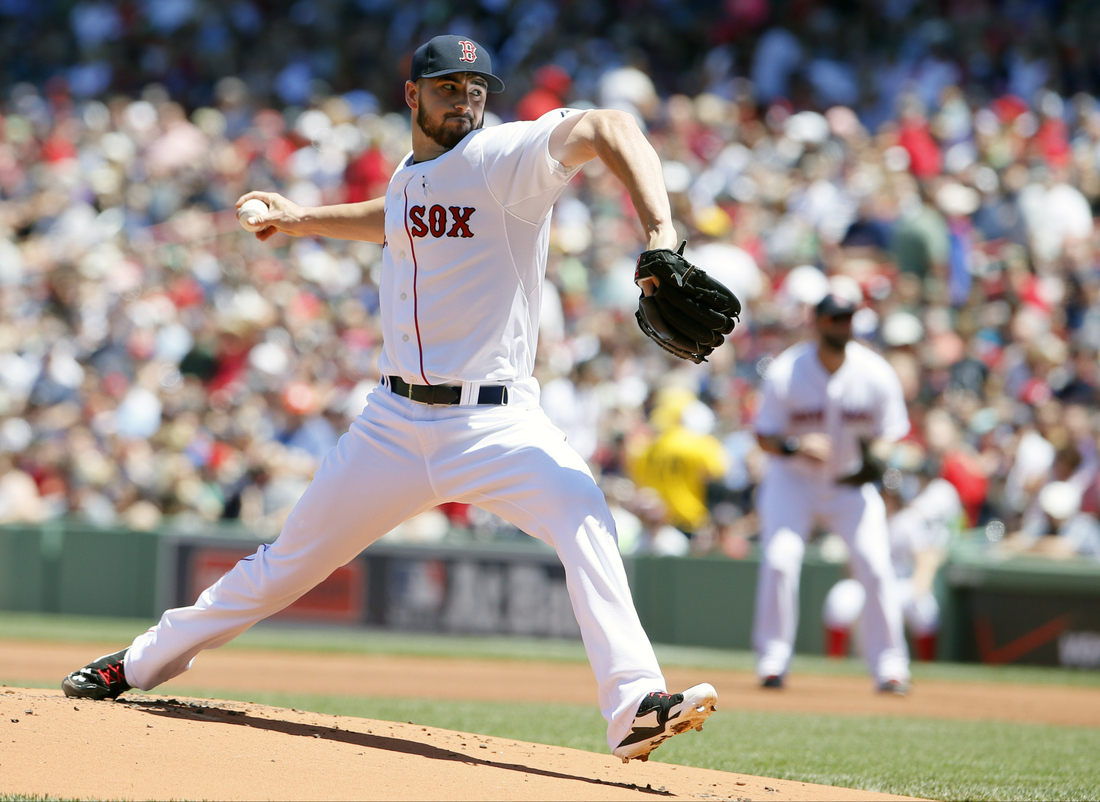 That makes every single at bat and inning pitched a resource. And right now every single inning that goes to someone pitching the way Peavy is can be considered wasted. On a good team, a fifth starter who can avoid being a tire fire every game out is a boon. It means there's no guaranteed loss every fifth game. A 2-2 performance from the first four does not guarantee a losing trip through the rotation.

The Red Sox don't need to go 3-2, or 4-1. They need to be going 5-0 as often as possible. It sounds like too lofty a goal to set for a team that's currently 34-39, but the reality is that the teams that most need to excel are the ones that are least likely to do so. It's not good news for the Red Sox, but it's the situation they face.

The demise of Daniel Bard

Does Brandon Workman get them there? Is he a special enough talent, the miracle the Red Sox need to get them into the playoffs? Probably not. It's a very high standard to set--we're talking Yasiel Puig and the 2013 Dodgers here in terms of individual efforts. But he's a lot more likely to contribute to the overall cause, and the Red Sox absolutely need to maximize the playing time given to players who can contribute.

Of course, if he's not, then we're in that other, less pleasant scenario. The one where it's far more obvious that Workman is the better fit. If we're looking ahead to 2015, after all, Jake Peavy isn't there. His contract is up, his option far from triggering (400 IP between 2013-2014), and the Red Sox not likely to be interested in bringing him back with so many pitchers waiting their turn for a shot in the rotation. Brandon Workman, on the other hand, might just be a key player if the rest of 2014 goes well.

This doesn't mean the Red Sox just have to kick Peavy to the curb and be done with him. There are other options to consider, particularly with there being no guarantee either Doubront or Buchholz will actually be any good in their respective returns. Perhaps Peavy takes up Chris Capuano's long-relief mantle if the Red Sox do indeed choose to part ways with the veteran. Perhaps that lasts for two whole Doubront starts before the lefty is shifted into the bullpen.

Whatever happens with Peavy, however, one thing is clear: the Red Sox are best served by keeping Brandon Workman in the major league rotation, no matter how they view their chances in 2014.