It's mostly gone to plan, and that plan was a good one.

The Red Sox had a brilliant 2012 draft. The picks they made haven't shot straight to the majors to help the team win already, and they didn't necessarily unearth any unknown quantities in late spots in the draft, but the obvious strategy of their draft was what made it worth that praise. The 2012 MLB Draft was the first under the new collective bargaining agreement, which introduced the concept of a draft budget: The Sox immediately found ways to exploit those limits in their first attempt.

The rules imposed a set budget with penalties, but allowed for slight overspending for teams willing to pay a tax on those dollars. A team is allowed to overspend by five percent of their allotted draft pool before any further penalties are levied, and the Sox used that to their advantage and went over budget ever so slightly to help them sign players like Ty Buttrey, a fourth-round pick who earned first-round money when the Sox inked him for a $1.3 million bonus.

More striking, however, was the strategy to draft college seniors for well under slot in order to move their draft budget around to players who would need to be signed for well over slot, like Buttrey. Mike Augliera led the NCAA in strikeout-to-walk ratio, but he was a senior who profiled as a reliever: the Sox used their fifth-round pick on him, which had a budget value of $218,000, but only spent $25,000 to sign him. He was far from alone in this, as the Sox also drafted the son of a team scout who was headed to the military, as well as Division II first baseman Nathan Minnich, senior pitcher Kyle Kraus, and shortstop Mike Miller. They ended up saving around $700,000 from their draft budget from selecting these players, and put that towards Buttrey and others: Even with those massive savings from the college seniors crew, the Sox still went nearly $282,200 over budget.

As they don't have a top-10 pick this year (but once again have multiple first-round picks), we might see a similar strategy employed in 2014. For that reason, it's worth revisiting 2012 to see how Ben Cherington's first draft went down.

Marrero was considered a possible top-five pick following his sophomore season at Arizona State thanks to his plus glove, which earned him Pac-10 Defensive Player of the Year honors. Concerns about his bat appeared during his junior season, though, causing him to fall all the way to the Red Sox at number 24 overall -- even with the concerns, it was considered a further drop than expected for him, but the Sox happily took a player whose glove alone set him up for a possible big-league career. 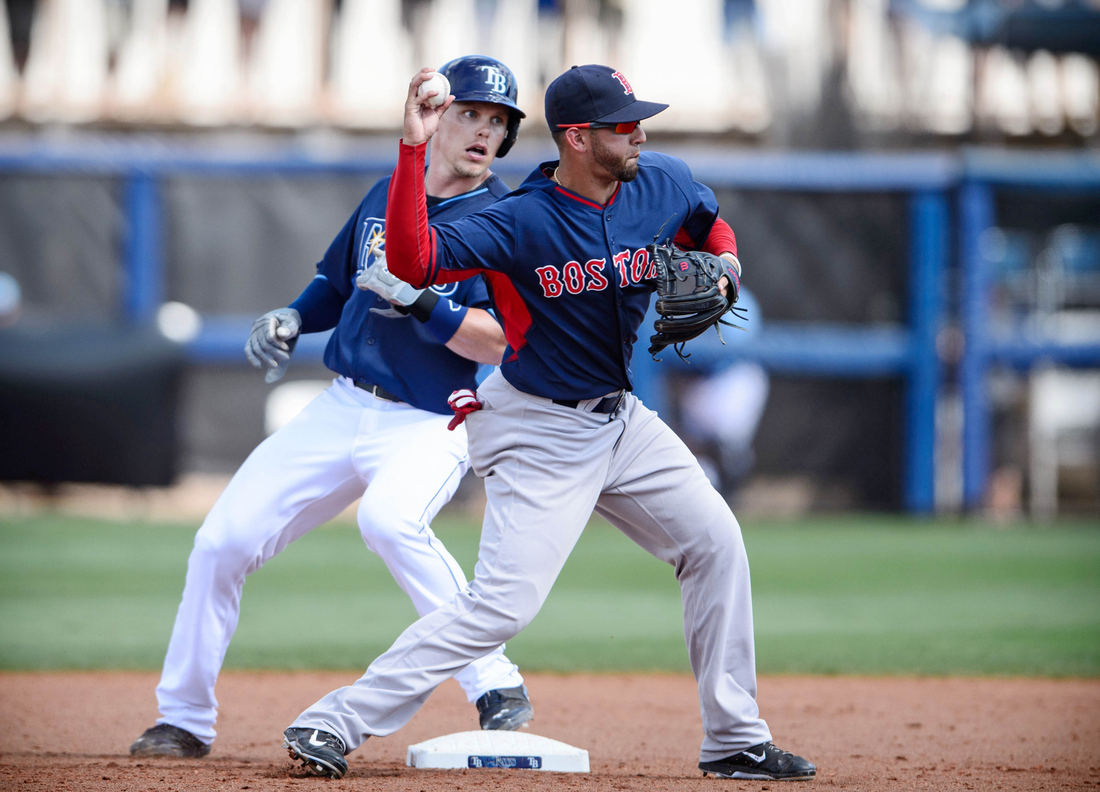 Marrero performed well in short-season ball following the draft, but then struggled to be better than adequate for High-A Salem in his first taste of full-season action. He seems to have moved past all that, however, as he's now batting .265/.346/.392 for the Double-A Sea Dogs, with 10 steals in 11 tries. Marrero had actually been performing at a much higher level than that, and showed off more than a singles bat for much of May, but a recent stretch has dropped him back down to this current line. It's his first full season in Double-A, however, and he's only two months into it, so we can show some patience here when it comes to these ups and downs.

If things go to plan, Marrero would be able to step in as the Red Sox shortstop in a couple of years, if not sooner, thanks to his glove. He doesn't have the same plus-plus defense of Jose Iglesias to lean back on, but he's still a plus defender, and has shown more offensively than Iglesias ever did. If another Marrero-type player -- intriguing ceiling despite concerns -- fell to the Sox at 26 this year, they would be hard-pressed not to snag him that late.

After a loaded 2011 draft class in which the Red Sox secured high-ceiling player after high-ceiling player with their first-round picks, many fans seemed confused about the selection of southpaw Brian Johnson at 31st overall the next year. As we've already gone over, though, the whole landscape of the draft had changed with the introduction of the draft budget: Johnson, who was considered a polished college arm who would move through the system quickly and sign for slot, was exactly the kind of player the Sox could draft and also needed under the new CBA.

2010 Draft review: Success outside the first round

Name a Red Sox prospect you're excited about. They were probably drafted in 2011.

Remember, this was before the Sox acquired Rubby De La Rosa and Allen Webster in the Nick Punto trade, when their pitching prospects were essentially what they had pulled out of the draft in 2011 as well as Anthony Ranaudo, who had his own question marks even before his 2012 struggles. Boston wasn't necessarily drafting for need here, since that's hard to do, but the system was light on pitching, and a high-floor, low-ceiling guy who could potentially fly up the ladder made sense, especially since he'd likely sign at slot. In addition, he had the kind of qualifications the Sox love, since he was a College World Series participant and had Team USA experience.

Johnson's movement through the organization was slowed by a line drive to the head and an in-season shoulder injury the following year, but he's now at Double-A Portland with an outside shot of moving up to Triple-A before year's end, depending on whether there's room in that rotation or not. His innings were limited by the shoulder issue, but he's done nothing but succeed when on the mound, and there are no ongoing concerns with that arm.

Pat Light was drafted as a starter, but the idea is that he'll eventually be a reliever, possibly a back-end one. He's had a rough go of things in 2013 and 2014, however, dealing with injuries and ineffectiveness, and it's got him stuck at High-A Salem right now for the first time, almost two years after signing. The idea was sound, and the fact the Sox want him to relieve rather than start means we can't necessarily take his performance at face value, but it would be a lot easier to love this pick in retrospect if he would start improving his strikeout-to-walk ratio and keep the ball in the park.

These two are young (Callahan is 19, Buttrey 21), and their numbers from their first seasons in full-season ball are not impressive. That first fact is what allows patience for the second. Buttrey and Callahan are both part of the next next wave of Red Sox pitching, the one that comes after Henry Owens, Matt Barnes, and so on, towards the end of this decade. Buttrey had the potential at the time he was drafted to be the best player the Red Sox selected from their entire signed class, and it still exists, but you'd like to see some sign of that sooner than later. As for Callahan, he was the youngest pitcher in the New York Penn-League this year, and he's one of the youngest in the Sally at the moment. It's too soon with him to judge things one way or the other, but he does have mid-rotation potential, especially if his command improves.

Augliera made it to Double-A faster than any other pitcher the Sox drafted in 2012. He hasn't been mowing down the opposition while there, but you can forgive him a bit for that, as he's a reliever currently trapped in a starting role thanks to Boston's developmental preferences for their pitchers. He's managed to average over 6-1/3 innings per start with Portland despite not having any swing-and-miss whatsoever in his game: Augliera has racked up all of 26 strikeouts in his 64-plus innings and 10 starts, but at the same time, he's also only walked a dozen batters: it's pretty clear what his strength will be when he finally moves to relief.

If Augliera can turn into a big-league reliever who avoids handing out walks and can induce the occasional grounder, he should be useful for more than just the significant discount he gave the Sox on his bonus. He might pick up a few more whiffs or grounders when he can focus on short-burst velocity as a reliever, too, so don't bury the idea he'll never miss any bats just yet.

Haley was the oddity in Boston's selections from rounds five through 10, as he signed around slot. He's shown why since, however, as he's acquitted himself in short-season ball, Low-A, and now High-A, where he looks like he might be done learning soon. He's not going to be a dominant arm or anything, but Haley keeps the ball in the park, and as of the second half last year, throws strikes -- good ones, too. There's an outside chance of him being a back-end starter, but the smart money is probably on a switch to relief, like so many other picks from outside the first round who succeeded up through High-A.

We'll see how the Red Sox handle themselves in Thursday's draft, but considering they have a pair of first-round picks at 26 and 33 and the quality of this particular draft class, we might see a strategy that looks an awful lot like 2012's, so that the Sox get the players they want even if it doesn't result in the deepest pool of signings. If the 2014 players end up in the same place 2012's have two years down the road as well, then even better.