Is Chris Capuano the next veteran to go?

Grady Sizemore was designated for assignment yesterday, and he may not be the last veteran to receive that fate.

Share All sharing options for: Is Chris Capuano the next veteran to go?

Yesterday afternoon, it was announced that Garin Cecchini would be rejoining the Red Sox. After an hour or so of guessing what the corresponding move would be, we found out that the struggling Grady Sizemore was finally being designated for assignment. Given all the excitement around the former superstar in spring training and the first week of the season, give or take, his struggles have been a punch in the gut. It's tough to see a guy like him not succeed, but it's been clear for some time that he isn't the same player anymore, and a move like this was inevitable. It was a matter of when, not if. Sizemore isn't the only cheap veteran who was brought in this offseason who may be let go soon, though. Chris Capuano could be next on the chopping block.

The signing of Capuano was a bit controversial amongst the fan base, if you remember correctly. It came shortly after Ryan Dempster announced he would be sitting out for the entire 2013 season, leaving the Red Sox short of a long-man who could step in for spot starts. With all of the depth in Pawtucket, many believed they should just let one of those guys take over that role. Ben Cherington, however, decided to bring aboard a proven veteran on a cheap deal.

More: The death of the Grady Sizemore dream

The best thing about this kind of contract tends to be that they're easy to get rid of when they go poorly, as they often do. Somewhat unexpectedly, however, Capuano actually started the season off quite well, and even earned himself some high-leverage spots towards the end of April. He didn't allow a single earned run in his first twelve appearances, spanning 15 innings, and had a 15/3 K/BB in that time. He looked like a legitimate steal for the front office.

Of course, it hasn't stayed that way since then. For the last month and a half, Capuano has been more the pitcher most prognosticators expected him to be, struggling mightily since the beginning of May. In that time, he's come into 15 games, pitching in 14-1/3 innings, producing a 6.91 ERA. The peripherals don't help him at all either, as his K/BB is at 11/12 since the start of May, and he's allowed two long balls to boot. Even more concerning is how easy hitters are seeing the ball from him, hitting .317/.432/.533 as a whole. The struggles have only gotten worse as time has passed, too, and because of that his outings are becoming more and more spread apart. He's made just three appearances in June, and failed to record an out in his first two. 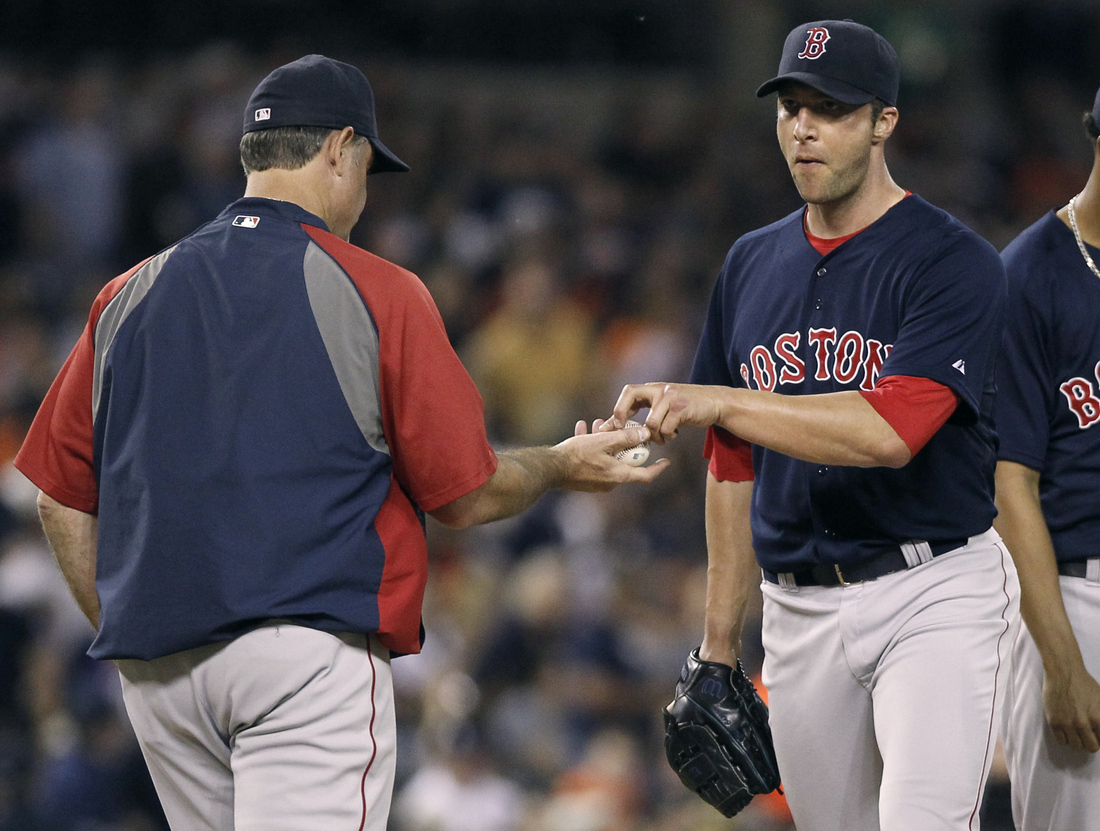 It's now been a week since Capuano last entered a game, and it's clear that John Farrell is becoming more and more wary of bringing the 35-year-old in. Ben Cherington has shown in the past that he'll do everything possible to keep the most depth possible on the roster, but it just doesn't make sense in this case. With Felix Doubront approaching his return date to the team, one of Rubby De La Rosa or Brandon Workman will be forced off the roster, most likely the former. De La Rosa has shown great flashes in his time in Boston, and has enough of a minor-league track record to be kept on the major-league for the long haul.

The easiest way to do that is to allow him to take Capuano's spot, and treat him like the swingman Alfredo Aceves was in 2011. He's shown he deserves an extended look in the rotation, but he unquestionably has the stuff to survive in the bullpen if the organization wants to give Doubront his starting spot back. As for the depth that would be lost, they already have plenty of it, with guys like Allen Webster, Anthony Ranaudo, Matt Barnes, Drake Britton and even Alex Wilson in Pawtucket, and Clay Buchholz making his way back from injury as well.

Through the first month of the season, Chris Capuano was one of the big surprises on this team, performing admirably and earning John Farrell's trust. Much of that trust has gone out the window in the time since then, though, and he's now arguably the final reliever on the depth chart. With Doubront's return fast approaching, the Red Sox have to decide between keeping a veteran, or keeping their young guns like De La Rosa. If it was me, Capuano would be designated for assignment when Doubront comes back, and De La Rosa would take his spot in the bullpen. With Cherington's well-known love for depth, it's unclear if he'll actually be willing to go this route, but it seems like the best move for the Red Sox to make right now.