Seriously, what does he have left to prove?

As Bryan covered wonderfully last week, the disappointing play of the Red Sox lately has been immensely frustrating, and probably to no one more than themselves. That doesn't make our annoyance as fans irrelevant, but it is useful to keep in mind. So much of the frustration, too, comes from the simple fact that we all know that the Red Sox are better than this. It's basically the same team that just won a World Series, and now they're in fourth. Without expectations, we might not be happy, but we wouldn't be mad.

And it's pretty low to be mad at Shane Victorino for being hurt, or Jackie Bradley for not immediately figuring out major-league fastballs, or Felix Doubront for hurting his shoulder. (For not telling anyone he hurt his shoulder, maybe. But not the injury itself.) Clay Buchholz isn't forgetting how to throw his changeup on purpose, nor is Edward Mujica trying to throw batting practice fastballs every time out. Lousy performance on the field is terrible to watch, but there's very little action that can be taken directly to fix it. There's not much point in yelling about it, really.

So what, then, can we yell about? Well, that brings us to the guy in the picture. As of this moment, Jon Lester will become a free agent at the end of this season, and given Lester's career and the state of Boston's pitching going forward, I can't think of a single good reason why. But let's at least try to suss it out, since we are assuming that the Red Sox front office is not, in fact, deeply stupid.

One possibility is that Lester hasn't warranted the sort of contract extension you'd give to an ace. This argument has come up a lot on sports radio and among the lesser columnists, which should give you a good idea of its actual worth. But sure, Jon Lester isn't Clayton Kershaw, nor is he Pedro Martinez. I don't think that's a terrible libel upon the guy. So who are Lester's comparables, and do they put him anywhere near ace status? Let's go to the ever-invaluable Play Index!

For those who didn't click, I went simple, tried to find every pitcher in the AL who's had 1200 IP, 1200 K, and an ERA under 3.70 since 2008. It's a short list. Justin Verlander, Felix Hernandez, James Shields (how's Wil Myers doing these days?), and Lester. That's quite a nice list, and you'll notice that two of those guys recently received extensions in the $175 million range. Is Lester worth that? Verlander's had a better peak and Hernandez is younger, but those sort of numbers could (and frankly should) be on the table; if not from the Red Sox, then certainly from some other team. New York just threw that much at Masahiro Tanaka before he'd thrown a single MLB pitch, does it seem silly to imagine them doing the same for a guy with Lester's pedigree? 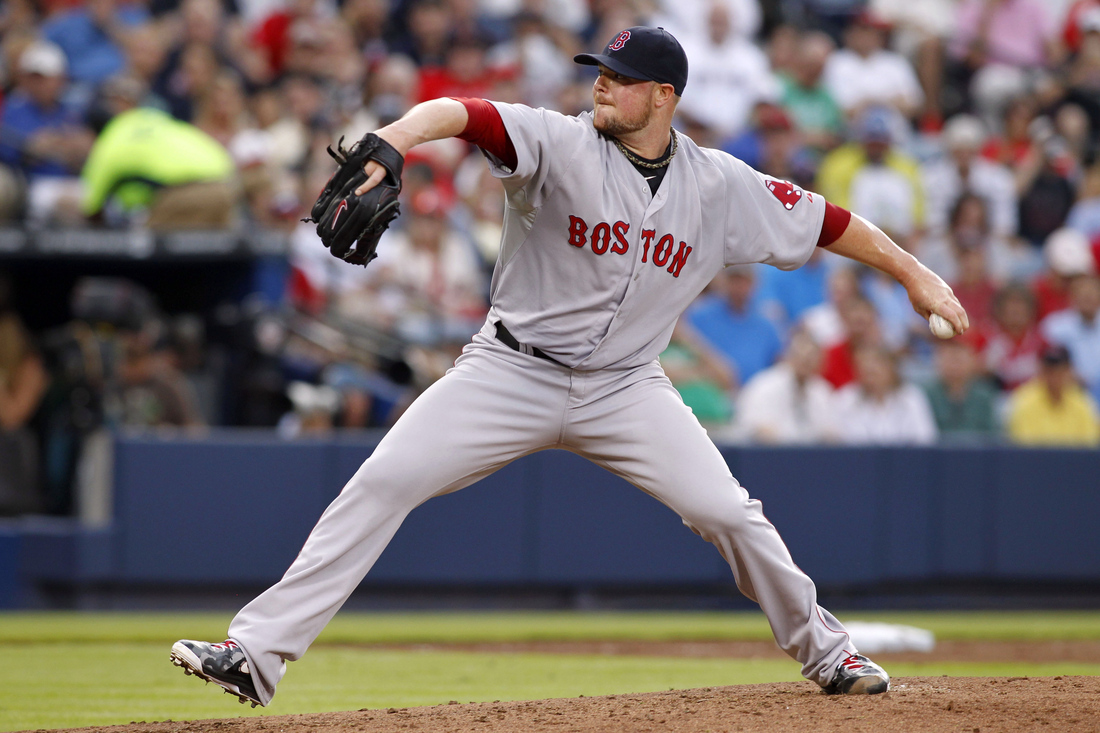 It's also possible that Boston has decided that with their strong farm, they don't need to extend Lester, but can instead rely on the young arms coming up to take his place. After all, why extend a guy heading over the hill into the dark twilight of his thirties when you have young, fresh arms on the horizon? There's only one tiny problem with this plan: it's entirely based on the assumption that anyone on the farm right now is as good, or will be as good, as Jon Lester. And they're not. And they won't.

Brandon Workman and Rubby De La Rosa are already serviceable major league pitchers. Matt Barnes and Allen Webster will probably be serviceable major league pitchers. And everyone else in the system is an unknown. Boston has an assortment of good mid-rotation starters on the farm, which puts them ahead of just about everyone else in the game. But you don't abandon an ace for the possibility that a mid-rotation guy turns into Cliff Lee.

(While we're at it, let's look at the big-league rotation going forward. John Lackey's here through 2015 if the Sox exercise that elbow-clause option. Jake Peavy has an option, but hasn't done anything to warrant its pickup. The long-term veteran anchors of the rotation are Clay Buchholz and Felix Doubront. A cold breeze, heavy with foreboding, actually moaned through the eaves of my building as I typed that sentence.)

Baseball fans get really weird sometimes when it comes to risk. They can look at Jon Lester, a man who throws 200 quality innings a year and has been on the DL once, and worry that he might someday get hurt. But they'll embrace as certain the idea that Anthony Ranaudo's laser-straight fastball won't get eaten alive the minute Jose Bautista gets a look at it. Or they'll decide that because Jon Lester won't be as good when he's 36, it's not worth having him when he's 31-35. Heavens forfend that a team should overpay a valuable player after his peak.

Stephen Drew may need an MRI

Jackie Bradley Jr.'s ridiculous throw Stephen Drew may need an MRI
Having brought up money, let's get into that a bit. Say Jon Lester is looking for $20+ million a year. Is there any particular reason not to give him that money? Keep in mind we're talking about the Boston Red Sox here. A team that can field a $170 million payroll without blinking, and go $190 if they think it's worth it. Next year, they're on the hook for $78 million in guaranteed contracts. The year after that, it's $13 million. We're not talking about the Phillies here, a team weighed down by a half-dozen overpaid veterans with one working knee ligament among them. If John Henry can't shake the piggy bank to keep one of the best pitchers in team history, then what's the point of owning the Red Sox? Just because the A's and Rays have to be careful with every nickel doesn't mean Boston has to.
You may have noticed that I called Jon Lester one of the best pitchers in Red Sox history. I did that for the simple reason that he is. Part of that, I will freely admit, is that Boston's not exactly been a franchise known for its pitchers. But check the franchise leaderboards, and Lester's all over them. This team has had three guys in the last 35 years throw at least 1300 innings with a sub-4 ERA. Lester's one. The other two belong in Cooperstown.
Jon Lester's not Pedro. He's not Clemens. But he doesn't need to be. Just being Jon Lester puts him ahead of anyone else the Sox have had in a decade. More importantly, it puts him ahead of anyone they're likely to have anytime soon. I can understand the Red Sox being a bit gun-shy about big contracts after the two most recent they signed blew up in their face. I can understand worrying about a pitcher as he gets older, and the temptation of all those cheap young arms down in Pawtucket and Portland. But every baseball move is a gamble. The best young home run hitter in team history had his career ended by a beanball, a throw-in pitching prospect traded to Baltimore racked up 3,000 Ks, mostly in non-Boston uniforms. All you can do is take your chances, and hope the bet works out.
Jon Lester's spent eight years proving himself just about the safest bet on the board. It's time for the Red Sox to put their money down.