MLB Draft 2014: Where does Michael Chavis rank in the Red Sox system?

We know he was worth a first-round pick, but where does he stack up against the other Sox prospects?

Share All sharing options for: MLB Draft 2014: Where does Michael Chavis rank in the Red Sox system?

The Red Sox selected high school shortstop Michael Chavis with their first pick, the 26th in the 2014 MLB Draft, last Thursday. To this point, we've only heard about where Chavis (and others) ranked within their draft class, but the real question now is where he ranks among the rest of the Red Sox prospects. Granted, Chavis isn't officially a Boston prospect until he signs, but his stock isn't going to go up and down between now and then, so we can analyze him just the same.

In order to do so, we enlisted the help of a few prospect analysts to give us the necessary perspective on Boston's shiniest new first rounder.

Michael Chavis was a steal at 26, and I bet when sites play draft revisionists in the coming years, Chavis will be in the mix for one of the top bats in the class. He can flat-out hit, which is something that often gets lost in the modern showcase world where power potential is paramount and five o'clock bats make millions for their particularly parlor trick. Chavis might have the best bat-to-ball ability in the class, a true hitter that can square velocity, keep his hands back on off-speed offerings, shows the necessary combo of balance and bat speed, and offers some power potential without selling out for it.

The defensive profile isn't at shortstop, which hurt his stock, but he is a good athlete with strong baseball skills, so either third or second are possibilities on the diamond. It's a very smart pick for a franchise that has excelled in recent years acquiring players with impressive bat-to-ball skills despite not always looking the part or fitting into a top tier profile (Cecchini, Betts, Rijo). Hitting is the most important tool a position player can possess--something that some [read: me] argue can't be taught, and Chavis could end up owning one of the best hit tools in the 2014 class.

I haven't started working on the individual team lists. Chavis is a very legit bat, but he's still a HS kid that comes with risk. But he's a top 10 talent in that system.

Chris Crawford, Draft to the Show

I thought the Red Sox did really well in acquiring Chavis that late in the first round.He sort of reminds me of DJ Peterson; there isn't elite bat speed and there isn't much loft to his swing, but he squares everything up and because he gets through the zone and rotates his hips so well, there's a potential for above-average power. The hit tool is the key for Chavis though, as a right-handed hitter with excellent feel for hitting and the ability to hit line drives to all parts of the field. 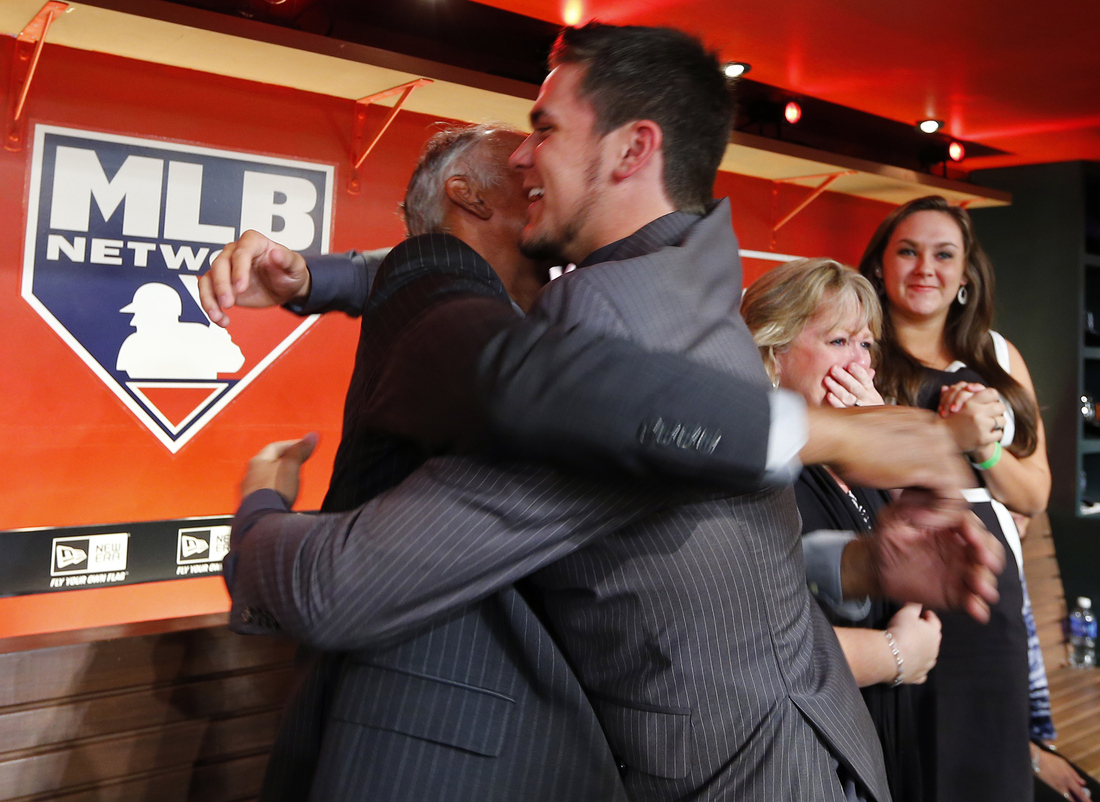 Defense is the question mark here; I don't think there's any chance he can stick at shortstop because his speed and quickness is below-average, but he should be able to move to third and be above-average there with an above-average arm.

There isn't much projection left, but I could see Chavis moving relatively quickly through the system and becoming a regular at third, with quality bench bat as a floor. I'd put him ahead of Anthony Ranaudo, in that 5-7 range in the system.

The Red Sox have selected high school infielder Michael Chavis with their first pick in the 2014 MLB Draft.

Rounding up Boston's draft picks from the first 10 rounds.

Chavis has a chance to be the best hit tool in the draft class, with solid power as well if everything clicks. The bat speed is impressive and his feel for the barrel even more so, with a knack for squaring up balls and very loud contact. It's a high effort swing that will draw comps to Dustin Pedroia's for obvious reasons, but he doesn't have the same length. I'd think the similarities are closer to Clint Frazier (2013 first rounder for Cleveland) but Chavis doesn't have the same issue with frontside leak and drift. Chavis also isn't as refined as Pedroia was moving through the
minors, but he's starting as a prep guy and not someone with three years of Pac 10 ball under his belt. He'll obviously need reps but as a starting point it's really advanced for a high school kid and I think there is a
good chance he takes to the pro game quickly and starts putting up numbers.

He has a compact build and is much more athletic than you'd think to look at him. I think he could handle third or second without issue, and if the bat weren't so promising (and were Swihart not lining up as a long term solution) you could shift him behind the plate, as well. Solid arm strength that will play across the infield.

With my focus on the draft through the spring, but particularly in May, I haven't been able to follow the progress of the Red Sox system as closely as I'd like, but if forced to decide I'd slot him right behind Blake Swihart. I'm thinking that will bring him into top three prospect in the system territory when that decision rolls around in November.

What do you think? Are you more or less excited for Chavis to sign and get himself in a Spinners or GCL uniform as soon as possible? This is quite a range for the rankings, with as high as third and as low as just making it into the top 10, but considering they drafted 26th overall, getting another top-10 prospect in this still-loaded system is impressive.