Who could the Red Sox sell?

The Red Sox are looking more and more like they could be sellers in July, so what do they even have to sell off?

Share All sharing options for: Who could the Red Sox sell?

The Red Sox's season is not over. Of course, it seems silly to have to say that on June 10, but with the way things have gone thus far people are justifiably losing their patience. Despite the struggles, Boston remains just five games out of the final playoff spot in the American League. That's about it for the positives, though. While they are somewhat close to the playoffs, they are also one game ahead of the Astros for the second worst record in the league.

The division is slipping away, and doing so quickly. As of today, the Blue Jays have a nine game lead over the Red Sox, who sit six games under .500. With the extremely disappointing season has come calls for the team to get rid of some of their veterans and make room for the younger players, essentially becoming sellers. Right now, it's too early for that, as there is still too much talent to completely give up on the season. However, if it does get to that point, do the Red Sox really have that much to sell?

If the Red Sox do become sellers, it will be important to remember that there are different degrees of selling. Boston isn't in a situation like the Cubs or the Astros; they are going to be right back to trying to contend in 2015. They aren't going to be able to completely sell off any and all of their veterans and wipe out the whole roster. This means some attractive trade pieces would be taken right off the table. Two of those guys are Mike Napoli and Shane Victorino. Napoli's right-handed power has proven to be a valuable quality, and could likely turn into a nice piece in return for a trade, but the Red Sox don't have a replacement ready for him unless you believe Ryan Lavarnway or Travis Shaw is ready to contribute on a full-time basis, but that seems far-fetched. Victorino has shown an ability to hit and play elite defense, but has also struggled to stay on the field. We've seen all season what happens when he's missing from the lineup, though. Boston just doesn't have the outfield depth to go into next season without Victorino. Bryce Brentz and Alex Hassan are solid players and can be bench contributors, but they aren't going to be holding down a spot in the lineup in 2015. So, with this in mind, who could the Red Sox possibly trade?

These two are grouped together because, while the Red Sox have a ton of pitching depth at the top of their farm system, none of the arms look to be as consistently productive as either Lester or Lackey. Because of this, it would seem unlikely that both of these guys would be on the move. Lester would probably get the bigger return, despite the fact that he'd probably just be a rental. His talent is undeniable, his durability is extremely valuable and he's shown a new level of consistency this season. Assuming an extension between Boston and Lester doesn't get done any time soon, expect playoff contenders like Seattle, Los Angeles (Angels), Cleveland or other teams looking for a number two starter to come calling. If they feel like they can re-sign him, the Red Sox will get a lot, but they'd get a nice haul regardless. However, Lester is showing that he is a very valuable pitcher, and Boston doesn't have anyone in the farm system who looks like they'll be as good as him. They'd be better off focusing to keep him long-term, not dealing him for prospects.

Lackey would also get a nice haul in return for his services. The 35-year-old has come back in a big way the last couple of seasons, with a 121 ERA+ and a 4.2 K/BB in the last two years. While he's not as flashy as Lester and doesn't have th same ceiling, he's arguably more reliable, and any team could feel comfortable slotting him in the middle of their rotation. He also is only owed the league minimum in 2015 due to his missing the entire 2012 season. Being able to sell a veteran pitcher with Lackey's skills at that price is a rare opportunity. I'm still skeptical of trading him because he could help a lot in 2015, but if they are going to trade one of Lester or Lackey, the latter would be the way to go. He's their best trade chip this year.

This is blasphemy to even think about, but trading Uehara could be a smart move for the Red Sox if they fall too far out of the race. There are always contending teams who are looking for bullpen help for the stretch run (Hello, Tigers), and an aging closer isn't really a big piece for a losing team. With that being said, there's no reason to believe Koji won't still be elite a year from now, and the Red Sox could be missing that arm if/when they're back to contention in 2015. It really comes down to how one would feel about Junichi Tazawa taking over the closing spot. He's shown elite strikeout-to-walk skills over his career, and I would feel comfortable with him holding down the ninth inning. While I'd be wary of trading even just one of Lester and Lackey, Uehara seems like the most obvious player to move if the team goes into selling mode in a few weeks. 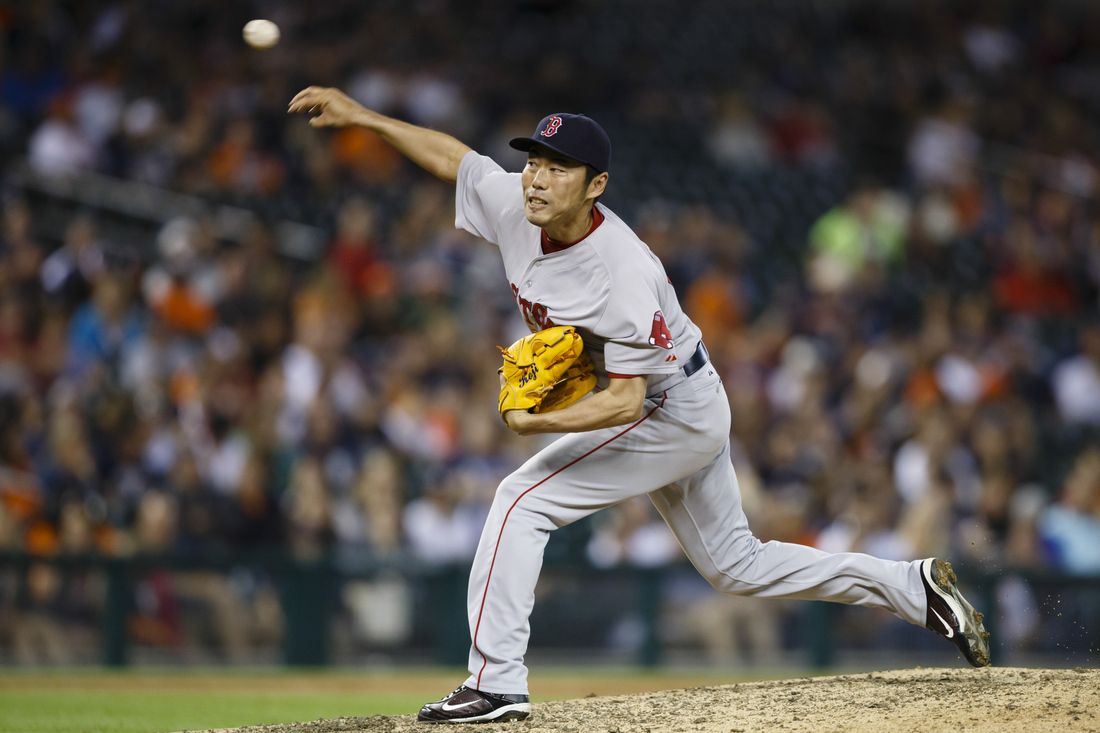 The young third baseman has already lost his spot in the lineup when the team signed Stephen Drew. He's on the disabled list for the time being, but if he comes back before the trade deadline, could he be a guy the Red Sox try to move? On the one hand, there are definitely plenty of teams who would be willing to take a chance on the young third baseman. He's still just 25-years-old, and his power tool is just too much for most teams to pass over. On the other hand, Middlebrooks has now struggled for two straight years, and his value is at an all-time low. The Red Sox would be much smarter to let him come back from the disabled list as a bench player. He'd get more at bats than a typical bench infielder, but they'd primarily come against left-handed pitching. That wouldn't build up his value too much, but you'd hope he can boost his profile as much as possible and wait to move him until the offseason, when Garin Cecchini is more polished and ready to contribute.

It seems strange to consider trading a player who was signed less than a month ago in a move designed to make a push this year, but here we are. The Red Sox have struggled mightily since signing the shortstop, and are coming close to playing themselves out of the playoff chase. If it comes to that point, Drew is another guy who would just make sense to trade. They could move Bogaerts back to shortstop, and let Brock Holt and Middlebrooks split time at third. In fact, it seems to work out perfectly, since Detroit could use both Uehara and Drew. Whether or not they have what it takes to land them both, who knows, but it's definitely something worth considering.

Both of these guys are grouped together because they are essentially in the same situation. They are both veteran players who are set to hit free agency after this season, and they've done nothing but drive down their value this season. They have too much talent and too much of a pedigree to just be designated for assignment, but neither of them are getting much of a return. If the Red Sox did trade these guys, it would be strictly to make room for younger players. Christian Vazquez could get some experience in the major-leagues (and Blake Swihart could be pushed to Pawtucket), and one of the AAA arms could take a permanent spot in the rotation.

As I said at the start, the Red Sox are not yet at a position where they are clear sellers. They are within shouting distance of a playoff spot. With that being said, it's something they need to be considering at this point. Watching them play every night, they don't look like a very good team. If this continues for the next month, they will be sellers. At that point, the only players I would definitely move would be Koji Uehara, Stephen Drew, Jake Peavy and A.J. Pierzynski. While the first two are solid players, they either aren't good enough or don't play an important enough position to demand a true haul in return. They would get worthwhile packages back, though. Anything the latter two could get back would be a win. They could also deal John Lackey, though that depends on how you feel about the pitching depth heading into 2015. If you think they don't need him to win next year, trade him and get a good return. Personally, I'm not convinced that would be the way to go. Whichever way you look at it, the Red Sox have some decent pieces to sell if it comes to that this season, but it won't be some extreme fire sale.