A Red Sox turnaround could happen, but don't hold your breath

There is reason to feel optimistic that the Red Sox can make something of this season, but that optimism needs to meet a positive reality soon or...

Share All sharing options for: A Red Sox turnaround could happen, but don't hold your breath

Of course, the thing about winning 111 games is you have to play at a 111 win pace for 162 games. The Dodgers played at a 111 win pace for 90 games which is why they won 92. But the point is, it can happen. Teams play badly then play very well. We’ve seen that recently here in the whiplash-inducing last month of the season.

There have been a lot of teams over the course of baseball history that have been roughly 10 games out of first place in June. A lot a lot. And the vast majority of them have wound up missing the playoffs like the good little mediocrities they were. Maybe that’s what this year’s Red Sox are. But there are the few, the proud, the very few like the 2013 Dodgers who turned nothing into something and made a run of it. So it can happen. It has happened.

And truthfully we probably should. Large portions of the team that won 97 games and the World Series less than a calendar year ago simply don’t exist anymore. Dustin Pedroia’s power? Gone. Production out of the catcher position? Mostly gone. But perhaps the most alarming part of last year’s team to disappear is the outfield.

A simple search of FanGraphs reveals this year’s Red Sox outfielders to be dead last in baseball in fWAR. They’re also dead last in wRC+, wOBA, slugging percentage, and batting average. They’re one point – one measley point! – above the White Sox and Mariners in on-base percentage, but after last night’s performance they’ve probably got that one too.

This isn’t to dismiss anything else that has happened, such as bad luck, injures, or Clay Buchholz’s setting himself afire in a public square. Virtually, I mean. But to put this in context, last season (again, by FanGraphs fWAR), the Red Sox had the best outfield in baseball. That’s in terms of WAR so by total contribution, outfield defense, base running, and hitting, the Red Sox had the best outfield in baseball. This season, they are the worst. That’s quite a transition. It’s almost as head-snapping as a 10-game losing streak followed by a seven-game winning streak followed by a oh who the heck cares losing streak. 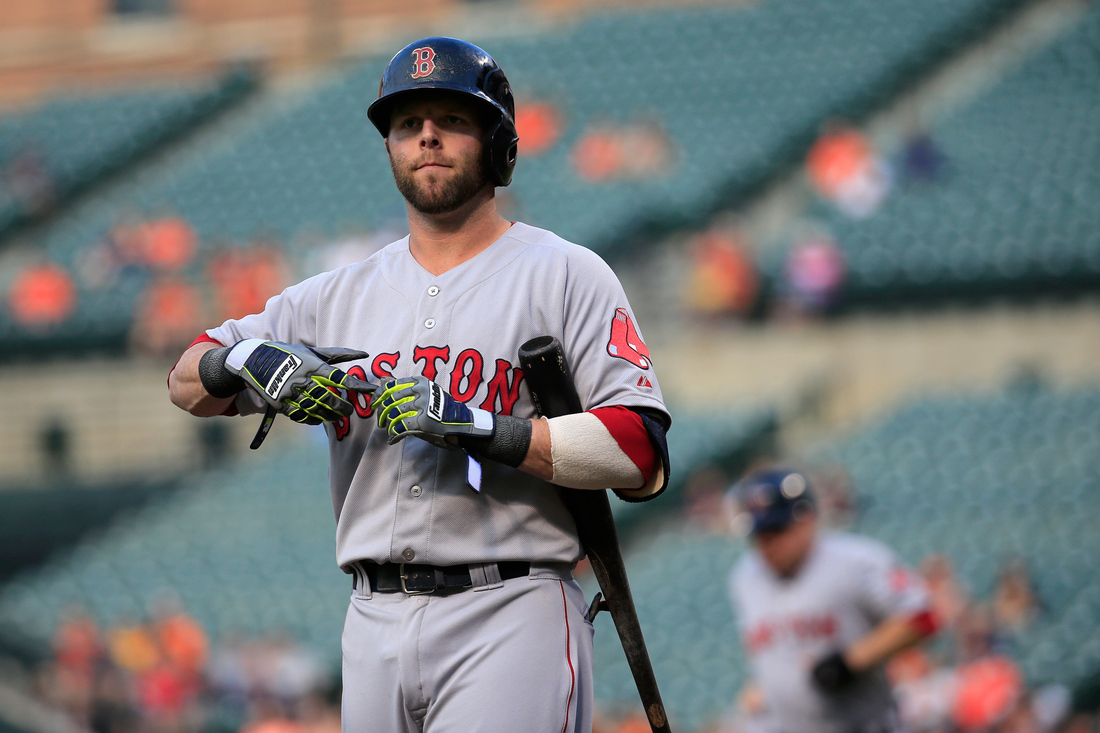 The thing about baseball is that you never know who will contribute to a win tonight, but when you can scratch one third of your lineup off that ‘who might contribute’ list, that’s like scratching one third of the wins off the list as well. (I’m speaking generally here, not mathematically.) To be sure, the Red Sox have done about a third more losing than they’ve done winning. And sure enough, if you knock a third of the Red Sox losses off and convert them to wins, they go from 28-35 to 40-23, good for a two-game lead on the Blue Jays (ignoring that some of those wins might come from the Jays and thus change their record) and pretty much right in line, I think, with what we were expecting of them. The point is the Sox have been playing the season with two thirds of a lineup, and frequently a sixth of that good two thirds has been Ryan Roberts, Will Middlebrooks, or David Ross. It’s tough to win like that.

There are many things that made the mid-aught Red Sox teams good, but one that stands out, and especially so in light of this season’s struggles, is the depth of the lineup. The word "depth" has come to mean back-ups around these parts recently, but lineup depth is what this team really needs. They need to be able to win when David Ortiz goes 0-for-4, when Dustin Pedroia is having a rough month, when Xander Bogaerts remembers he’s just 21 years old for a few games.

Ortiz's game-winning homer against the Tigers

The Red Sox needed an Ortiz special, and he delivered.

Chavis on getting drafted by the Red Sox

Michael Chavis, considered one of the top high school bats in the 2014 draft, is excited to join the defending World Series champions.

There is some reason for hope. The first is, this is the same roster more or less that won the Series last year. Jonny Gomes and Daniel Nava are still here (for now, assuming they haven't sent Nava to Triple-A between writing this and publishing it or immediately after publishing) and both can reasonably approximate what they did last season against opposite side pitchers if John Farrell uses them that way. Nava’s recent hitting is promising in this regard. After that things get rougher.

Jackie Bradley Jr. has the pedigree to hit major league pitching, and I think he will, but he hasn’t yet, so as long as that’s the case, it’s fair to wonder if he ever will. His age (24) and his minor league track record (exemplary) give reasons for hope even as each at-bat of his seems to detract from that stockpile a little bit at a time. Expecting Shane Victorino to replicate his 2013 season was probably always a fool’s errand, but hoping he could be a productive two or three win player, the guy the Red Sox signed him to be in the first place, wasn’t pushing it too much, I don’t think. While injuries have mostly kept Victorino off the field and ineffective when on it, his track record does give some more reason for hope. I mean, he was excellent just last season.

The last reason for hope is this: the trade deadline is coming up and the Red Sox have a strong minor league system (oddly mostly bereft of outfield talent save Mookie Betts) from which to acquire talent with. The question is, is this team worth spending future capital on? There's an argument that says Boston is only six games out of a Wild Card, so some strong play like we expected from this bunch going forward and things should fix themselves pretty quickly. The counter argument is everyone in the AL save the Rays is six games out of a Wild Card or better and that includes the Astros.

We’ll know a lot more after the next month. That’s a lousy answer, but really, just another lousy answer in a long line of them when it comes to the 2014 Red Sox.