There's only so much space on the 40-man roster, so someone will have to go.

Share All sharing options for: Expect a big Red Sox trade this summer

It's likely the Red Sox will make a large trade this season. This isn't me relaying a whisper from a source, or a cry from a writer for the Red Sox to upgrade their roster: it's simply a matter of math. The Red Sox are and have been overflowing with prospects, and at some point, they're all going to need space on the 40-man roster. That space doesn't exist, and likely never will for many of the kids, meaning the Sox will have to turn them into pieces for trade or lose them outright come Rule 5 draft time. Given how many prospects need to be moved, it could be a big deal in terms of size, if not return.

In the last few years, the Sox have added Xander Bogaerts, Jackie Bradley Jr., Brandon Workman, Anthony Ranaudo, Drake Britton, Christian Vazquez, Dan Butler, Ryan Lavarnway, Rubby De La Rosa, Allen Webster, Alex Wilson, Steven Wright, Garin Cecchini, Will Middlebrooks, Bryce Brentz, Brock Holt, and Alex Hassan to the 40-man roster, either because it was time for a promotion to the majors or to protect an asset from the prying hands of the league at the Rule 5 draft. (Or, in the case of De La Rosa and Holt, because they were already on the 40-man roster of the team they were acquired from). That's an excellent influx of youth, with those who aren't already in the majors likely coming within the next year or two depending on need, but it's nowhere near the end of the line for internal roster additions, nor is inclusion on the list a guarantee of a future in Boston.

There are a few players from that group who could be (and likely will be, through one avenue or another) removed from the 40 easily, such as Wilson -- a 27-year-old reliever who is likely the first option to be designated for assignment should a need arise in-season -- or Ryan Lavarnway, who has been pushed out of the picture behind the plate in both the present and the future and is in his final option year. There is also Steven Wright, a knuckler who has his uses, but is more of a depth piece at this point given the quantity of pitching around him.

Space is good, and more space will be opened up when free agents depart at year's end. The Sox will need all of it, between filling those holes through internal means and free agency. There are four players the Red Sox are likely to give 40-man spots to this winter, all in the name of protecting them from the Rule 5 draft. There is right-handed pitcher Matt Barnes, who is arguably their top pitching prospect. There is Blake Swihart, who is inarguably their top catching prospect in a system full of them. Then there is 22-year-old Sean Coyle, who is a step above the Michael Almanzar level of Double-A prospect: if he keeps hitting (and he has a .316/.381/.474 line with Portland) then Boston would likely lose him if he went unprotected. They lost Almanzar to the Orioles last December, and he only hit .268/.328/.432 at the same age. 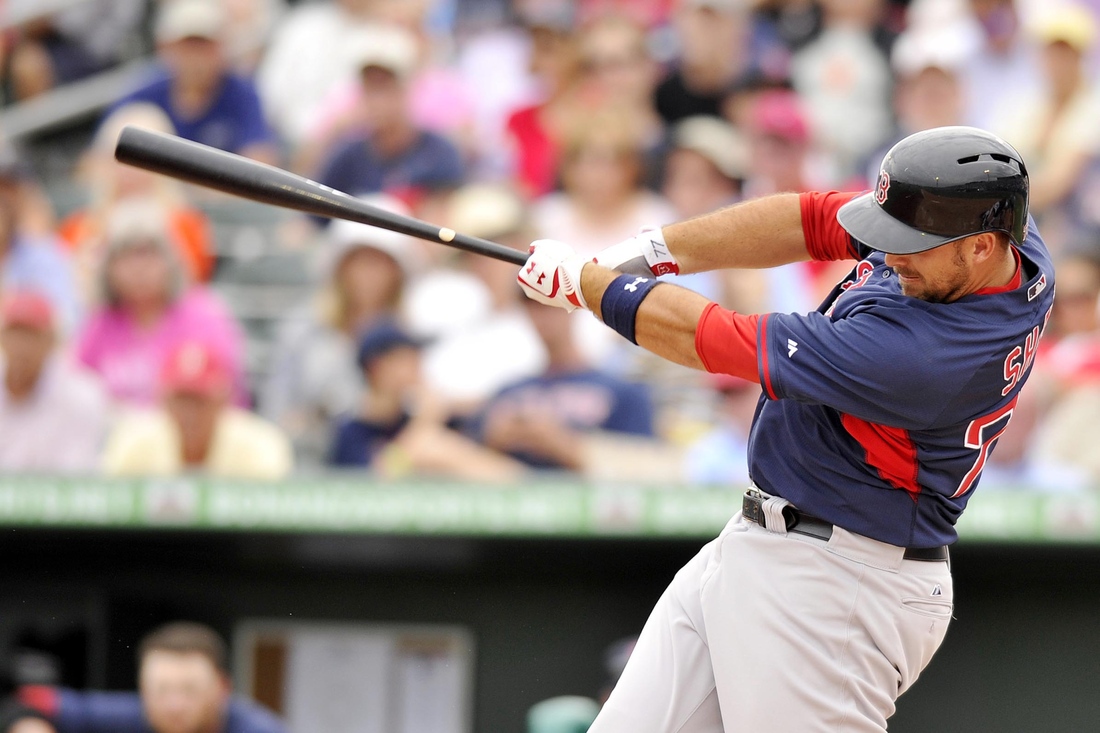 Travis Shaw is the fourth who might see a 40-man spot, for much the same reason Alex Hassan was placed there prior to 2013. Shaw has scuffled at Double-A in the past due to being overly passive, but he might finally be converting some of that passiveness into legitimate plate discipline. At present, he's hitting .299/.395/.495 with more walks (16) than strikeouts (12), and this despite an April in which his approach with two strikes was lacking. Considering Shaw's power, potential on-base percentages, and the lack of first base prospects both in the organization and league-wide, they would absolutely lose him to the Rule 5 were he to keep hitting as he has been to this early point in 2014.

That's four potential new entries on the 40-man, and that's without considering that someone like Mookie Betts could play their way into Boston much like Xander Bogaerts did a year ago. Or without getting into the players who could be dealt in advance since they aren't quite worth a 40-man spot in Boston but could be useful elsewhere.

How long is Felix Doubront's leash?

With Felix Doubront struggling to start his 2014 campaign, how long should the Red Sox wait until they take him out of the rotation?

Making sense of Bogaerts' struggles with men on

Xander Bogaerts has, overall solid numbers at the plate this season but has struggled with men in scoring position. Manager John Farrell, hitting coach Greg Colbrunn and Bogaerts have a couple of ideas why.

How long is Felix Doubront's leash? Making sense of Bogaerts' struggles with men on

Miguel Celestino, Mickey Pena, Noe Ramirez, and Keith Couch all have potential careers in the majors as relief pitchers. They all have their warts -- Celestino's success might be due to velocity Double-A bats can't handle but big-league ones can, for instance, while command is a concern with Ramirez and neither Couch nor Pena can blow it past opponents. Potential is all some teams are looking for, however, and all four of these arms are at Double-A as of right now and are due for a 40-man spot to avoid the Rule 5. By themselves, they probably aren't going to generate much interest, not unless some hopeless team decides they want half of their 2015 bullpen to be untested Double-A arms. Packaged with someone like Coyle, though, or some low-level pieces who aren't 40-man concerns just yet, could create an interesting package for the right club. This is also a space for, say, Lavarnway, should someone be willing to take a chance on him, or maybe the likes of Anthony Ranaudo, since there is a good chance one of Boston's upper level arms will be dealt rather than simply stuck in Pawtucket again in 2015. It doesn't have to be Ranaudo, but it's the idea that matters.

The Sox did something like this in 2011 (minus the mid-rotation-caliber prospect) in order to acquire Erik Bedard from the Mariners before the trade deadline. Boston sent Tim Federowicz and Stephen Fife -- two potentially useful players who the Sox did not have 40-man room for -- to the Dodgers to get them involved in the three-way deal that netted Boston Bedard. They also traded Chih-Hsien Chiang, who was tearing up Double-A at the time but has done little since, to the Dodgers for the same reason Fife and Federowicz were expendable.

Being dealt doesn't mean the Sox see no value in a player. All four of Celestino, Couch, Ramirez, and Pena could be useful in Boston. The fact they need a 40-man spot to avoid being pilfered probably sets them up for a trade sometime this summer, though, or early in the offseason. It's just May, and the upper levels of the minors house loads of depth around the diamond, so it's unclear what the Sox would need or be able to get in a housecleaning deal. It's pretty clear who would be part of one from the Boston side, however.