How long is Felix Doubront's leash?

With Felix Doubront struggling to start his 2014 campaign, how long should the Red Sox wait until they take him out of the rotation?

Share All sharing options for: How long is Felix Doubront's leash?

A little more than a month into the season, Boston's 2014 has been one big frustrating lack of consistency. At times, they've looked like the team that went all the way last year, but those have been small spurts. Mostly, it's been lack of offense and shaky defense. Of course, with it only being May seventh, the time to truly panic isn't really upon us, as the sample is still small enough where there is too much noise to make real conclusions.

At the same time, the 33 games they've played still represents 20 percent of the season, and they still count towards the end result. In short, the poor early performances could have a big impact in September. It's this time of year when it becomes a struggle to decide when is the right time to act on some poor starts and make some serious changes, especially for a team like the Red Sox who figured to be contenders this season. One such example of this revolves around Felix Doubront. How long do they allow him to struggle as much as he has before they lift him from the rotation?

A team usually has to prove itself worthy of investment before receiving one. The 2014 Red Sox might be an exception to that rule.

This 2014 season has not been kind to the 26-year-old lefty, to say the least. He's racked up 35-1/3 innings in seven starts, averaging just five frames every time he takes the mound. And he hasn't impressed anyone in those times out there either. To this point, he has an ugly 5.09 ERA with a less-than-encouraging 4.96 FIP to go along with it. In short, it's not a slow start that can be chalked up to bad luck, especially considering the .297 batting average on balls in play he's allowed is 14 points lower than his career mark. While his walks are a shade down from his typical numbers, Doubront's strikeout rate has fallen almost six points below his career rate, and he's allowed more home runs on a per-inning basis than he ever has. Even last night wasn't as great as his one-run performance may suggest, as he only made it through 5-1/3 innings and threw 97 pitches to do it. Not a lot has gone right for him thus far.

Of course, Doubront has always been the source of much frustration since he became a full-time member of the rotation in 2012. Though he's shown flashes where he looks like he can be a highly productive number three starter, he's never been able to live up to that potential on a consistent basis. The biggest knock on him has been his inability to make it through the whole season strongly, as he continuously falls off towards the final month of the year. In the last two-plus years, he's thrown 353-1/3 innings in 64 appearances (two of them out of the bullpen), and has a 4.69 ERA (90 ERA+) and a 4.17 FIP in that time. Doubront's flashes of potential have been reason enough to keep throwing him out there, but eventually it's time to accept that the potential will never be reached. 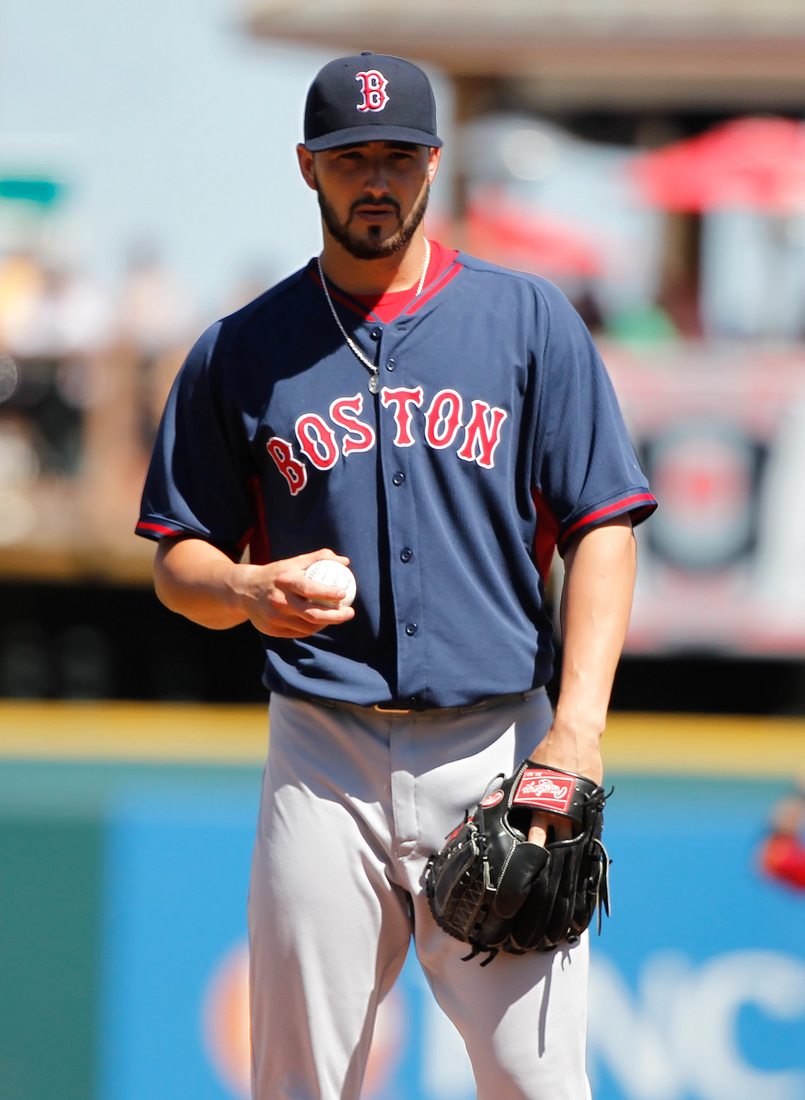 It's just a matter of when the Red Sox need to decide they're ready to make that leap in deeming him replaceable. Obviously, a big reason they may feel the need to act on that a little quicker than they normally would is that they have a bevy of young arms in Pawtucket that would like to earn a place in Boston's rotation for the long-term. If Doubront was removed for the rotation, one would imagine that Brandon Workman would be the first person to get the call, since he had such an impact last season, and has already appeared on the active roster in 2014. He's struggled a bit since being demoted to AAA, though, with a 4.95 ERA in four starts there. Another guy they could consider would be Rubby De La Rosa, who has been very impressive to start the season. In his first six starts, he has a 2.48 ERA, largely due to a big uptick in ground balls, and a general lack of hard contact. The former Dodgers prospect has yet to allow a home run in 2014. The other young option would be the other prospect received from Los Angeles in 2012, Allen Webster. It's been a bit of a strange season for the 24-year-old, as his strikeouts are way down from his normal rates, but he's still managed to put up a 2.77 ERA. He is also viewed by some to have the highest upside of any of the Pawtucket starters.

There is also the possibility that they would forego all of those options and instead decide to take Chris Capuano out of the bullpen, where he has looked very good this year, and put him back to his familiar role as a starter. Whichever way you look at it, though, there are plenty of options knocking on the door should Felix Doubront fail to remain in the rotation, and that's without even including Matt Barnes and Anthony Ranaudo.

Since it's only been seven starts, it would be tough to pull Doubront out of a starting role at this point in the season. He showed last season that he can recover from a slow start, even if that ended up going downhill towards the end of the year. However, if he still looks as shaky as he's been thus far a few weeks from now, it's time to start thinking about alternatives. I would give him three more starts of pressure-free outings, and if he's still shaky, I'd pick the hottest pitcher from Workman, Webster and De La Rosa and line their starts up with Doubront's. At that point, after a couple more outings I'd pull the plug. To put it more simply, if his numbers haven't improved by the end of May or beginning of June, that'd be the time to try out another option in his spot.