A Red Sox Fan and His Lawnmower: A Love Story

Share All sharing options for: A Red Sox Fan and His Lawnmower: A Love Story

During Tuesday's telecast, NESN featured a photo of a lawnmower covered in Red Sox stickers from Twitter user @thewillhaines. This was a nice lawnmower, and we like the type of person who sends photos of their  nice  lawnmowers to NESN. We also wanted to settle Don Orsillo and Jerry Remy's vicious argument about how large his yard was likely to be -- because we are dedicated to the truth -- so we reached out and asked some questions which Haines was nice enough to answer. The answers MAY SURPRISE YOU.

Or not! But you'll learn something. This is the story of a Red Sox fan Will Haines, a middle school librarian who lives outside Rochester, New York, and grew up on Long Island. "You may be thinking, 'Why am I a Red Sox fan?'" he told me. "It stems from my Dad, and the fact that as a kid he was an avid Brooklyn Dodgers fan. His mom used to put him on the train to go see games -- pin a note to his lapel -- when he was just a tyke.  Then, of course, the Dodgers moved to California. Heartbroken, his uncle took him to Fenway via the Orient (Cross Sound) ferry. (ed.: This ferry goes from Orient Point, Long Island to New London, Connecticut.)  The rest is history.  I grew up a Red Sox fan.  Yaz is from the North Fork of LI, as you may know."

Mo's new book settles the age-old debate once and for all.

Here's the rest of it:

Why did you send the pic to NESN?
I sent the picture to NESN because I thought it was different.  I had yet to see a photo of a lawnmower while watching. I had the photo, so it was easy to post, and I wanted to show my fanaticism.

How did you find out they would use it?
I didn't find out till you contacted me. So you definitely have to watch if you want to see your photo.

How big is your lawn? (To answer Orsillo and Remy's question.)
I looked it up -- my property is just under a half an acre. 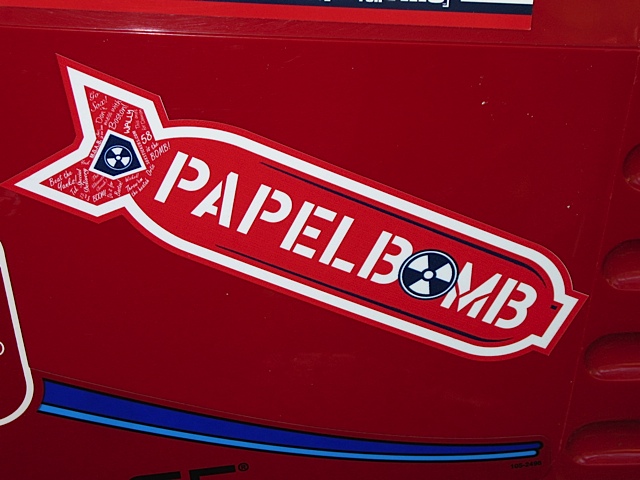 The red riding lawnmower was a gift from my dad as a housewarming gift (in 1999) and I immediately realized it needed some Red Sox stickers.  I started small,  then came across a website selling pennant stickers and retired number stickers, and I bought the whole set. I have added stickers as years have gone by, and I'm starting to run out of room. I havestickers they give out at the gate and my most recent sticker, of course, is a Boston Strong sticker.

Do you have a favorite sticker? What makes it different than the others?
I still have a "Papelbomb" sticker on it -- I was reluctant to leave it on after his departure, but I refrained from removing it.  He was my favorite player when he was with the team.

Who's your favorite player?
My current favorite player has to be a tie between Pedroia & Big Papi. But I love all the guys who wear the uniform: Gomes, Bogaerts, Victorino, Uehara. I watch them every day. I go to Fenway games at least once a year, and was at the pennant-clinching game last year, which was beyond awesome.

Who would win in a fight, Orsillo or Remy?
You would think at first thought that Remy would be the favorite, but I've seen Orsillo take batting practice. It would be a close one, and I think Orsillo has the longer reach. (So, Sox fans what do you think: Who would win the fight?)

Thanks again to Will Haines, @thewillhaines, for being a good sport. Here's his pretty great video of Victorino's grand slam against the Tigers last year. Yes, that's him screaming: