A team usually has to prove itself worthy of investment before receiving one. The 2014 Red Sox might be an exception to that rule.

Share All sharing options for: 2014 Red Sox a perfect fit for a trade

Through the first month of the season, 2014 has looked a lot like 2012. The Red Sox have struggled to establish any sort of momentum, floating just under .500 ever since they fell to 2-3. The roster issues are different now, but the result is the same: the Red Sox look like a team in need of help.

In 2012, that help was something most of us simply did not want. For many a Red Sox fan, the approach of the trade deadline brought not hope, but fear. This was a team coming off a catastrophic collapse in 2011 ending with one of the worst PR disasters in recent memory. Fans were upset, the media smelled blood. Simply put, the fear was that the Sox would put appearances ahead of baseball. That the idea of the first truly bad season in Boston under John Henry and co. would push them to make a desperation trade and just dig the hole deeper.

Of course, they did not. Instead the Red Sox waited for the Dodgers to come calling in August, dumping their burdensome contracts on the new financial superpower and unloading two years of baggage in the process. They turned that freedom into a World Series championship 14 months later. It's still hard to say whether that classifies as a miracle or a masterstroke. Probably both.

Through the first month of the season, 2014 has looked a lot like 2012. But if the next couple months play out in similar fashion, this time the trade deadline might call for a very different approach.

What makes any given team worthy of further investment? There's certainly more to it than just record. The 2012 Red Sox entered the All-Star break at 43-43. With two wild card spots available, a .500 record 86 games in does not signify certain doom. But looking beyond the record, the Red Sox were one troubled team. The lineup was being carried by David Ortiz, a career year from Cody Ross, and a rookie in Will Middlebrooks. Dustin Pedroia was struggling with injury, Adrian Gonzalez was shockingly mediocre, and Carl Crawford hadn't so much as taken an at bat.

Meanwhile, on the mound, the bright spots were a semi-resurgent Clay Buchholz and Franklin Morales. Buchholz had started terribly, but was by that point producing reasonably good results. Morales was pitching surprisingly well out of the rotation, but had started to show signs of wear. Otherwise, Josh Beckett, Felix Doubront, and Jon Lester were giving the Red Sox next to nothing. Let's not even get started on Daisuke Matsuzaka, Aaron Cook, or the failed Daniel Bard experiment. No one addition could have taken that team and made it a strong contender.

More importantly, the Red Sox were a team headed in the wrong direction. There were some players who might be expected to bounce back in 2013, but their best window to win with Gonzalez and Crawford was supposed to come in the first few years. With the payroll restricted by massive contracts, there was also little expectation that the Red Sox could make significant improvements in the offseason. Adding major league talent via trade, then, would have been fighting against the tide, and doing so at the cost of resources that could help completely turn that tide in the future.

There's still a long time to go before the 2014 trade deadline, so there's plenty of opportunity for things to go very wrong (or very right). But at least in terms of the larger picture, none of this is true for the 2014 Red Sox.

Their rotation issues are not so severe. Jon Lester has been fantastic,  John Lackey and Jake Peavy are no slouches, and Clay Buchholz might even be settling in. The Sox also boast quite a bit more rotation depth than they did in 2012. The lienup is not quite as strong; Mike Napoli's bat is not the superlative that Ortiz' was, and the Sox are still waiting for Dustin Pedroia and Shane Victorino to get going. Still, as a unit the team has a perfectly average 100 wRC+. 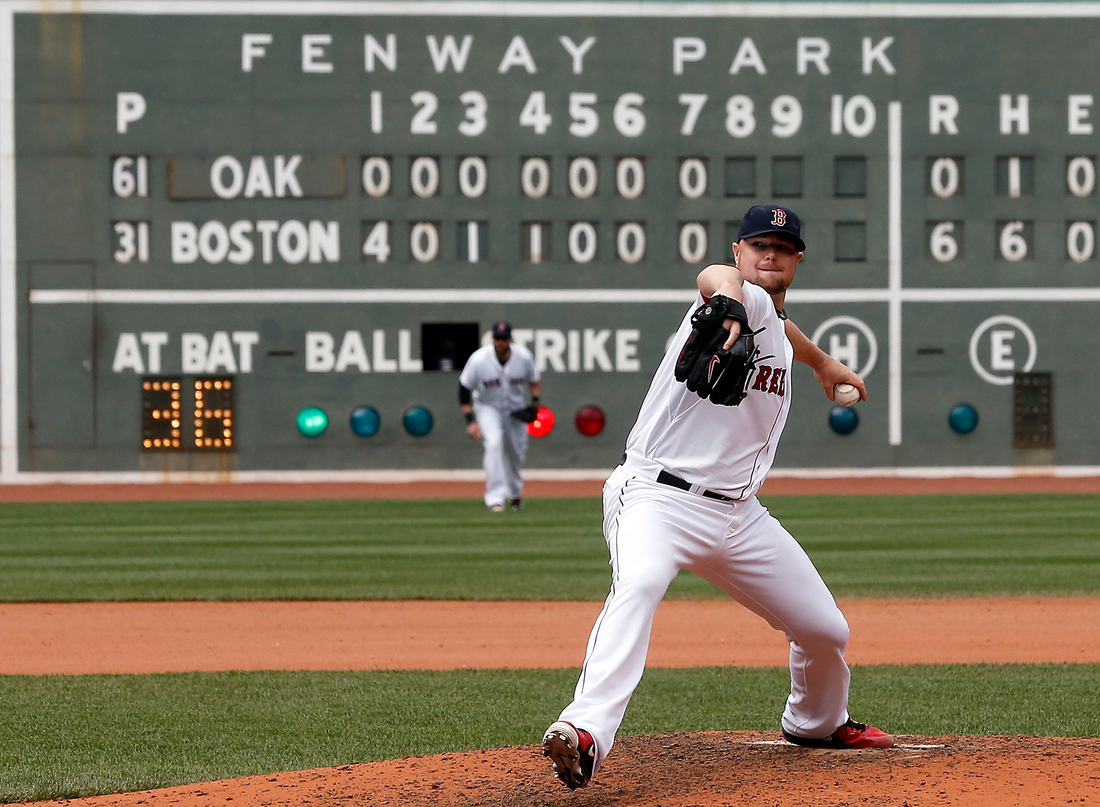 In Jon Lester, the 2014 Red Sox have something the 2012 team never did: an anchor for their rotation.

Are the Red Sox just one piece away from being contenders? A big bat in left field, maybe? It's hard to say this early in the season, but between their performance-to-date and their minor league depth, they certainly seem more capable of turning a corner than the 2012 Red Sox.

Again, though, what's most important is what a trade could do for the Red Sox going forward. In 2012, a trade would have actually hurt the Red Sox in the future, further burdening the team financially while giving away what few resources they had to fix that situation. These current Red Sox, however, are a team on the rise. It can be hard to see that since they're coming off a World Series season, but it's true. There's a new core of young players to build around. The only large contract on the team belongs to the 30-year-old Dustin Pedroia, The upper minors are still stacked, with Mookie Betts threatening to replace Xander Bogaerts as "the next big thing" immediately after his graduation.

What, then, would bringing in help mean? If said help is only around for the last few months of the season, well, not all that much. Presumably, though, the Red Sox would not be giving up all that much for a rental, making this a bit of a non-issue. But if the player in question is under contract for a few years to come, they could very well be a key part of that "next great Red Sox team," whereas in 2012 they would just be part of "the next mediocre iteration of the 2012 Red Sox."

The meteoric rise of Mookie Betts

A lot can change over the course of a few months, and certainly it's impossible to say who might be on the market when July rolls around. For now, though, we can at least look at the bigger picture. Ideally, a team would be able to put max effort into winning every single year without effecting future chances, but that's not realistic. There's something to be said for pushing all-in when the time is right, but generally speaking it's worth it to sacrifice some probability of winning now in order to significantly increase the likelihood of winning later.

For the Red Sox, though, the two do not have to be mutually exclusive. They are a team built to contend now and in the future, and between a stacked minor league system and a wide-open payroll, a significant trade could go a long way towards improving their chances in both time frames. Something to look forward to, even if the season continues as it has so far.