Clay Buchholz has obviously had a disaster of a 2014 season, but we aren't too far removed from two other similar meltdowns.

Share All sharing options for: Comparing Clay Buchholz's struggles to Lester's and Lackey's

As a sports fan, one of the main things one needs to get used to is being wrong. We all have our own opinions about a wide range of topics, and all of us are wrong, a lot. An example of this in my case so far this season has been Clay Buchholz. You see, I came into the season figuring him to be the best starting pitcher on the Red Sox when he's healthy. Of course, we all know how that has worked out. Buchholz has been a special level of bad this season, performing not just like one of the worst pitchers in Boston, but one of the worst pitchers in the league. Luckily, this is an area the Red Sox have some experience in, as this is not the first time one of their top pitchers has struggled mightily through a big stretch of a season. It's only been a few years since John Lackey was one of the worst pitchers in the game in 2011, and Jon Lester imploded in 2012. We've all seen how they've bounced back from those years, so how do Buchholz's struggles compare to their's?

We'll start with the current issue, and just how bad Buchholz has been. He's made ten starts this season, and is averaging just five innings per start. In that time, he has a 7.02 ERA, easily the worst ERA in baseball among pitchers with at least 50 innings. Although his 4.81 FIP calls for a whole lot of regression, a) that's still not a very good FIP, and b) it's not at all that simple. FIP tends to assume that batting average on balls in play is simply a luck stat, and a pitcher that has allowed a .384 BABIP (like Buchholz) is just stuck in a rut of bad luck. Clearly, if you've been watching here, that's not the case. Buchholz is letting up all of these hits because of a barrage of hard-hit balls that wouldn't be described by anyone as unlucky. As a result he's allowing more home runs than ever before while his groundball-rate has fallen to a career-low.

On top of that, he is striking out less batters than he ever has while walking more than he has since his second season in the majors. Finally, his velocity has completely fallen off, as his average fastball is down to just 91 miles per hour. In fact, his velocity has gone down on every pitch besides his changeup, which has gone up. At his best, there is about a twelve MPH difference between his fastball and changeup. Right now, that difference is around eight MPH. This has led to a seven percent swinging strike-rate, a full two percent lower than his previous career-low. Put simply, Buchholz's season has been bad in just about ever aspect.

Looking at Lester's 2012, there's one thing the now-extension candidate's rock bottom season already has Buchholz beat with: durability. Even at his worst, the left-hander has proven he can throw 200 innings, as he avoided the kind of DL-stint that Buchholz currently finds himself starting. Beyond that, 2012 was a lot of bad. He finished the year with a 4.82 ERA, and a 4.11 FIP. His strikeout-rate had fallen by seven points from just two years previous, and he was allowing more home runs than he had in five years. Like Buchholz, Lester was allowing a ton of hard contact, though he saw that more in line drives rather than a lack of ground balls. The thing with him, though, was that his stuff didn't fall off too badly. His swinging strike-rate stayed consistent with his career path, and his velocity didn't fall off at an alarming rate. Instead, he just couldn't locate his pitches like he's been able to in every other part of his career. Lester's 2012 was bad, but it wasn't the same kind of all-around bad as Buchholz's 2014.

The better comparison is probably to that of John Lackey's 2011, the season most synonymous with complete meltdown in recent Red Sox history. After an adequate but still somewhat disappointing season for the big-money pitcher in 2010 (his first season in Boston) , the former Angel completely imploded in 2011. He finished the year with a league-worst 6.41 ERA in 160 innings, and his 4.71 FIP didn't really help matters. His strikeouts were way down, his walks way up, and he was being hit hard all over the field. Sound familiar? He also saw a steep drop off in his groundball-rate, and a dip in stuff. His swinging strike rate stayed well below his career-norms, and he was laboring on the mound, taking longer between pitches than he ever had before, and ever has since. Like Buchholz this year, Lackey's 2011 was all-around terrible. 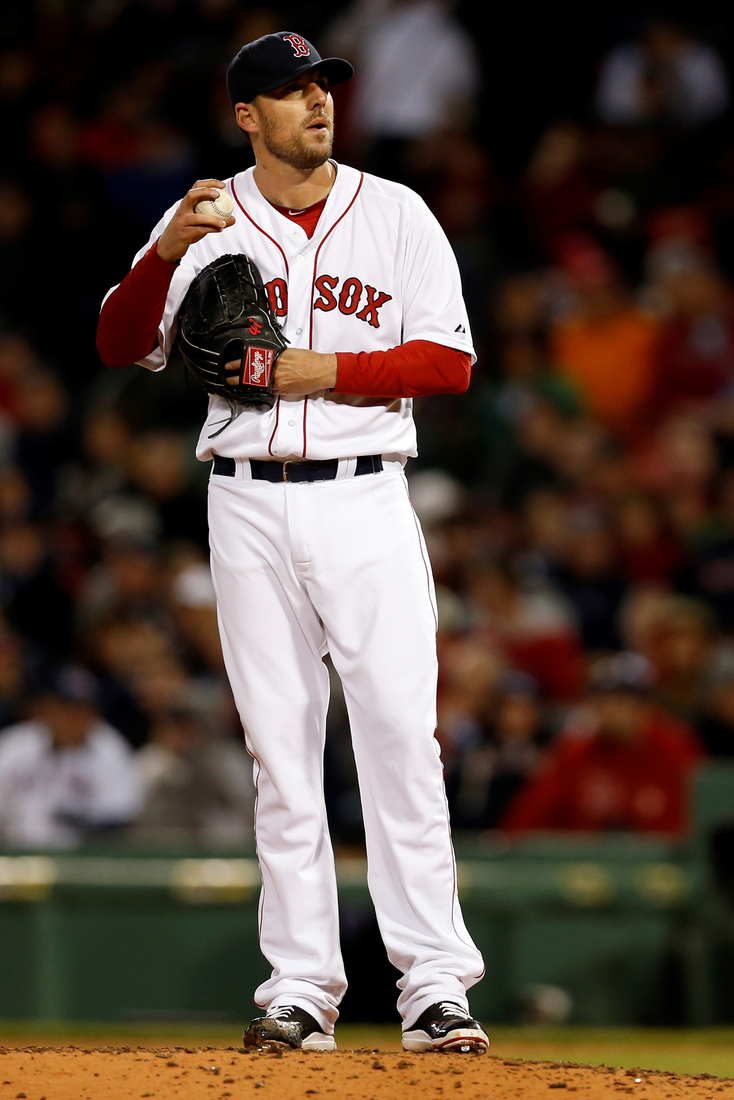 While Jon Lester's 2012 season was severely disappointing, it's still a big step up from what Buchholz has done this season. The much better comparison would be to John Lackey, when he hit rock bottom a few years ago. In both cases, the peripherals were completely out of whack, they were unable to induce the ground balls they always had before, and hard contact was expected with every at bat. Both pitchers saw themselves work at a slower pace than when they're at their best, and they both just stopped fooling hitters. Now, there are two ways to look at the comparison. The glass-half-empty version is that Buchholz could be seriously injured, as Lackey missed the entire 2012 season after undergoing Tommy John surgery. Of course, it's dangerous to speculate about a potential injury this serious, despite how similar the seasons have been. Looking at it through an optimists eyes, we see that Buchholz isn't a lost cause. It took a surgery and a season off, but John Lackey is now the second best pitcher on the team, and arguably the most dependable. Many people are completely done with Buchholz, but both Lester, and most notably John Lackey, have come back from similar struggles. There's no reason Clay Buchholz can't do the same thing.