Andre Ethier trade pretty much the worst idea ever

A Red Sox trade for Andre Ethier would be bad. Really bad.

Share All sharing options for: Andre Ethier trade pretty much the worst idea ever

The Red Sox are in dire straits, so perhaps it's not surprising that the search for a savior is on. Andre Ethier was named as one candidate for that role earlier today, which should serve as both an indication of how desperate the situation might be, and just how dangerous such a search can be.

There is a scenario in which trading for Andre Ethier makes sense. Marc detailed it in the piece linked above, and it involves a lot of conditions. If Ethier rebounds from early season struggles, if the Dodgers still want to trade him in that situation, if they will eat a significant portion of his contract, if they will except relatively small returns and of course if the Red Sox can stop losing every single game they play and actually make their way back into contention, then maybe we've got a deal.

What I want to drive home is just how important it is that all those conditions are met, and just how awful the idea of trading for Ethier is if they are not.

The Red Sox are currently 20-29, the losers of ten straight games, and have only just now lost Mike Napoli and Shane Victorino to the disabled list. The only reason we have to suspect things will get better in the immediate future is because it's really, really difficult to lose every game you play. Still, there is very little reason to expect the Red Sox to start playing winning baseball again for a couple of weeks, particularly given that they have to face the Braves and Tigers during that stretch.

It seems generous to give the Red Sox credit for six wins in their next thirteen games given their current situation, but let's do just that. That leaves them ten back of .500 at 26-36 with 46 games left to play before the trade deadline.

Just to get back to .500 before that point, the Red Sox would have to go 28-18. That's .609 baseball, which is slightly better than even the 2013 Red Sox managed. Consider that at no point heading into the season were these Red Sox expected to be as good as the 2013 version, then apply what we have learned in the past two months. That's a pretty far-fetched scenario just to get to the point where any investment could be considered worthwhile.

Even in that situation, though, is Ethier the right man for the Red Sox? Marc makes the point that, given Ethier's contract situation, he won't just have an impact on the 2014 team, but is that a good thing? After all, Ethier is a 32-year-old corner outfielder who, based on the first couple months of this season, seems to be headed in the wrong direction. 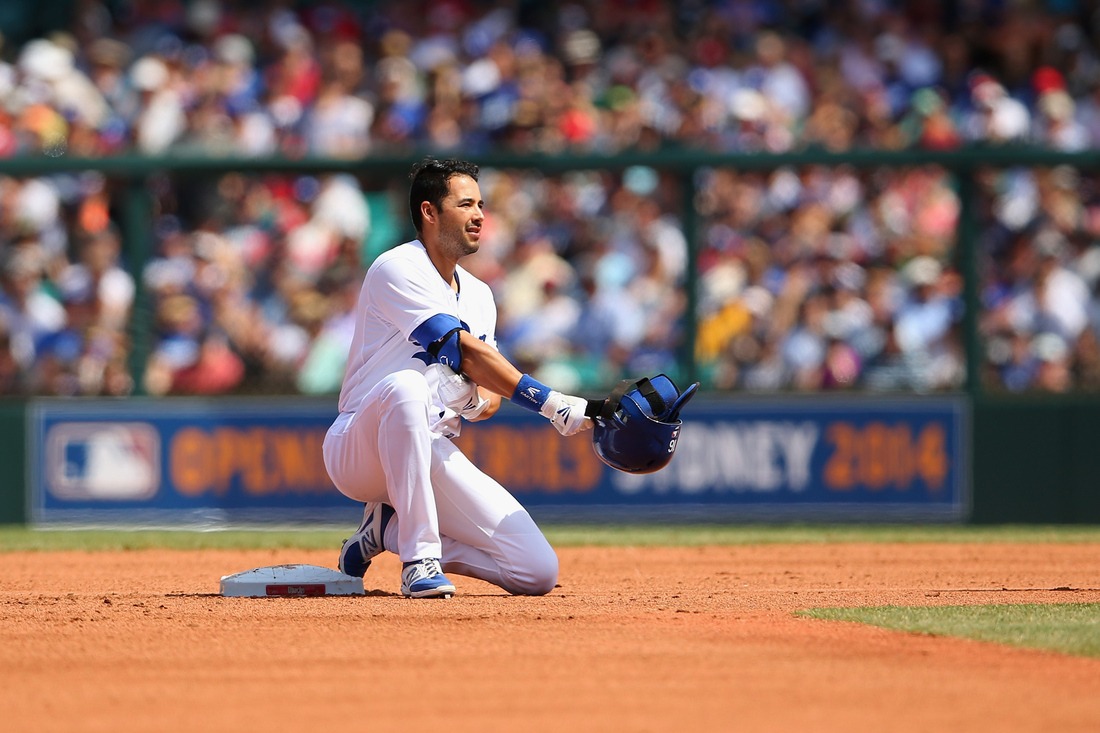 At his best, Ethier is a fine player. Not a great one--Fangraphs and B-Ref have had him pegged as a three WAR sort for the last few seasons. But there's not a lot of reason to expect Andre Ethier will be at his best. The last three years have represented a clear downturn in his offense, and at the moment 2014 looks like it's going to be another step back. Even if Ethier manages to bring his numbers up before the deadline, though, the Red Sox have to consider what he's likely to do in the future, and if that's worth $17 million a year for the next three years.

Then answer, I would say, is pretty clearly no. After 2012, the Red Sox gave a 32-year-old Shane Victorino $39 million for three years. Victorino was coming off one of the worst years of his career, but even with severely diminished offense the Hawaiian outfielder's glove helped bring him up to just under three WAR. That essentially means that Shane Victorino's baseline was Ethier, and his upside (as seen in 2011 and, ultimately, 2013) was much higher. Even if we consider Shane Victorino to be a clearly good deal for the Red Sox (and many viewed him as anything but at the time), it's hard to countenance dropping $51 million for three years of a player whose upside is the same as Victorino's baseline was, and whose floor is far lower.

Now, keep in mind this is ignoring his option year and assuming that the Dodgers would ask for no prospects in compensation if the Red Sox were willing to eat the full deal. It's pretty hard to imagine that they'd be willing to engage in a partial salary dump (eating some of his contract and getting nothing significant in return) if Ethier has rebounded at all, and it's even harder to imagine that Ethier will even be worth a fraction of his salary in the future if he hasn't.

Before 2014 began, Ethier was already a shaky trade candidate. The feeling was that if the Dodgers ate some money then the Red Sox could afford to put a little financial burden on their future teams for the benefit of a team that maybe needed one extra push to get back to the levels they were at in 2013.

Since then, Andre Ethier has put his value in question, and the Red Sox have made it entirely questionable whether they're worth any investment at all. If this trade was questionable before, it's absolutely insane now. It would be hurting teams much more likely to win than this one to bring a player who, at his best, could not transform a mediocre team into a good one. And we still have no proof that the Red Sox even rise to the level of mediocrity.

Ethier, if he rebounds, is a luxury target for a good team that, not having the best outlook in future years, are interested in going all-in on 2013. The Boston Red Sox are basically the exact opposite of that. And if in some act of desperation they ignore that fact, they could regret it for years to come.

The good news: they probably won't. We've seen Ben Cherington in a similar situation before back in 2012. The Red Sox were in bad shape, and given that it was his first year on the job and coming off the P.R. nightmare that was 2011, the heat was on far more then than it is now. He didn't make the mistake of a desperation move then, and there's no reason to think he will now.