It's time for Red Sox to turn to Pawtucket's rotation

The Red Sox have two starting pitchers and three train wrecks. It's time to make use of their much-touted depth.

Share All sharing options for: It's time for Red Sox to turn to Pawtucket's rotation

Tuesday night saw the Red Sox drop their fifth straight game. It was a fine example of an all-too-common occurrence for this team: a game that was well out of hand from very early on thanks to a terrible performance from a starting pitcher.

The starting rotation is, simply put, in absolute shambles. As with last year, the Red Sox can rely on Jon Lester and John Lackey to give them a chance just about every time they take the mound. Unlike last year, once we're past those two, it's game over.

Clay Buchholz, who spent half of last season as the league's best pitcher, is spending half of this year as the league's worst. Only Kevin Correia has a higher ERA, and if Buchholz' peripherals suggest he's a victim of bad luck, that's probably just a symptom of Buchholz' complete inability to utilize his off-speed offerings. When everything is a fastball or a variant thereof, the walks may not exactly pile up, but the hard hit balls do.

Felix Doubront, who spent three months last year as one of Boston's most consistent starters, is looking like anything but a starter right now. Whether it's because his repertoire is incapable of fooling anyone twice, or because he simply runs out of gas (a problem that has plagued Doubront on a larger scale in seasons past), Doubront is fine in the first couple innings, and then an absolute train wreck from the third onward.

Then there's Jake Peavy, who walked a tightrope with walks and homers in the first month of the season, but has fallen right off in the past week. Two bad games from a pitcher like Peavy would not be so concerning if they weren't just confirmation of what we knew all along: a pitcher cannot maintain a low ERA with a 7.17 K/9, 4.50 BB/9, and 1.50 HR/9. 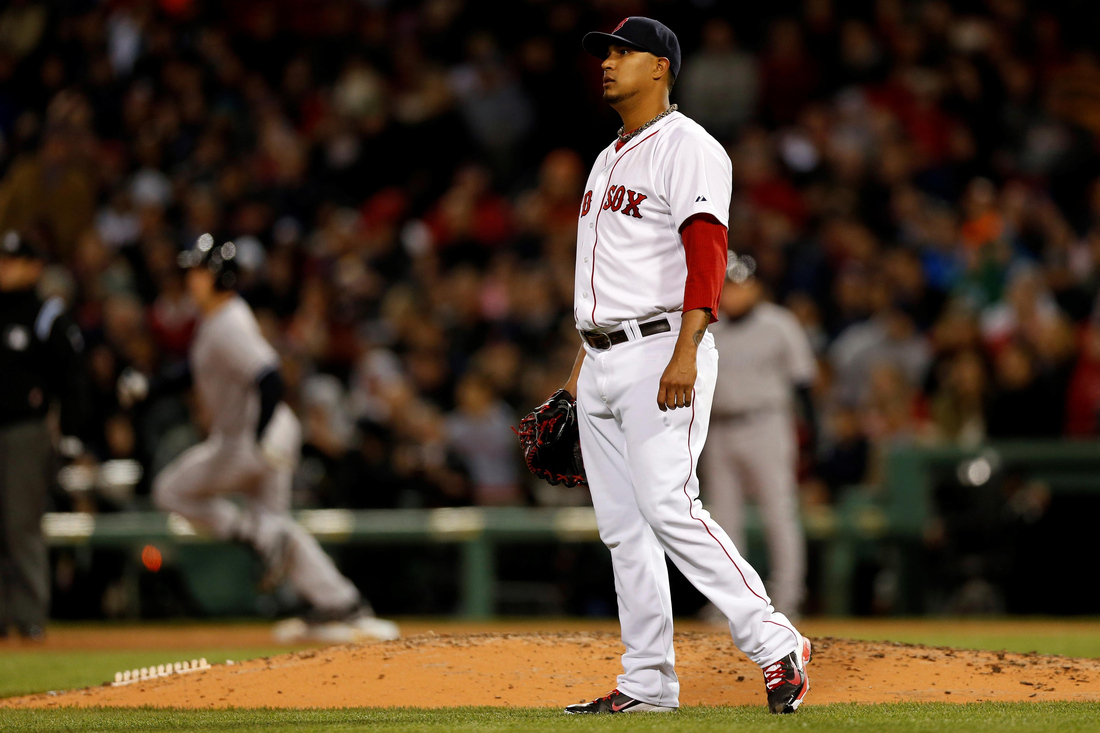 There are no signs that any one of this trio is headed in the right direction, either. Doubront was the only one who showed any signs of life recently, producing his first good start of the year last week, but on Tuesday he followed that performance up with one of his worst of the year, and ended it by leaving with shoulder fatigue. Hardly a shocker from a pitcher who, struggles after the first two innings.

Boston's offense isn't excelling, but at least there's some sort of a plan there. Dustin Pedroia, Shane Victorino (struggling though he is), David Ortiz, Mike Napoli, and Xander Bogaerts is a reasonable core. The addition of Stephen Drew will help to offset the hilarious .586 OPS the team's third basemen have provided so far this year. The catching situation is a mess, Jackie Bradley Jr. has fallen off the map in May, and it might be time to bring the Grady Sizemore experiment to an unceremonious end. But almost every team has issues at the bottom of the order, and the Red Sox seem likely to have at least a little more than half of a solid lineup in place.

The problem is that 60% of their games can be damn near penciled in as a loss before the first pitch. And all-too-often you can switch to ink before the fifth inning is over. Simply put, the Red Sox need help. And you know what? They have that help.

It's time to call on Brandon Workman and Allen Webster. There are other options behind them, but for now, let's start with the two most promising. Workman's numbers are inflated a bit by some odd homer-filled games, but he's piled up a 34:10 K:BB and hasn't really been getting hit all that hard outside of those strange nights. Beyond that, he's the man with the most recent major league success, having more than earned his shot with his brief stint in the 2013 rotation.

Webster, of course, brings with him more bad memories than anything else for Red Sox fans. But he's been Pawtucket's top performer so far, and if he didn't look too good in terms of peripherals early in the season, May has brought with it a sea change in that area. At 24-years-old, Webster is at the age where he should actually be expected to contribute at the major league level, rather than just show us brief flashes of unbelievable stuff while getting knocked around ala 2013.

Whether it's Workman and Webster, or one of Ranaudo, De La Rosa--even Matt Barnes--the Red Sox need to start taking advantage of their fantastic starting pitching depth. Because if the performances of Peavy, Buchholz, and Doubront aren't enough to warrant a change, then nothing short of debilitating injury will be.