Shortstop Xander Bogaerts is very receptive to the idea of a contract extension with the Red Sox. What would a potential extension look like?

Even before he reached the majors many clamored for the Red Sox to sign shortstop Xander Bogaerts to a contract extension. The fact that Scott Boras represents Bogaerts has dissuaded some from believing that an extension is in the cards for the 21-year-old, given Boras' tendency to bring his top clients to free agency. Through a source with knowledge of the situation, though, Over the Monster has learned that Bogaerts is very receptive to the idea of a contract extension with the Red Sox, something that would deviate from Boras' philosophy.

Bogaerts has displayed loyalty to the Red Sox in the past, seen when he and his brother Jair signed with the team out of Aruba at the age of 17. Despite having offers from other teams, the Bogaerts brothers decided to sign with the Red Sox because they were the first to offer both of the brothers contracts.

"Once you get into conversation," Cherington said, "those contracts are always some sort of risk-sharing arrangement where the player is given a guarantee, security and will perhaps compromise a little bit on the upside."

Bogaerts, who wouldn't be eligible for arbitration until 2017 and free agency until '20, may have no interest in discussing an extension. But if he does, and he has a strong '14 season, a match would make sense.

"We're not considering that right now with anyone but certainly wouldn't rule it out," Cherington said.

Bogaerts is interested in at least hearing what the Red Sox have to offer in terms of a long-term extension. The Red Sox extending Bogaerts would fall in line in with the organizational philosophy to lock up young, core players. The team previously did this with Dustin Pedroia (six-year, $40.5 million in December, 2008 at age 25), Jon Lester (five-year, $30 million in March, 2009 at age 25) and Clay Buchholz (four-year, $30 million in April, 2011 at age 26). While locking Bogaerts up right now would be much earlier than the previous three contracts, he also appeared in the majors two years earlier than this trio, all of whom debuted at age 22. 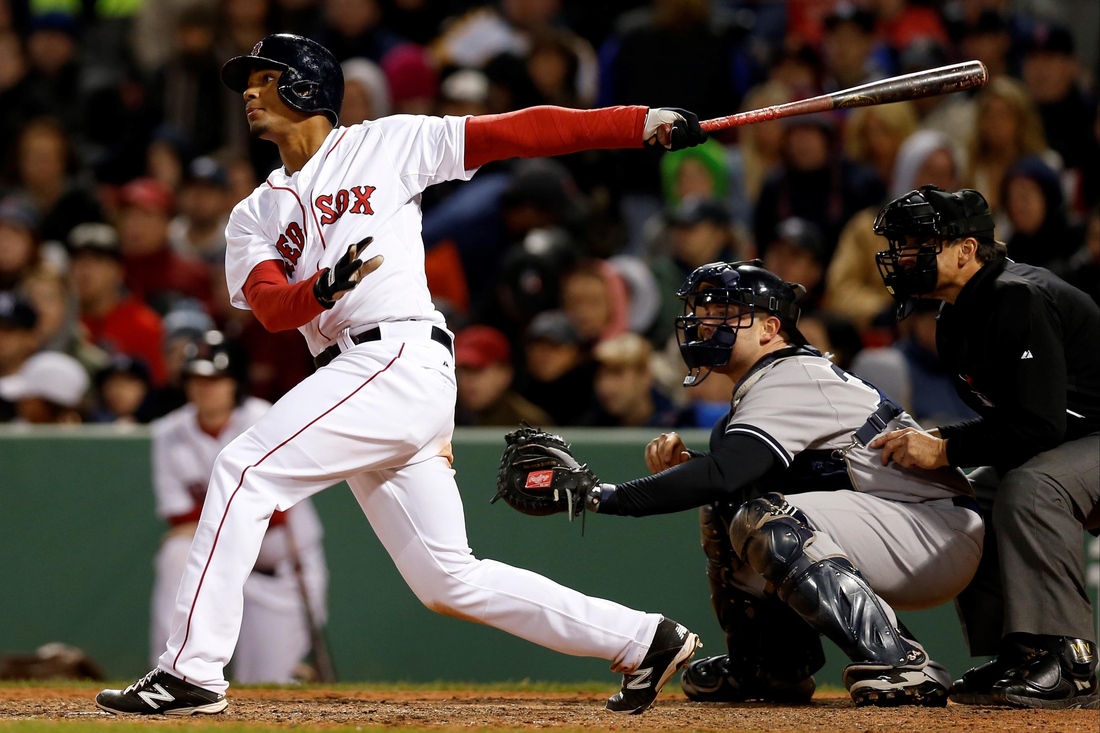 A good framework the Red Sox could probably use for a Bogaerts extension is the deal the Rays gave to third baseman Evan Longoria six games into his career in 2008. The deal was a six-year contract worth up to $17.5 million with a one year option for 2014 and a two-year option for 2015-2016 that would have made the deal worth $44.5 million over nine years. Here is the salary breakdown of that contract.

Longoria opted for the security of a long-term contract in exchange for the potential to make significantly more money during his arbitration years. Longoria and the Rays reworked the deal in 2012, increasing his 2016 salary while adding six more guaranteed seasons and another $100 million dollars. Longoria, unlike many other Rays before him, showed loyalty to the franchise that drafted him out of Long Beach State and the Rays displayed a franchise-unique interest in extending Longoria long-term, something they did not do with players like B.J. Upton and Carl Crawford.

Here is a look at Pedroia's contract extension, which was signed after he won the 2008 MVP award.

What can we expect from Xander Bogaerts?

It's Xander's rookie season, and we're all excited, but what should we be expecting him to do?

Xander Bogaerts is the consensus no. 2 prospect, leading a pack of 10 Red Sox prospects to make the top-150.

What can we expect from Xander Bogaerts? Bogaerts leads 10 Sox in consensus prospect ranks

With Bogaerts being a Boras client, it's important to note that most of his clients wait out until free agency (e.g. Jacoby Ellsbury). However, some Boras clients have signed extensions before free agency. Andruw Jones signed an extension with the Braves while he was represented by Boras, but according to reports at the time, Jones and his father, Henry, negotiated the contract, not Boras.

The most notable contract extension given to a Boras client came whe Angels pitcher Jered Weaver signed a five-year, $85 million deal to stay in Los Angeles 15 months before he was scheduled to become a free agent. Weaver went against the advice of Boras when he agreed to the contract, saying that the lure of staying home outweighed the potential higher salaries elsewhere.