The Sox pick second-to-last in the first round, but extra selections bumped their draft budget up considerably.

The off-season is over for basically everyone not named Stephen Drew, meaning it's time to start looking forward to the next significant off-the-field event, June's 2014 MLB draft. MLB.com's Jim Callis is helping us on our way in that regard, as he's obtained draft budget information for all 30 clubs: the Red Sox have the 16th-largest budget of all teams, at $6,373,300.

While the Red Sox select second-to-last in the first round thanks to finishing with the second-best record in the game in 2013, a few teams sacrificed their first-round selections to sign free agents this past winter, which also meant giving up their most-significant chunk of their respective draft budgets. In addition, the Red Sox have an extra pick thanks to losing Jacoby Ellsbury to the Yankees, giving them a pair of first rounders that, while not doubling up on their first-round budget, does raise it considerably.

The Sox have 11 picks in the first 10 rounds, and if Stephen Drew signs elsewhere any time between this very moment and the draft itself, they'll have 12, with three of them as first-round picks, which would likely jump them to the outside of the top-10 rather than the 16 slot. Those 10 rounds and the picks within them are the ones covered by the $6,373,300 in the draft budget, but it's worth pointing out that, should a player outside of the first 10 rounds receive a bonus in excess of $100,000, that additional money counts against the initial 10-round budget. Boston's 2013 30th-round selection, Nick Longhi, received one such bonus, as the Sox paid him $440,000, or $140,000 more than they paid for their fifth-round selection. 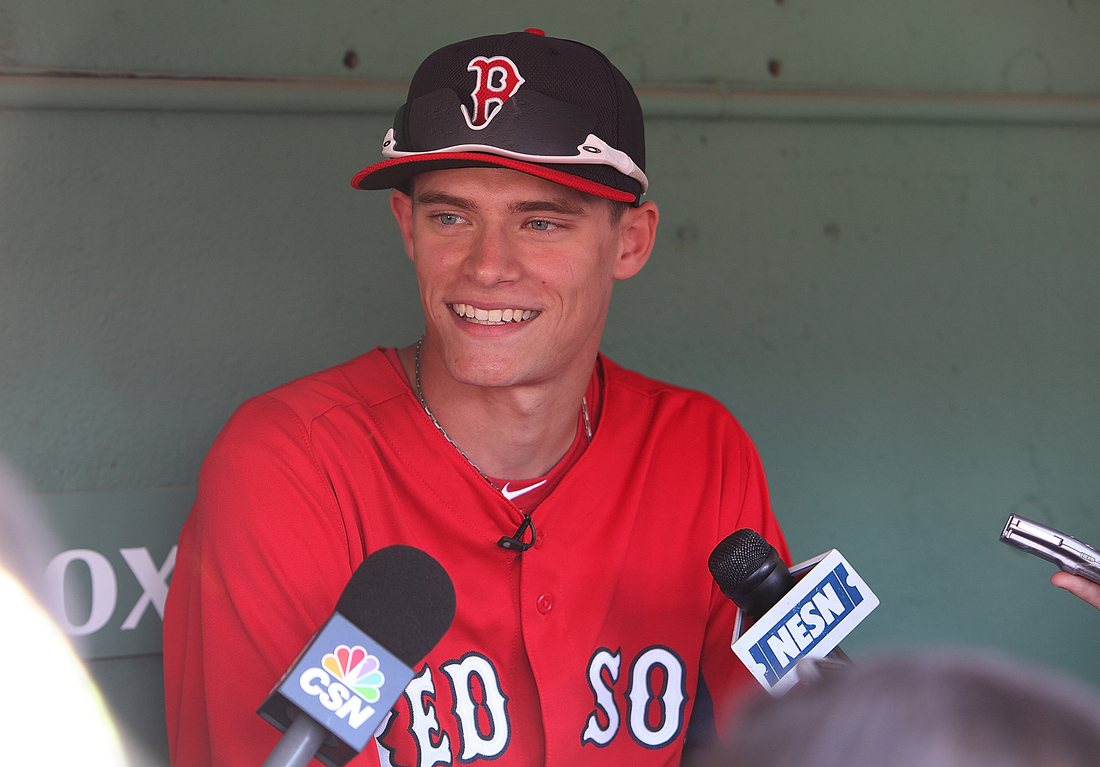 The Red Sox aren't limited to this $6,373,300 figure, though. A team can outspend their allotted budget by between zero and five percent, and the only punishment is a 75 percent tax on those dollars. More than a five percent overage is problematic, though, as the penalty isn't just a tax any longer, and instead requires a team to sacrifice next year's first-round pick. Outspending the budget by 10-15 percent costs a first- and second-round pick with the tax upped to 100 percent, and anything over 15 percent means the loss of two first-round selections in addition to the 100 percent tax.

What this means, though, is that the Red Sox can spend an additional $318,665 above and beyond their budget without incurring a penalty that's actually worrisome, bringing their overall "budget" to $6,691,965. A few hundred thousand here and there could be the difference between a draft pick walking away from a contract, or it could mean the Sox have some additional money to play with for their next Longhi-type selection. Again, if Drew signs, this allotted figure will only climb, as will whatever the five percent allowed overage is.

Mike Napoli has a new job as a presidential advisor on beards. Wait, what?

In 2012, the Red Sox went over budget, but only enough to be taxed the 75 percent on those dollars. In 2013, they were actually nearly $600,000 under budget, the product of failing to come to terms with a couple of players who had known signability issues who would have cost significant money. Don't take failure in the wrong sense, by the way: the draft is all about opportunities and chance, and not every one of Boston's dozens of chances worked out even before they hit the field. That's just how things go, and this time around, the Sox could bring home their tough signability choices, as they did with Ty Buttrey in 2012 and Longhi last summer.

The news on the international spending front is not quite as good, as the Sox have the second-least amount of money to play with at $1,881,700. The loopholes don't exist for international signings in the same way they do for the draft, though, just like with the draft, teams can go over budget to a degree without any serious repercussions. If a team stays below a similar five percentage overage, they are only taxed 100 percent on every dollar over. If they are between five and 10 percent, they are restricted from signing any player to a bonus of $500,000 in the following international spending period, with those penalties ratcheting up to over no signings over $300,000 for two periods at the greater than 15 percent level.

If teams want to take the chance that there will be an international draft within the next couple of seasons, though, then they could completely blow by their allotted international budget and sign whomever they want with little in the way of consequence. That's a dangerous game to play, though, and a topic for another day.