What's the difference between Jason Varitek and David Ortiz? For some, it's all in the "C".

Share All sharing options for: David Ortiz, and The Old Men and the 'C'

Dan Shaughnessy has learned a few things in his 33 years on the job, thank you very much. The most important, perhaps, is something also known by famous hucksters throughout history: Find your weakness and accuse your opponents of that weakness, even if there is a total lack of evidence. This is why "family values" politicians are nearly always the ones with second families, and anti-gay statespeople are often the ones hiding same-sex affairs from their spouses and children and constituents.

So when Shaughnessy calls David Ortiz "tone-deaf, selfish, and offensive" for seeking a one-year contract extension -- one year! -- it's hard for me not to read it as an indictment of the man lobbing the charge. Here is what amounts to a tenured Boston sportswriter telling an athlete nearing the end of his primary moneymaking career not to lobby for a single-season extension just months after leading the Red Sox to another World Series title.

Consider the environment, too: What's a one-year deal? The animating feature of this generation of Red Sox is that a precious few players get long-term deals, and the rest are set to plod along from season-to-season on make-good contracts. The problem is never really the money, especially for a team like the Red Sox with their robust farm system. The problem is the length of contracts, and the potential for long-term deals to screw up a very simple framework the team has going.

That framework is, effectively, no albatrosses. No four-year, $40 million deals to aging catchers like the one Jason Varitek received after the 2004 season, a deal so obviously bad they had to put a "C" on his jersey to cover up just how bad it was. Varitek was a fine player, but when "Captain Courageous," as Shaughnessy called him in violet tones, went for the jugular in the searing afterglow of the 2004 title, no one said shit about how selfish he was. He had earned it, after all. 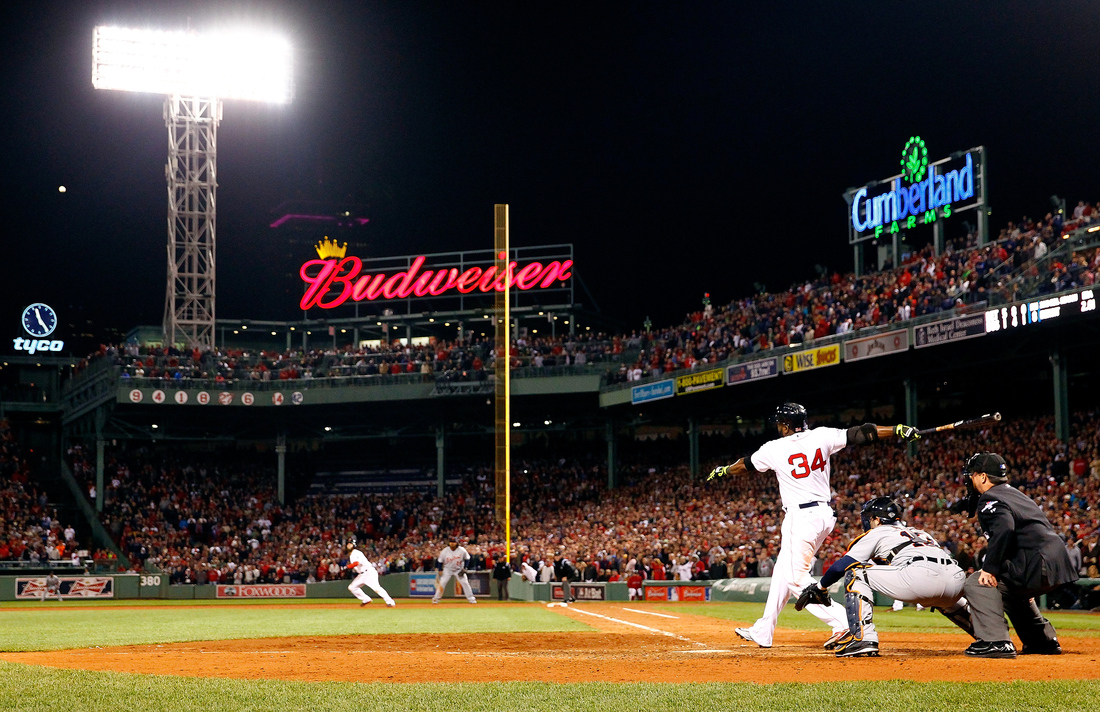 Has Papi not earned it yet?(Photo credit: Jared Wickerham)

"It's not every day you're lucky enough to sign a player who embodies everything you want your franchise to be," then-general manager Theo Epstein said at the press conference announcing the deal. "When you have that player, you don't let him get away." Varitek was understandably moved by the sentiment. "I don't really know what to say," he said. "If I can do half of what they did statistically, I'll be all right."

He didn't, really. He followed up with a 3.9 WAR season but cratered after that, reaching 2.3 in the 2007 championship season before eventually petering out into the single digits. He ended his career with a 24.3 WAR, far behind fellow captains Jimmie Foxx (96.5) and Carl Yastrzemski (96.0) and basically exactly half of Jim Rice, who at 47.2 had a career that lacked the long tail of the other three. It should be said, though, while it didn't show up in his traditional stats, he was a defensive beast until the very end. Not that this brings him to the levels of those aforementioned Boston legends, mind you.

Still, Varitek was very much "all right." The "C" on his jersey was designed to acknowledge this, and the symbolic value of all that money they owed him. Varitek was, after all, the guy who had shoved his glove in rival and near-teammate A-Rod's face during the regular season, a moment that the image-obsessed Shaughnessy lauded in 2012.

"Try to find a saloon in Greater Boston that does not have this photo somewhere behind the bar," he wrote. "It is the image of defiance. It is a memory of stepping up for yourself and for your team. It's a Red Sox captain saying ‘no more' to the bully of eight-plus decades. It makes Jason Varitek immortal."

The Red Sox announced the class of 2014, and it is stacked.

Maybe it does. Maybe it doesn't. Maybe it's just a footnote outside of Greater Boston, and that's okay to the people within it, because Varitek is forever theirs. Ortiz has threatened to walk if he doesn't get his extension, and it's hard to believe he won't, which is exactly why it's impossible to believe he won't be signed through 2015, given how many photos of his exploits surround that of Varitek's behind those various bars. It's possible they've run out of room.

Shaughnessy might feel differently if Ortiz had a "C" on his jersey, but it's more likely that this sort of boring, procedural professional move is precisely why he thinks Ortiz wouldn't deserve the extra thirty cents' worth of fabric stitched to his jersey. Ortiz is not merely a symbol, like Varitek threatened to be the moment he signed his deal: He is a player still very much in an extended prime, and arguably the most important player on a team who can easily afford lock him up for an extra 365 days, and who won the World Series on the strength of his bat.

Is he "tone-deaf, selfish, and offensive?" No. Is he "Captain" material? He's not; he's considerably better than that. Having him in the lineup is its own justification. He doesn't need the "C," even if he has earned it as much Varitek ever did. Nor does he need my help, even if I'm happy to provide it, or Shaughnessy's, or any of it. He's made his own case, and continues to make it, and that is good enough, because David Ortiz is famous as fuck.