It's time for Doubront to take that next step, or find himself lost in the rotation's upcoming transition.

Share All sharing options for: Felix Doubront's 2014 could determine his Red Sox fate

The Red Sox rotation will undergo a significant transition between now and this time next year. Jon Lester might sign elsewhere as a free agent, Ryan Dempster and Jake Peavy most likely will do the same, and the Sox could fill all of those holes internally with the likes of Allen Webster, Matt Barnes, Brandon Workman, and so on. Free agency isn't the only way the rotation could change, though: the 2014 season is the one where lefty starter Felix Doubront will likely determine his future with the Red Sox.

Doubront has been in the rotation the past two seasons, with an encouraging but underwhelming 2012 followed up by a 2013 that had its strong points, but also weaknesses that can't be ignored. He'll be 26 years old in 2014, in his final pre-arbitration season, and in his third full year of major-league starting: This is the campaign that needs to answer the questions surrounding Doubront, so the Red Sox know what they have and what they might need as their rotation evolves into its next iteration.

Before figuring out what he could be, let's focus on what Doubront already is. In his 2012 campaign, Doubront focused too much on strikeouts, wasting pitches that were continually fouled off by opponents, causing his pitch count to skyrocket too early in games -- this limited Doubront to just 161 innings over 29 starts, or less than 5-2/3 frames per outing. He was more efficient in 2013, with attempts to pitch to contact and utilize his secondary offerings more effectively working out for him: while his season ERA of 4.32 hides just how much more productive he was than the year prior, his 3.87 ERA over 155-2/3 innings as a starter tells the story.

Doubront's issues in 2013 came early, when his velocity was down and he hadn't quite figured out how to pitch with that problem, and also due to his pair of relief appearances. Of the 78 runs Doubront allowed over the course of 2013, 11 of them came in the 6-2/3 innings of relief he worked. As a starter, he was far better, striking out twice as many batters as he walked while limiting opponents to a 705 OPS despite pitching in the tougher league, the AL East, and with his home games at hitter-friendly Fenway. Not bad at all for the team's fourth starter. 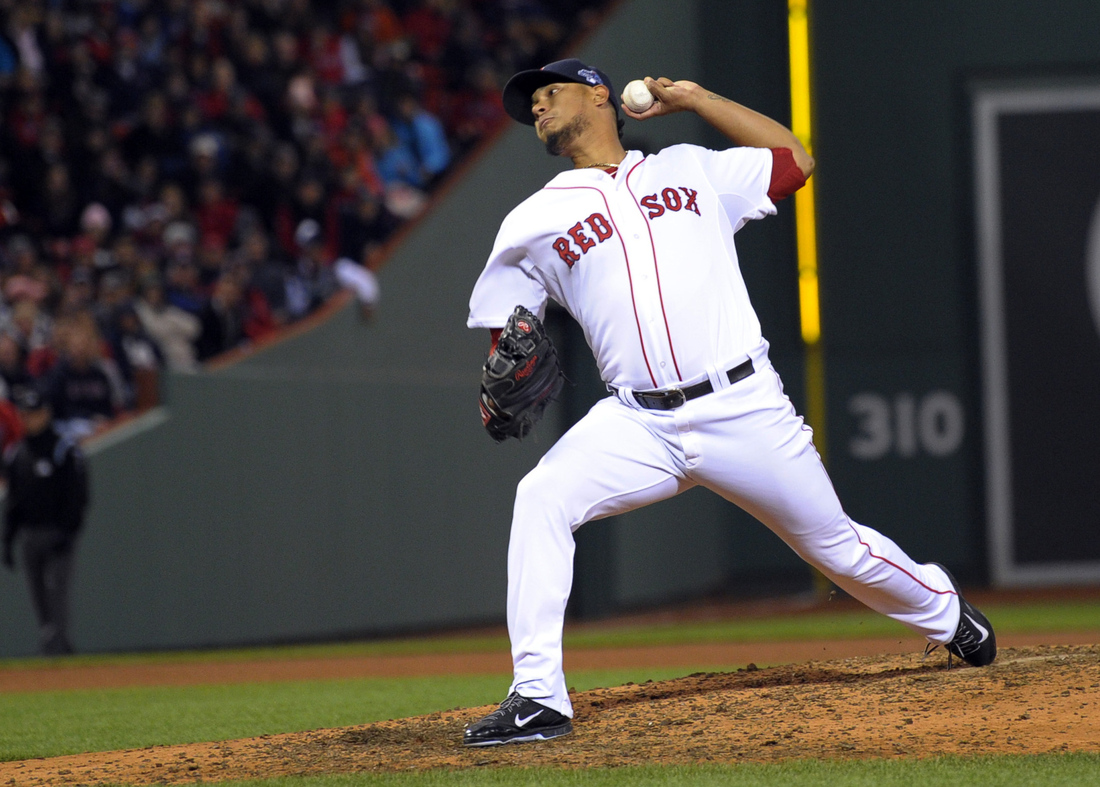 Doubront also upped his per-start work slightly. While the year began on the same inefficient notes of 2012, after briefly losing his rotation spot and reworking his mechanics in the bullpen, Doubront began to show improvement. Over his final 22 starts, where Doubront produced a 3.50 ERA and limited opponents to a .238/.315/.373 line, he averaged just under six innings per start. That might not sound like all that much, but if Doubront stuck in the rotation for a full season's worth of starts at that rate, he would finish with over 190 innings. With the kind of performance he's capable of, that's a hugely valuable starter, especially when still under team control: of the 296 pitchers who made a start in 2013, just 49 of them reached the 190-inning threshold.

The question for 2014, though, is whether or not Doubront can actually make a full season's worth of starts with that level of efficiency. Thanks to being skipped from the rotation on a few occasions due to his early problems and then the late-season construction of the Red Sox, who had six starting pitchers at their disposal once Clay Buchholz returned from injury, Doubront only made 27 starts. Between that and his pair of relief appearances, Doubront finished with 162-1/3 innings, just 1-1/3 more than the year before. Hypothetically, if he is left alone to make those missing five-to-six starts, he would have accumulated another 30-36 innings at his per-start rate, and approached 200 innings, but we won't know for sure if he's capable until he actually does it.

With a glut of catchers in the upper minors and majors, Lavarnway's time behind the plate might be at its end.

If Doubront can make 32-33 starts, and average about six innings per outing all while pitching as effectively as he did in 2013 as a starter, the Red Sox have themselves the kind of third starter a competitive team needs, a pitcher who can go out and give an above-average performance both in terms of preventing runs and in innings. That would take some of the pressure off of the kids in 2015, as they wouldn't need to hit the ground running and would get their own time to work up to their ceilings thanks to pitchers like Doubront already pitching at their own. If Doubront once again has mechanical issues that necessitate bullpen sessions and skipped starts, and can't maintain the consistency he found from mid-May through the end of his 2013 run as a starter, it's unlikely he'll come anywhere close to 200 innings, and probably won't post a better-than-average ERA in the process, either. He would still be a major-league starter, but a five, not a three or better, and the next wave of Red Sox pitchers would need to perform at a high level out of the gate to make up for it, or the Sox might have to dip their toes into free agent waters.

Considering the sheer quantity of pitching prospects in the system, if Doubront can't be more than a back-end arm, he's unlikely to be on the Red Sox for much longer. At his price, with a couple of years of service time left and the free agent cost of pitching what it is, someone would want to pry Doubront from the Sox -- possibly a National League team, since facing the pitcher would benefit Doubront's efficiency issues -- and Boston would have the prospects to fall back on to make that happen. The Sox will likely benefit post-2014 almost regardless of what Doubront does, but things will be much better for everyone involved if Doubront takes that next step in 2014 and becomes the reliable lefty arm the Red Sox need both now and later.