When Chris Capuano could have saved the Red Sox

Now, Capuano might just be a bit part, but it wasn't that long ago he could have saved the Red Sox' season.

Share All sharing options for: When Chris Capuano could have saved the Red Sox

The 2011 Red Sox had been a dominant force for months, but September 2011 was not going their way. Through Thursday, September 22, the Sox had played 21 games in the month, and had won just five of them, giving them enough failure to drop them out of first place in the American League East, 7.5 games behind the now division-leading Yankees. Boston clung to just a two-game Wild Card lead over the Tampa Bay Rays heading into the season's final week.

The Sox had two series left: a three-game weekend set against the Yankees in New York, and a three-game series against the Orioles in Baltimore. Boston's pitching had been at the root of their issues all month long, with the starters combining for a 6.82 ERA, 1.4 homers per nine, and just a 1.8 K/BB in their 21 games, averaging under five innings per start in the process, and now, they lacked a proper option for the series finale at Yankee Stadium that would took place on Sunday.

More from our team sites

More from our team sites

It should have been John Lackey's spot since he was working on five days rest, but his elbow had become problematic again. Early in the season, Lackey was crushed by opponents, and was eventually put on the disabled list after receiving a cortisone shot in his elbow. While his performance temporarily rebounded, it was clear by the end of the year that he had little left to give, and earlier rumors of Tommy John surgery (reported by Peter Gammons on Twitter) being the only fix for his condition started to make much more sense. Alfredo Aceves was an option, but with the way the rotation had struggled to rack up innings, the rubber-armed right-hander was almost necessary out of the pen so he could be deployed whenever he was needed: Aceves had already made eight appearances and pitched 17-2/3 innings in relief in September, and would throw an entire start's worth, another 7-1/3, before the season was out.

Then-manager Terry Francona had ruled lefty Erik Bedard out of the discussion for the Sunday start. Bedard, who had been acquired at the trade deadline in order to replace the injured Clay Buchholz in the rotation, had pitched well enough when he could make it to the mound, but did not do so often enough to help the Sox avoid their current predicament. He had also just been shelled in his previous outing, as he couldn't get out of the third inning against Baltimore, giving up four runs in the process. When combined with his final start of the season, a 3-1/3 inning effort against the Orioles once more, it's fair to wonder if the oft-injured hurler was just out of gas by season's end, and therefore not an option in a must-win game against the Yankees in Francona's mind, not if the Red Sox could find help elsewhere. 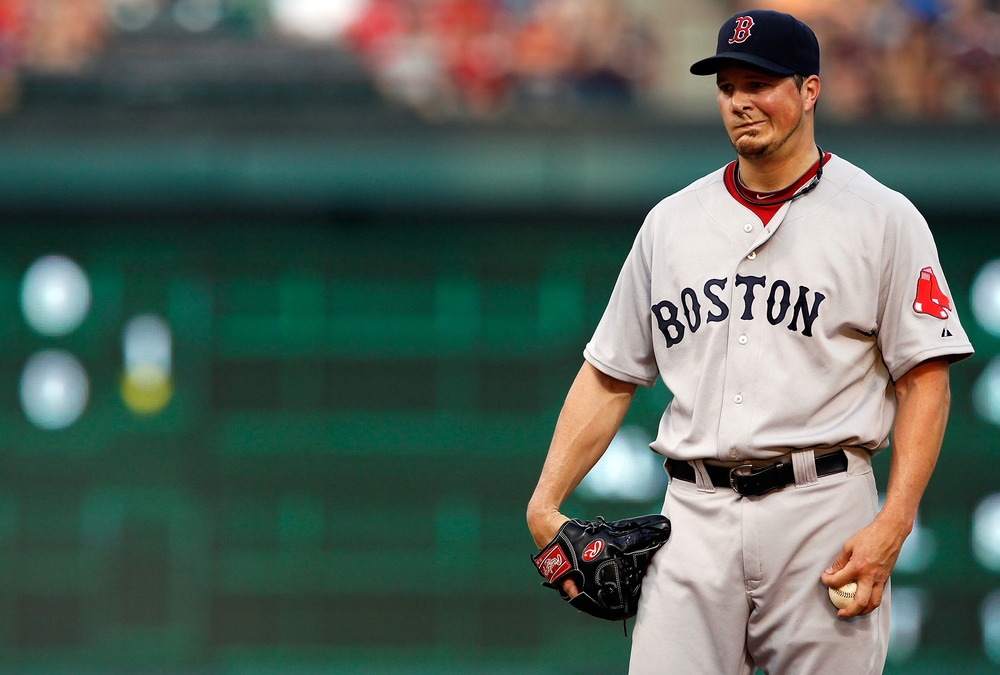 Don't worry, we made the same face during your last few starts too, Erik. Photo credit: Tom Pennington

That's exactly what they were trying to do on their final off-day of the season. The Red Sox had been in contact with the Mets in an attempt to bring Massachusetts native Chris Capuano into the fold in Boston to pitch Sunday against New York. The Boston Herald's John Tomase reported at the time that the Sox wanted Capuano because Yankees hitters were unfamiliar with him, and the team would be unable to perform advanced scouting on him since he wouldn't make a start between the time of the trade and the game the Sox needed him for. It wasn't just sleight of hand the Sox were looking for, though, as Capuano, despite an ERA that could have been better, could throw strikes and avoid walks, two things Red Sox pitchers had been having trouble doing all month long. Plus, even if Capuano's 4.55 ERA on the season didn't look all that special, it was more than two runs better than what the Sox rotation had managed over a three-week span of incessant losing.

It goes to show you how desperate the Sox were at this time that they were looking into Capuano, as well as another back-end lefty, Bruce Chen, to pitch one game in Yankee Stadium. Limiting the offense of lefty hitters in that park is a sound strategy for pulling out a victory, and when you combine it with the unfamiliarity angle, the Sox at least had a clear plan to give them an edge. The Mets were asking for too much in exchange for Capuano, however, and the trade never occurred: The Red Sox wanted to essentially buy Capuano for cash, something they felt the Mets would be amenable to as he was a free agent once the season was over, but that wasn't enough for general manager Sandy Alderson, who gave a few reasons for a trade falling apart. "It could be a number of reasons for it -- not getting back what you think is fair compensation, wanting to finish the season as strongly as possible, perhaps wanting to retain a player from one year to the next." Capuano would leave New York for the Dodgers and a two-year deal that off-season.

The Red Sox benefited from arguably the best outfield in baseball last year, but it's very likely they will see a dip in production from each spot in 2014.

The last of the major prospect rankings are out, and once again, the Red Sox are well-represented.

Capuano never got his chance to save the Red Sox, and it very well might have ended Boston's season. The Red Sox won their Sunday game at Yankee Stadium -- now part of a double-header thanks to a Friday postponement -- when John Lackey took the mound in spite of his elbow trouble, and gutted out six innings of four-run ball in a game Boston would take 7-4. You could say that nothing changed because Capuano wasn't acquired, but imagine, for a moment, that Capuano starts on Sunday against the Yankees, and the Sox see the win they were so desperately hoping for by pitting an unfamiliar southpaw in a park where he's needed. This could have left John Lackey available for the Monday or Tuesday start against the Orioles, changing the entire rotation for the final series that would see the Sox lose their Wild Card lead and end their season in shame.

While you can't guarantee a victory on either Monday or Tuesday, the possibility exists, especially given Lackey's performance against the Yankees, that he could have out-pitched either Monday's starter, Josh Beckett -- who allowed six runs in six innings thanks to homers to Matt Wieters and Robert Andino -- or Bedard, who, as mentioned, lasted just 3-1/3 innings, forcing the bullpen to once again pitch more than it should have, an outcome that very likely affected them the next evening as well, in what was yet another (and final) September defeat for Boston.

Capuano isn't in Boston for anything that grand this time around. He's a swingman who could stick in something of a LOOGY role depending on Boston's circumstances. He might not ever see a start with the Red Sox, as that all depends on the development of the kids at Triple-A, Capuano's own pitching, and whether or not an injury opens up a spot in Boston's rotation early. Given how things turned out when Capuano was truly a necessity for Boston just a few years ago, the Red Sox are probably okay with his diminished importance this time around.