With Jacoby Ellsbury gone, who should lead off for the Red Sox?

There are options, but all of them have faults.

Share All sharing options for: With Jacoby Ellsbury gone, who should lead off for the Red Sox?

Jacoby Ellsbury has been the obvious option to lead off for the Red Sox since the moment he began to see regular playing time in Boston. While he rarely had eye-popping on-base percentages, the combination of his baserunning ability and consistently high averages made him the top option to bat first, especially for a team that rarely had other speedy options. Ellsbury has moved on to the Yankees as a free agent, though, leaving the Red Sox in a position they haven't been for many Opening Days: without an obvious leadoff hitter.

Scan the lineup and see for yourself: there is no perfect option to bat first among what remains, despite Ellsbury's absence, an imposing local nine. There are players who could lead off but should bat elsewhere, such as Dustin Pedroia. There are high-quality hitters needed for the middle of the lineup, like David Ortiz and Mike Napoli, and potentially low-OBP bats in A.J. Pierzynski and Will Middlebrooks. Last, there is whichever of Jackie Bradley Jr. and Grady Sizemore wins the center field job: the fact there's a competition there at all should tell you it's unlikely either will be batting first.

Three regulars were not cited above, as they're the three who might make the most sense in the role. They are not without caveats, but someone has to hit first, and they are the least problematic of the bunch. Those three are left fielder Daniel Nava, right fielder Shane Victorino, and rookie shortstop Xander Bogaerts.

Nava and Victorino do not work as leadoff hitters without the other: Nava can't hit lefties, and while Victorino isn't terrible against right-handers, he's certainly no Daniel Nava. Were Victorino to exclusively bat right-handed, as he did during the last few months of 2013, this would be a different story, but the plan seems to be to go back to switch-hitting, if for no other reason than it'll likely keep him from breaking every bone in his body through incessant hit by pitches. That's an understandable reason for switching back, until Under Armour makes good on their name and releases a line of athletic chain mail, anyway. 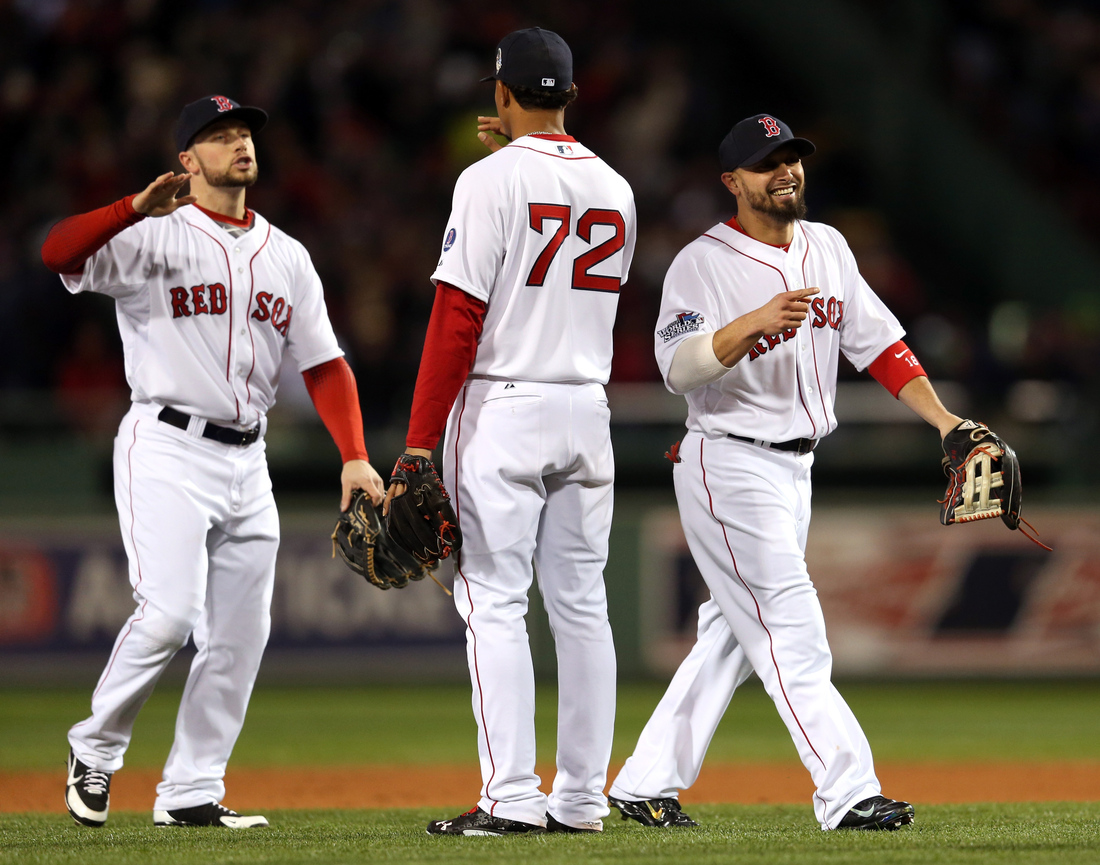 One (or two) of these three could and should lead off for the Sox in 2014. (Photo credit: Rob Carr)

In 2013, Victorino batted .314/.370/.491 against lefties in 188 plate appearances. That's right around his career level of .303/.373/.506, over a much larger sample of 1,413 plate appearances, and is the kind of production the Sox can expect out of Victorino going forward as well. That's hugely valuable for what it is -- his 2013 line was 33 percent better than your average righty against lefties, according to Baseball Reference's split-adjusted OPS+ -- but it's also against the wrong handedness: southpaws only throw about one-fourth of the innings in the majors each year.

Were Victorino to lead off by his lonesome, he would face right-handers -- who he is and has been susceptible too -- nearly 75 percent of the time. For as good as he was against lefties in 2013, Victorino couldn't put it together against righties -- at least, not when he was batting lefty -- and produced a below-average 91 sOPS+ in 225 plate appearances, courtesy a .274/.317/.389 line. For his career, Victorino is at a similarly unimpressive .268/.329/.401 from the left side of the plate: the Red Sox will see a significant downturn in production if Victorino bats in the leadoff spot all year long.

One week later, Stephen Drew's status with the Mets is no clearer.

If, however, the Sox don't want a platoon at the top of the lineup, there is an alternative in Bogaerts. He's unproven at the big-league level, of course, but he's also shown that it takes him little time to adjust after a promotion multiple times in his past. He's been lauded for his baseball instincts and IQ, has a tremendous approach at the plate, and while he's not particularly speedy or anything like that, he should get on base plenty and might even hit for some power -- he drew a free pass over 10 percent of the time in 2013, despite being one of the youngest players at each of the three levels he played at, and made a minor-league career out of lofty batting average on balls in play that should help him produce quality batting averages.

It would be an aggressive move to promote Bogaerts not just to the majors but to the top of the lineup, but it could help lengthen Boston's attack a bit, as it would allow Victorino and Nava to split time in the two spot, with Dustin Pedroia, David Ortiz, and Mike Napoli to follow.

It's unlikely Bogaerts gets this nod out of the gate, but it is an option for Boston. Given that Farrell and his staff work closely with the front office, though, and this roster has already bought in to the idea of shifting lineups, defensive shifts, and statistically informed baserunning, they can likely get away with splitting the leadoff spot between Nava and Victorino, depending on who is opposing them on the mound. Whether they will or not remains to be seen -- the Sox haven't said much about it to this point -- but it's the right thing to do.